Election result are in from Lebanon, and the pro-Western “March 14” parties are the big winner:

The March 14 alliance clinched around 70 out of 128 seats, maintaining its majority in parliament after defeating the Hizbullah-led alliance in Sunday’s crucial elections.

“We have lost the election,” said a senior politician close to the March 8 alliance. “We accept the result as the will of the people.”

More from Middle East News (via Monsters and Critics):

Beirut – Lebanon’s Western-backed majority parties celebrated Sunday after winning a crucial parliamentary election that pitted them against the Hezbollah-led opposition.

A close aide of majority alliance head Saad Hariri told the German Press Agency dpa: ‘So far we will have at least 70 seats in the 128- member parliament, and the majority is back to rule.’

Shortly after initial results were out, cars carrying the flags of the majority alliance cruised the streets of the capital, Beirut, their occupants chanting ‘God bless Hariri and the ruling majority.’

In the main Christian area of Ashrafiyeh, followers of the ruling majority gathered at the main square of the area and started dancing in the streets.

Photo of celebrations in Christian section of Beirut (AFP via Al-Jazeera): 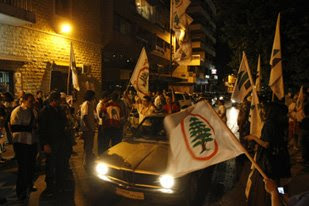 UPDATE: Expect more trouble in Lebanon, as Hizbullah is not taking the results well:

Hizbullah MP Mohammed Raad warned the March 14 coalition on Monday that the group’s weapons were not a subject open to discussion.

“The majority must commit not to question our role as a resistance party, the legitimacy of our weapons arsenal and the fact that Israel is an enemy state,” Raad told Agence France Presse.

He warned that the outcome of Sunday’s vote signaled further political turbulence.

“The results indicate that the crisis will continue, unless the majority changes its attitude,” said Raad, an MP who kept his seat in the new parliament. (AFP)

Thank God the Lebanese people didnt lose their minds.. the fire of freedom still burns in them – an absolute stunning result considering what happened in 2006 – Sinoria is truly to be respected.

I am sure Michael Totten is happy for his Lebanese friends.

the Israelis have dodged a major bullet for now.Netanyahu must be relieved that in addition to the pressure that he is getting from Obama, he didnt have to face a democratically elected Hezbollah Govt nect door.

Iran is the big loser here and to an extent Obama. He cannot now complain about how Israeli actions have led to a Hezb victory and how it is all because of the Palestenian problem and how it shows that Israelis need to stop expanding their settlements, blah…

Lets hope that Ahmedinejad also loses in the upcoming election.

Hezbollah will announce within days that it has won the elections, the people just don't know it yet. It has won because it did not die.

But Lebanon has died. The people quit fighting a while ago. Lebanon has no heroes to stand against Hezbollah. Just a bunch of people with ambiguity in their hearts. Not a staunch defender among them.

What a miserable death the country will suffer.