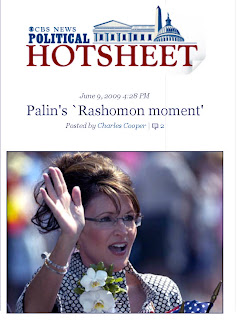 When I saw the link at Memeorandum, I did a double take: Palin’s `Rashomon moment’.

But yes, Cooper did sink that low.

Rashomon was an award-winning Japanese movie from 1950 about the rape of a woman and the murder of her husband, shot from the perspectives of each of the different actors. One of the points of the movie was to show how people involved in an event could view the truth of what happened differently.

The CBS News post appears to have been using Rashomon to show that different people could view Sarah Palin’s recent appearance at a GOP event differently:

Judging from the media’s attention to her every move since the November Presidential election, Sarah Palin may very well rank as the most fascinating contemporary American politician this side of Barack Obama.

But in the latest Chapter of Sarah Watch, a minor kerfuffle has erupted in the blogosphere over whether Palin’s attendance at a Washington fundraiser held on behalf of Republican House and Senate candidates Monday night (with the First Dude in tow, naturally) was a big hit or a non-event….

What happened next may go down as a Rashomon moment in the annals of Palin coverage.

Why a rape analogy? Cooper had to have known the significance of using Rashomon, since his post linked to a summary of the movie.

Although more subtle than the pathetic Letterman jokes, yet another example of the instinctively demeaning attitude at CBS towards conservative women, particularly Sarah Palin.

UPDATE: Dan Riehl disagrees with me on the use of “Rashomon moment” by Cooper:

I was tipped early to the vid by a non-blogging Republican source and posted on it at Noon. Cooper’s item, while published at 4:30, cited Politico and WaPo stories that were up late Monday night and early Tuesday morning, respectively. Add in some time lag for editing, that Cooper likely reads sites like the ones he mentioned and not the various small blogs this was playing out on at the time he published – and the fact that a Roshomon Moment has an established, independent standing as meaning the very type of phenomenon Cooper was observing … that’s a conclusion to which I’m not even close to jumping. Sometimes a cigar is just a cigar.

Added: Another e-mailer thinks I am off on this post:

The Rashomon is a standard trope. Almost nobody thinks of ‘rape’ when they hear it nowadays.

UPDATE No. 2. Sometimes we get things wrong. When we do we should say so. My first read on the CBS News blog post was that the point of using Rashomon was that Rashomon regarded a rape. With all the comments by David Letterman taking cheap shots at Sarah Palin, I took this as a another cheap shot. Based on the comments above, and Charlie Cooper’s comment in the comment section, I think that I was wrong, or at least Cooper’s explanation makes sense that he merely wanted to highlight how different people view the same event differently. So to the extent I did not understand Cooper’s point, I apologize.

——————————————–
Related Posts:
Where Is The Video Of NY Times Editors Butchering The News?
Why Do They Hate Sarah Palin So Much? She’s Happy
Are Anti-Palin Intellectuals Anti-Intelligence?

I will tell the truth, i never even heard of that movie until i read this post, so i don't know.

As for the 14 year old thing, i would guess that letterman doesn't even think deeply enough about Palin to even notice how old her daughter is. he read she went with her daughter somewhere, and so he made the joke about her getting knocked up. its more like a splash effect with the venom he is spewing toward Palin. He doesn't even have enough human compassion to think about who else he was hurting.

Really, i have never seen anything in my life like the sheer hatred of sarah palin. its hard to figure. i think its a weird combination of sexy conservative and yet paradoxically normal looking PTA mom type, who defies identity politics, and sits on a bear skin that her father shot. Oh, and she dared to take Obama down a few notches.

Btw, i think its funny that now suddenly democrats are concerned about sexual morality. How many women did Bill Clinton knock up?

If Sarah Palin is SO silly and irrelevant, why the obsession? Clearly the Left noted her appeal, and are out to eliminate the threat- it’s not like it’s not obvious.

And she’s been highly successful in life while ignoring the left-wing feminist model… this helps to explain the extra dose of venom in the attacks.

Of course, the Democrats are plenty afraid of Palin coming-back at them in 2012 with a dynamic and complementary VP like Bobby Jindal… or visa versa.

And they surely have reason to fear her- Palin is the most popular governor in the country… are all those people idiots? Alaska was a pretty corrupt system until she stepped in. Her reforms took on entrenched politicians (inc. Republicans), a mafioso-style union boss, and Big Oil.

Wouldn’t it have been nice if Obama had been principled and brave enough to confront the corrupt Chicago Democratic Machine?

Instead of doing business with every last one of them?

Go get em, Sarah- and don’t mind the press, nobody will be listening to them anymore after the pending Obamamania implosion- and once the ties of GE and others with media holdings to the Obama administration are fully exposed.

Yeah, I think you're reaching there. The key feature of the movie isn't the rape, it's the differing viewpoints. I have seen it, and until I read the words "rape analogy" in your post, the idea that Rashomon might be used as a "rape analogy" never occurred to me.

Just saw your post. I'm afraid that you missed the point of my headline entirely. As Lyford notes in the above talkback post, Kurosawa's movie is about how people can have sharply different perspectives about the same event.

Just saw your post. I'm afraid that you missed my point entirely. As Lyford notes in an earlier talkback to your blog, Kurosawa's movie is about how different people can have sharply different perspectives on the same event. That was my point.