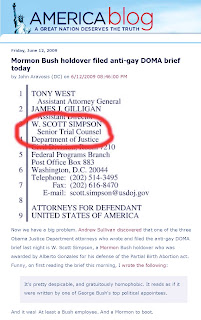 In the aftermath of the passage of California Proposition 8, which enshrined the traditional definition of marriage into the California Constitution, some gay marriage advocates engaged in anti-Mormon agitation, as I documented repeatedly. There were ugly scenes of protesters carrying signs urging a boycott of all Mormon owned businesses, and other conduct which only could be termed anti-Mormon hate speech.

Now this anti-Mormon sentiment has reared its head again, as a result of the Obama Justice Department filing a brief in support of the Defense of Marriage Act (DOMA). So what does this have to do with Mormons?

John Aravosis at AmericaBlog discovered that one of the signatories to the DOJ brief is a Mormon. Even though others also signed the brief, and the brief must have gone through a vetting process at DOJ, Aravosis chose to single out the one person who was Mormon for scorn:

No wonder the brief was so filled with hate and bigoted religious right talking points, such as comparing gay marriage to incest and pederasty. Obama let a Mormon Bush Justice Dept. employee create his public position on DOMA with the courts. This is really beyond the pale. I can’t wait until Obama let’s W. Scott Simpson write the brief in favor of overturning Roe v. Wade.

This anti-Mormon angle is being taken up elsewhere on the blogosphere as a result of the AmericaBlog post.

Want to argue that DOMA is unconstitutional? Fine. Want to attack the DOJ position on the merits? Fine. Feeling betrayed by Obama? Fine.

But singling out one DOJ lawyer based on his religion is despicable. And ultimately counter-productive. You can’t make the point that people should be allowed to love by advocating hate. 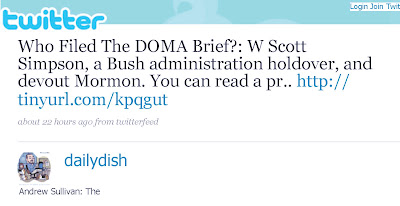 Added: Sullivan’s original blog post did contain the Mormon reference, but he removed it after a reader complained about it (h/t The Skeptocrats). Point of blogging practice: If you remove controversial information from your post, shouldn’t the post reflect the removal, such as with a strike-through or empty bracket?

And do we even know that this guy is Mormon? Americablog deduces that he is– because he has a first initial name! Because we all know that the WASP establishment never styles themselves that way– or goes to law school. The whole argument is basically absurd– that the Obama DOJ was hoodwinked on a major case into making the Mormon version of the case, by a midlevel guy who they have no real evidence is Mormon. But I guess the alternative is unthinkable– your Messiah sold you out. Can't admit that "Yes we can" was groupthink instead of a serious political platform, so… it must be those dirty Mormons!

The funny thing is that while Mormons don't agree with the homosexual lifestyle, they also have nothing against gay people. If anything, when a gay person finds out their Mormon friend supports things like Proposition 8 they are more likely to end the friendship than the Mormon. Mormons just don't want to be forced by the government to condone a lifestyle they see as wrong, which is a very real fear considering the tatters the Constitution is in now.

Plus, it's easy to attack a group of people who will bake you a casserole to try to make nice as opposed to somebody who will scream racism – or have it screamed for them.

As far as this Mormon is concerned, gay activists lost any sympathy of mine for their "plight" when, the day after the 2004 elections in Utah where gay marriage was handily defeated, I saw gay students at the University of Utah wearing purple triangles labeling them as "second-class citizens". As you may remember, the purple triangle was the symbol used by the Nazis to label the homosexuals, much like the Jews were forced to wear the Star of David. Classy.

As an aside, even in the heavily Mormon state of Utah not one gay student who was openly professing his homosexuality by wearing that triangle was attacked. I actually think people were more offended by being compared to Nazis than by the idea of having gay people in their midst.

Take clear note of Avarosis and the gay left.

These are the people to whom some want to extend marriage rights and to allow to adopt children.

Stop them now. Put them back in the closet. "NO" to gay marriage and "NO" to gay adoptions.

You're absolutely, completely right about singling that guy out.

I do have to address a response to hM, though

"The funny thing is that while Mormons don't agree with the homosexual lifestyle, they also have nothing against gay people."

They (by this I mean the church, not every specific individual) just don't think they should be allowed to visit their long-term partners in hospitals. My own experience, and easily inferred from the LDS Church's failure to support that plank of Equality Utah's Common Ground Initiative, as well as the documented actions of the LDS church during the initial discussions on hospital visitation rights in the Hawaii SSM discussions a decade ago.

I'm sorry but while that's not overt hate, that's hate disguised.

Does this have to do with gearing up for Romney?

It has absolutely nothing to do with hate. The church itself has a certain moral standard. Oddly enough, it keeps to that standard. It's not going to bend that moral standard or it's stance on issues to make other people happy. BUT, it also doesn't tell it's members how to vote. The church itself has set-in-stone stances on things, but the leaders have always told the members to research the issues and vote their conscience. So no, it's not about hate in any way, shape, or form no matter how much you'd like to think so.

The worst example of this is the pro-gay marriage blogger who found the DOJ position "legitimate" . . . until, that is, he found out a Mormon wrote the brief.

I just found your blog today. This post was one of the reasons I started blogging myself – against the hypocrisy I saw the gay activists use against religion after Prop. 8 passed. I'd appreciate it if you considered linking to my site as well.

Thanks and keep up the great work.

Salt Lake City has one of the biggest gay populations in the country per capita. Libs have no idea the amount of gays that hate them for the anti-Mormon, anti-Utah bullsh!t.