When Will The Europeans Apologize To Us?

When Will The Europeans Apologize To Us?

Barack Obama is on his apology tour of Europe. There is hardly anyone to whom he hasn’t apologized for American arrogance and mistakes. One thing Obama hasn’t managed to do is ask the Europeans to apologize to us for:

And we could go on and on. The history of the last 100 years is the history of the United States having to clean up Europe’s mess and to deal with Europe’s ego. So if there are to be apologies, they should travel from East to West, not the other way around.
——————————————————
Question: How many Europeans have died defending us? 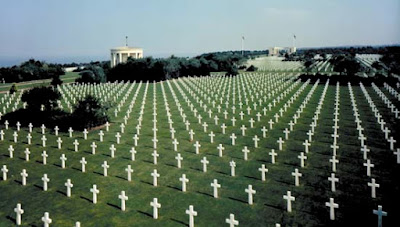 Related Post: Passover Is No Time To Wish For The End Of Christian America

It turns out (from personal experience and the personal experiences of people close to me) that if you go out into the European countryside and talk to the real people, they will often (upon finding out that you are an American) take you to0 the local cemetery — always well kept –where Americans are buried, and will tell you what they know, with obvious gratitude.

This was true in France even when the “Official” relationship was pretty estranged.

And I believe, as a matter of fact and record, that a lot of Europeans died protecting Americans.

And lastly, I suppose it is rude and noe-PC to ask, but does the name Lafayette mean anything to you?

I’ll give you Lafayette, but not de Gaulle.

Another good perspective by Mr. Jacobson. Larry your moral equivalency is sorley lacking.

Well Larry, you named one European who fought for America’s freedom (even though he did not die doing so), you only have half a million or more names to come up with to break even just for the last century…

I have two names, both Poles: Kazimierz Pulaski and Tadeusz Kosciuszko

Professor: Thanks for saying it, and saying it so well.

Actually, I would say that Great Britain and Poland are the exceptions. Poland has been and, for the forseeable future, will be a very large and unapologetic ally and friend of the United States. Great Britain…well, even after the slap in the face that Obama has been giving to them since January 20th, should go without saying.

This post has been linked for the HOT5 Daily 4/8/2009, at The Unreligious Right

Addendum to the Apology Touring President: William Jacobson of Legal Insurrection on The Obama Apology Tour ’09