The Somali Pirates Are Turning Into The Left’s Useful Idiots

The Somali Pirates Are Turning Into The Left’s Useful Idiots

If ever there were poster children for the term “useful idiots,” the Somali pirates would be it. They just don’t know it yet.

For years, Somali pirates have run amok off the east coast of Africa, taking advantage of private shipping companies, and taking various non-U.S. nationals captive. With wars in Iraq and Afghanistan, and no direct threat to the U.S., the G.W. Bush administration took little action against the pirates directly. Military action in east Africa was directed at al–Qaeda elements.

One would think, with all the hullabaloo voiced by liberal Democrats about how the Iraq war was unjustified because Saddam Hussein posed no direct threat to the territory of U.S., that the left would want to continue the Bush policy notwithstanding the Maersk incident. After all, the non-lethal attack on a single ship and the taking of a single hostage hardly compare to Saddam’s rape of Kuwait, violation of the ceasefire agreement, almost daily firing on U.S. planes operating under U.N. authority, theft of billions of dollars from the “oil-for-food” program to bribe U.N. and European officials, use of poison gas, suppression of the majority religious group, and oh yeah, the mass murder of Iraqis and day-to-day reign of terror.

But no, the Somali pirates need to be taught a lesson. Let’s go gettem is the emerging Obama administration policy, at least if this New York Times article is to be believed:

President Obama vowed on Monday to “halt the rise of piracy” off the coast of Africa, foreshadowing a longer and potentially more treacherous struggle to come, a day after Navy snipers rescued an American merchant-ship captain held hostage on the Indian Ocean….

“I want to be very clear that we are resolved to halt the rise of piracy in that region,” Mr. Obama said. “And to achieve that goal, we’re going to have to continue to work with our partners to prevent future attacks. We have to continue to be prepared to confront them when they arise. And we have to ensure that those who commit acts of piracy are held accountable for their crimes.”

And what might it take to stop all piracy off the east coast of Africa? Surely attacks on land-based training camps, villages, and other facilities which support the pirates, with loss of civilian life. According to Bloomberg news, while there are no plans for an invasion, the “U.S. military is considering attacks on pirate bases on land and aid for the Somali people to help stem ship hijackings off Africa’s east coast, defense officials said.”

In other words, if need be we will use 21st century weapons against guys in small boats who just want to provide for their families in a place thousands of miles from the U.S. Couldn’t this all be avoided if instead of attacking people who pose no direct threat to the territory of the U.S., we just stayed out of their neighborhood?

This narrative, needless to say, is asinine. The freedom of the seas is in the U.S.’s national interest. But the narrative parallels the left-wing’s narrative of Iraq, although in a much less compelling manner.

Yet how have those on the left reacted to Obama’s emerging “cowboy” actions in Somalia? Mostly with silence.

Those who are talking, are using the incident show that Obama really is up to the task of being Commander-in-Chief. Witness this post by a well-known blogger practically brimming with pride in Obama’s machismo and castigating those who claimed that Obama “could prove unwilling or unable to harness military might when necessary”:

And that’s a meme that just… doesn’t exist beyond some of the more fevered conservative imaginations. And not even that many fevered conservative imaginations! Since Obama came to office, he announced the deployment of 17,000 new troops to Afghanistan; expanded the scope of U.S. strategy in that war to include Pakistan; and then announced an expansive recommitment to both countries. His CIA director unequivocally announced, in public, that drone strikes are going to continue in Pakistan.

He’s winding down the Iraq war in a way that has the support from the commanding general. Obama is, accordingly, being accused by some of being a warmonger. (And let’s not forget that Obama chose the risky option of parachuting the SEAL team into the theater and having them work their ninja skills on the pirates to rescue Phillips. That suggests someone with not just a comfort level with using force, but an ability to distinguish between wise and unwise applications of it.)

It’s a stale trope of the media that a president who opposed the Iraq war is a rigid antiwar ideologue, but one unlikely to die from lack of evidence. “I don’t oppose to all
wars,” Obama famously told a 2002 rally against invading Iraq. “What I am opposed to is a dumb war.” Fancy that.

But is attacking the Somali pirates, even without a full-scale invasion, a smart or dumb war? Well if you accept the left-wing narrative of Iraq, then it would be a dumb war. But if you need to have Obama solidify his military credentials, then the Somali pirates are just the useful idiots the left needs.

No large scale invasion needed, just some firepower used out of camera range to prove The One is The Man. And on to health care reform, saving the planet, and wealth-redistribution.

UPDATE: See what I mean. This post from Crooks and Liars: Right-wingers who hit ‘President Pantywaist’ have egg on their faces after U.S. forces killed pirates. Hooah!

But there is dissent in the ranks. UN Dispatch is concerned that Captain Phillips and the crew may be the next Joe the Plumbers, in a post aptly titled, Joe the Sailors:

Calling for American leadership on an important global issue is not exactly making false claims about a candidate’s tax plans — and it’s something we agree with, to boot. The crew of the Maersk Alabama does actually know what it’s talking about — having been trained, through their union, no less, to thwart pirate attacks — but let’s hope Officer Murphy’s comments are not Wurzelbacher-ed into some sort of ubiquitous green light for pirate snipings.

UPDATE No. 2: See what I mean? A few dead pirates goes a long way towards establishing Obama’s military credentials: 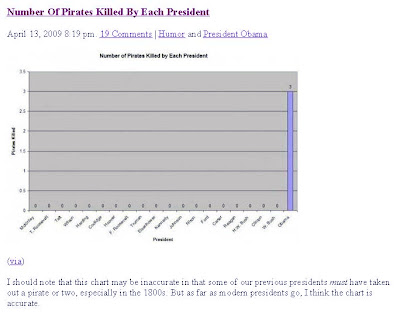 Technically, Professor Jacobson, they are the pirate’s useful idiots, not the other way around. The pirates know they are conducting sabotage and ransom on the high seas, disrupting
the vital Red Sea/Indian Ocean corridor, what the supporters of the pirates in academia is much more murky.

Nice post William, enjoyable read. You can’t doubt that the US took care of the situation, but we’ll have to wait to see what the long-term consequences of how they handled it will be. Still, these are some reasons to be a pirate, and getting shot by snipers isn’t one of them: http://www.toptentopten.com/topten/reasons+to+be+a+pirate

As you said for years pirates have been operating off the Somali coast. If Bush had bothered to do anything about it Obama wouldn’t have to, but Bush was busy invading Iraq for no reason and running the economy into the ground.

So, let me get this straight. We have pirates who merely ‘want to provide for their families’. I had no idea they were so altruistic! What happened to the pirates who stole and killed for their own gains? Given that these pirates get millions of dollars in ransom, I’d say their families are doing pretty well – certainly better than I am.

And now that someone is actually going to *do* something about it, you have a problem.

Yes, your logic is completely sound!

Let’s not even get into your definition of ‘dumb war’. Iraq was a dumb war not because we invaded, but because the job was botched on an epic scale. There’s a difference there but from what I can tell from you’re writing, nuance isn’t your forte.