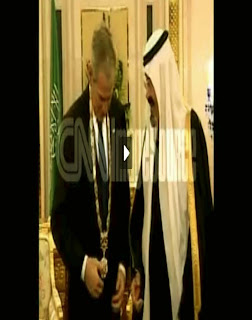 President Barack Obama bowed down on bended knee when meeting the King of Saudi Arabia at the G-20 Summit recently. The incident is on video and was widely reported except in the U.S. mainstream media. The White House spin machine has been eerily silent on the issue, which is not like them.

Many critics of Obama have spun the incident as a sign of Obama’s subservience to the nation which provides so much of our oil, or worse, bring back the lingering doubts about who Barack Obama really is. But was the bow a sign of fealty, or something else?

Obama’s European trip has been characterized by Obama’s frequent apologies for alleged American arrogance and transgressions. This is part of Obama seeking to heal the world by bringing the U.S. down; or as some have said, signalling an end to the concept of American exceptionalism.

I have not seen any reports, however, of Obama apologizing to anyone other than Europeans. Perhaps the bowing down was a form of apology, a physical manifestation to the Saudis of what Obama expressed in words to the Europeans. The concept of bowing down as a form of apology is not new. When Bangladeshi author Taslima Nasreen was accused of insulting Islam, clerics and government officials demanded that she bow down in apology (emphasis mine):

Union Information and Broadcasting Minister Priya Ranjan Dasmunsi Sunday said controversial Bangladeshi author Taslima Nasreen should apologise with “folded hands” for hurting the sentiments of Muslims of the country, and hinted that her book “Dwikhandito” could be banned.

Talking to reporters in Malda in West Bengal, he said: “We are a pluralistic nation and we respect all religions. I love literature and I have nothing against her writing. But that does not mean she can use her pen to insult and hurt the religious belief of the Muslims or for that matter any religion.”

“The comments made by her in the book in question were uncalled for. She should bow down before the people whose sentiments she has hurt and apologise with folded hands, and expunge those pages from her book,” Dasmunsi said.

Until Obama explains, we won’t have his side of the story. Maybe this is all about nothing.

Charles Johnson of Little Green Footballs thinks this whole “bowing” incident is nonsense, and to prove his point, has posted a video of President George W. Bush bowing to a Saudi monarch under the title Bush Bowed Too. Now I like reading LGF, and it has done great work exposing the Paliwood industry of staged Palestinian massacre videos and photographs.

But in this instance, the post is misleading. The screen shot in the post shows Bush appearing to bow, with the King’s hands slightly raised. But if you watch the video link, it is clear that Bush was not bowing, but merely bending down so the King could put a medal attached to a ribbon over Bush’s head. [The screen shot upper right shows the medal on Bush immediately after the supposed “bow”] Given Bush’s height, there is no way the King could have put the medal on him without Bush slightly bending.

Obama bowing on bended knee as a form of greeting, and Bush bending to receive a medal, are nothing alike. And the videos prove it.

——————————————–
UPDATE: Not surprisingly, the misleading LGF screenshot is getting a lot of play on the blogosphere, including at the liberal blogs Liberal Values and The Moderate Voice (and probably more to come – the screen shot is just too good for Bush haters to pass up). The screen shot will take on a life of its own, and like so many other misleading images, become reality. I really can’t understand what LGF was thinking.

UPDATE No. 2: Now wait a second. LGF has added a sentence to its post, “And just imagine how much screaming there would be if Obama had let Abdullah hang a medal around his neck.” I don’t think that was not in the original, and it contradicts the image created by the screen shot of Bush “bowing.” The original post did not say that Bush got a medal as the title “Bush Bowed Too” reflects that the post intended to equate Bush’s actions to Obama. Not good procedure considering that the screen shot will be spread far and wide. Further update: Can’t determine if that sentence was in the original, but if it was, why do the post at all? Why not just make the case that the Obama “bowing” is nonsense without the misleading screenshot and title.

UPDATE No. 3: Unfortunately, this is how images get into the public consciousness, in automated links such as this one at Boston.com. Interestingly, the left-wing blogosphere has been relatively quiet on this (perhaps they realize the screenshot and title do not match the actual video), but the automated links will spread the photo and title far an wide.

UPDATE No. 4: Doesn’t anybody actually watch the videos they link? Or don’t they care. First it was the LGF screen shot of George Bush “bowing” to the Saudi King, which he clearly did not do as the actual video shows. Now it is a post titled Obama Bowed, Bush Danced at Politics and Critical Thinking, which links to a video of Bush “dancing.” But the video shows no “dance,” just Bush holding a traditional Arab sword with the slightest of sways presumably to some music (hard to tell because the video is a newscast with the announcer speaking in Arabic). Exaggeration, hyperbole, you name it; but the Obama video is crystal clear. We are still waiting for the explanation of why Obama did what he did.

UPDATE No. 5: Hot Air comes in with this point (and thanks for the link!):

Claiming this to be a bow would mean that recipients of the Medal of Honor have a requirement to show submission to the person who gives it to them, when in reality it’s the only way to get the ribbon over the head. The same thing is true for Olympic athletes who win medals. They’re not “bowing” and showing submission to the judges; they’re bending to allow the ribbon to go around their neck.

Here is what Charles Johnson wrote on that thread when confronted with the fact Bush hadn’t in fact bowed:

“Oh please. “Technically” not a bow? This is silly.

America has been bowing to these throwbacks for decades.”

He then proceeded to add that last sentence to the post. Fist he was unfair, then he was dishonest.

You may enjoy reading LGF, but I can no longer do so.

The LGF screenshot IS misleading. Bush wasn’t bowing, he was leaning over so the shorter-than-him king didn’t have to reach to put a medal on him.

Obama was bowing out of respect, though inappropriately. The Saudi king should be bowing to HIM since America is the (much) bigger fish.

Most likely Obama was purposely trying to show exaggerated respect b/c he’s trying to “repair” America’s allegedly damaged image. This act strikes me as diplomatically naive, as have many other Obama diplomacy moments.

It may be that Obama merely was engaing in (to me an inappropriate) act of “respect,” so why doesn’t he or his communications people say so? Very strange indident made stranger by the lack of response from Team Obama who usually are all over a story within minutes.

You’re right, Bush just held his hand… This is a non-issue, so get over it.

Amen, Sorge. I got banned for saying Charles was lying, which he was. I made the same points that are being made here. He sees, but he does not comprehend. I may eventually do a stealth re-register without ever posting so that I can get some of the benefits again (advanced searches of the site, etc.) but knowing that the blogger I used to admire most has gone off the deep end is kind of depressing.

I stopped reading LGF months ago, believe it or not over the Creationism issue, which I believe Charles is misrepresenting. I am not a Creationist and in fact I believe them to be wrong – it is the young earth thing that really gets at me. The reason I disagree is that I feel that high school students should investigate all sides of the argument 🙂

Now, let me deal with the immediate issue of the “bow”. First off, it is obvious that GWB never bowed on bended knee to a Saudi king or prince. It is obvious without watching the video that GWB received a medal, and he would have to bend to get the ribbon over his head. That is not an act of submission.

However, the action of Obama could easily be parsed as an act of submission to Saudi Arabia. As a head of state, Obama had no right in bowing to either the Queen of England or to the king of Saudi Arabia. He is on an equal level to both of them. What we have to look at, therefore is how this bow is interpreted. To do that you need to know something about Islam and something about submission to the caliph. The Obama action is one of submission to the caliphate. There was no requirement for him to take that action. It was inappropriate, and there is only one way to see that action – he was giving Saudi Arabia the green light to laud it over the USA.

It is really something that is quite pitiful. I feel sorry that you have 3 years of this man.

Thanks for correcting the record on that. That was not a bow. Good work.