Did you hear the one about the person Sarah Palin picked for Attorney General of Alaska? He defended the right of the Ku Klux Klan to express its abhorrent speech. Over at Huffington Post, blogger Sam Stein is outraged, outraged I say:

Sarah Palin’s choice for attorney general once wrote a column defending the statue of a KKK figure as an expression of free speech and mocked the psychology of a college student who protested the display.

At Washington Monthly, the sarcasm is palpable: “I guess the governor’s vetting team is about as good as John McCain’s?”

These bloggers are not stupid. They are just playing the game. Defending the rights of abhorrent groups to express their opinions is as old as …. the ACLU. I wonder what Russ Feingold thought of the ACLU defending the Klan’s right to march in Madison, WI, on Martin Luther King, Jr.’s birthday:

January 4, 1999 — The Ku Klux Klan will be allowed to have its rally at the Capitol on Jan. 16 — Martin Luther King’s birthday.

The state had originally refused the Klan’s petition to gather at the Capitol, saying it would incite violence and cause harm to public safety.

But the American Civil Liberties Union stepped up in defense of the Klan and represented the white supremacy group in Monday’s hearing before U.S. District Judge Barbara Crabb.

And what Al Franken thought of the ACLU coming to the Klan’s aid in Minnesota:

In response to growing concerns over permit applications filed on behalf of the Ku Klux Klan and local KKK opposition group Can The Klan, the Minnesota Civil Liberties Union today is demanding that the Department of Administration grant the applications of both groups to rally on the capital by Friday.

We could go on and on with these examples. Under the reasoning of these bloggers, anyone affiliated with the ACLU should be barred from public service because the ACLU defends the Klan’s freedom of speech. 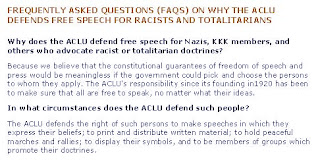 So these bloggers should be calling upon Obama to withdraw the nomination of “ACLU-trained” nominee to head the Office of Legal Counsel, Dawn Johnsen. Just like some groups on the right are demanding.

I don’t think that will happen. After all, it’s just a game. And that’s too bad, regardless of who’s doing it.

Typical pus, bile, and bromide from the Huffies, and of course A.M., a little more highbrow (so we’re led by the nose to believe) is never far behind on some issues.

The ACLU has long defended the right, as did the Palin pick for A.G., to say just darn near anything you can so much as fit on a grungy t-shirt or chisel into stone.

(With the noteworthy exception for the ACLU no doubt nixing that right when it comes to statues of Jesus or a Nativity scene on public land).

The idiot bloggers are just smart enough to know this, yes, but this puerile giggle-fest is dangerous to conservatives in the long run.

Imagine a world in which you fairly much have to walk on eggshells, like Palin, for merely having a connection to someone who defends unpleasant speech, etc.

That day is close, if not already here.

I grew up with the Klan in a small southern town,so I have a very good understanding what they are all about. While I do disagree,even loath what they stand for,they do have a right of peaceful assembly and free speech,that I will defend of any group,even those I strongly disagree with. For,if theirs are stripped away,it will on be time before mine are. Hence the law of unintended consequences.