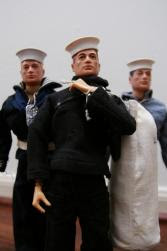 Well, that didn’t take long. The crew of the Maersk Alabama, including Captain Richard Phillips, are being warned not to give advice on attacking pirates, lest they become “Joe the Sailors.” And we know what that means: Smears, caricatures, investigations, and abuse from the netroots.

This from the UN Dispatch blog in a post aptly titled, Joe the Sailors, accompanied by the photo (right) of GI Joe Sailors:

Yes, they were the ones who heroically defended their ship from a full pirate takeover, but it seems a little presumptuous for the crewmembers of the Maersk Alabama to be advising the U.S. president on anti-piracy policy.

They were not “advising” the President. They were stating their opinions, loudly and clearly, as they are allowed to do. To some, when ordinary people express an opinion on important matters, it’s called “presumptuous.” Capt. Phillips and the crew have as much right to opine on piracy, something they have studied and experienced, as the author of UN Dispatch has to opine in The Guardian that the U.S. should participate in the anti-Israel Durban II conference, or to criticise the truly heroic Nathan Sharansky.

And there was no cause for this thinly veiled warning:

Calling for American leadership on an important global issue is not exactly making false claims about a candidate’s tax plans — and it’s something we agree with, to boot. The crew of the Maersk Alabama does actually know what it’s talking about — having been trained, through their union, no less, to thwart pirate attacks — but let’s hope Officer Murphy’s comments are not Wurzelbacher-ed into some sort of ubiquitous green light for pirate snipings.

Note the reference to Joe Wurzelbacher (“Joe the Plumber”), the plumber from Ohio who had the audacity to ask obvious questions about Obama’s tax plan and express an opinion that was not convenient for the Obama campaign. And we know what happened to Joe. Unlawful access of this private records by Ohio state officials, and general demonization by the netroots and mainstream media.

What is the doughboy afraid of?