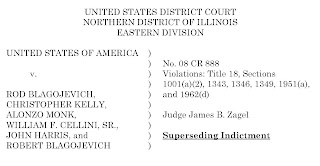 The other defendants are Christopher Kelly, Chairman of Friends of Blagojevich; Blagojevich’s brother, Robert; Alonzo Monk, former chief of Blagojevich’s campaigns and a key fundraiser; William Cellini Sr., a Springfield businessman who was a long-time associate of Blagojevich; and John Harris, former Chief of Staff in the Governor’s Office.

A detailed explanation of the RICO (Racketeer Influenced and Corrupt Organizations Act) is contained in my prior post, Will Blago Meet RICO? Yes, Blago has met RICO.

The Indictment alleges a conspiracy running from 2002 until December 8, 2008 (when Blagojevich’s conduct was exposed by the U.S. Attorney’s Office), in which the Enterprise acted “to excercise and preserve power over the government of the State of Illinois for the financial and political benefit of Rod Blagojevich both directly and through Friends of Blagojevich, and for the financial benefit of his family members and associates.” (par. 3)

The nineteen Counts in the Indictment contain allegations which mostly have surfaced before, including alleged attempts to sell Barack Obama’s open Senate seat in exchange for campaign contributions and a possible job for Blagojevich after leaving office, attempted extortion of campaign contributions from Chicago Children’s Hospital, attempted extortion of a racetrack owner, and attempts to have Blagojevich’s wife, Patty, benefit in her real estate business: 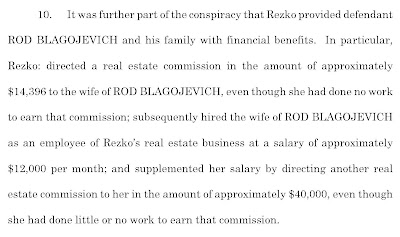 There were some new allegations, as reported by the Chicago Tribune:

While those allegations are repeated in today’s charges, the 19-count indictment also includes allegations that convicted insider Antoin “Tony” Rezko steered real estate commissions to former first lady Patti Blagojevich despite her performing no work and paid cash to Monk for a car and home improvements. The indictment claims Blagojevich attempted to extort a U.S. congressman for campaign cash by withholding a $2 million state grant to a public school in the congressman’s district.

All told, the ex-governor faces 16 felony counts, including racketeering conspiracy, wire fraud, extortion conspiracy and lying to federal agents. The government is seeking forfeiture of $188,370 from Blagojevich and will try to take his Ravenswood Manor home if needed.

Obama fundraiser, supporter, and neighbor Rezko is mentioned throughout the Indictment as being a key participant in the Blagojevich Enterprise, but is not a named defendant. Valerie Jarrett, Rahm Emanuel, and Roland Burris, all of whom played a prominent role in the posturing surrounding Blagojevich’s impeachment, are not mentioned in the Indictment. But the Indictment does reference contacts with persons believed to be in contact with Obama: 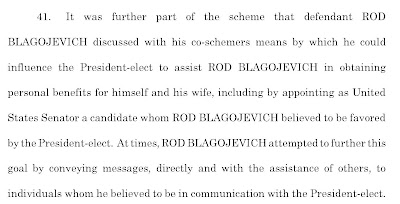 For an extensive history of the Blagojevich saga, read my prior Posts on Blago (all 56 of them!). Or if the thought of reading 56 Blago posts is too depressing, try some of these recent posts:

Obama Gives Queen iPod Made In China By Exploited Workers

Ted Stevens Conviction Reversed, But What About The Election?

I love your blob. I wondered if you saw this poorly reasoned article from Huffington Post yesterday. Seemed like your bailiwick.