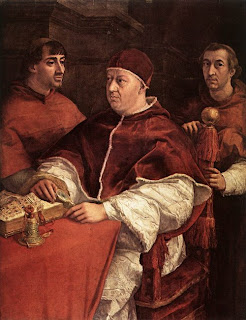 “President Obama should yank the reins and get his staff’s noses out of slash-and-burn petty politics. His own dignity and prestige are on the line. If he wants a second term, he needs to project a calmer perspective about the eternal reality of vociferous opposition, which is built into our democratic system. Right now, the White House is starting to look like Raphael’s scathing portrait of a pampered, passive Pope Leo X and his materialistic cardinals — one of the first examples of an artist sending a secret, sardonic message to posterity. Do those shifty, beady-eyed guys needing a shave remind you of anyone? Yes, it’s bare-knuckles Chicago pugilism, transplanted to Washington.”

Camille should check out some images of the Medici or perhaps the Doges of Venice. For my money, that’s where you find the intersection of venal greed and self-aggrandizing political correctness that Obama and friends swim.