Phony Outrage Over “Armed And Dangerous”

Phony Outrage Over “Armed And Dangerous” 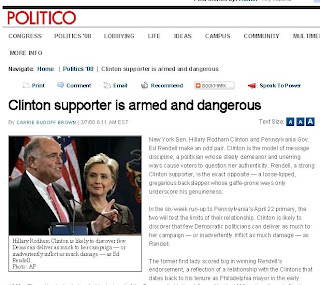 Conservative Republican Congressman Michele Bachmann has come under fire for stating that voters should be “armed and dangerous” over the administration’s engery tax plans. While the leftwing media tried to twist this statement into a literal call to arms, in fact Bachmann was using a metaphor for public outrage.

Bachmann is not the first to use such a metaphor. In an article at Bloomberg.com which has been widely reprinted, titled “Obama Needs To Find His Inner Dirty Harry, columnist Margaret Carlson used the phrase:

It’s up to the new sheriff in town to put things right. President Barack Obama has replaced the laissez-faire Bush administration officials, like Wall Street sympathizer Henry Paulson, with armed and dangerous regulators who would bring reckless Masters of the Universe to justice.

ARMED AND DANGEROUS – Americans enjoy among the best free speech and 0pen-government laws in the world. But such freedoms mean nothing if journalists
and citizens don’t know how to use them. Get the weapons you need to make your work more competitive, compelling and controversial.

So it’s all about context, and not pulling phrases out of their natural and intended meaning. Clearly, Bachmann was not calling for armed insurrection, just as Politico was not calling Ed Rendell a criminal threat to Obama, and Margaret Carlson was not calling for regulators to open fire.
But in today’s gotcha media environment, where left-wing blogs and media organizations scour transcripts for a phrase which can be twisted, context and truth have no place.