The difficulties facing The New York Times are well documented. Falling circulation, revenues and credibility; rising costs, incredulity, and debt. But it looks like the Times has hit upon a strategy for survival: DEATH.

The death strategy has not been announced, but is evident on the Times’ website. On the day the Times rolled out its new Global Edition online content, both the U.S. and Global editions featured, front page and center, DEATH. The screen shots (taken at the same time) below feature DEATH in the U.S. in the form of a shooting at a nursing home (“8 are Killed in Shooting at a Nursing Home”) with a photo of the police gingerly holding the rifle used; the World edition features DEATH at a soccer match in The Ivory Coast (“22 Killed in Stampede in Ivory Coast”) with a photo of men carrying the limp body of a victim.

Has Nancy Grace taken over the Times’ web page? Is Geraldo on a plane to the Ivory Coast for an exclusive Times interview with the person who started the soccer riot? Will the Times get the worldwide web rights to a previously unseen Jerry Springer episode where grandpa choked grandma until her hair turned a natural shade of blue?

DEATH sells, and if that’s the case, the Times needs DEATH now more than ever. 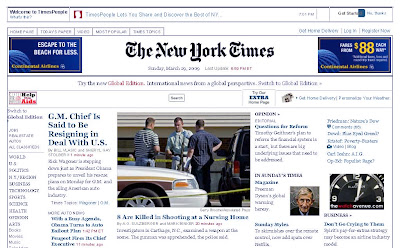 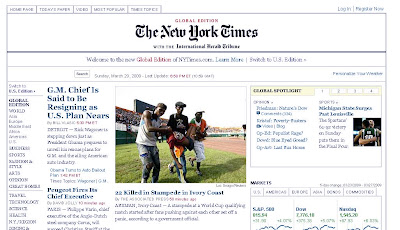 Remember Seabiscuit ? Hope and change I believe sells better than Death and destruction.