“This is the worst economy since the Great Depression!” How many times have we heard that phrase in the past six months? Put aside that by almost every measure (particularly the unemployment rate) that statement is outright false. Nonetheless, that argument is used to justify a move towards a European-style government-controlled economy.

By contrast, European unemployment rates in the larger European countries consistently have been higher than the current U.S. rate. The chart below (click on chart to enlarge) shows that through 2006 (and thus excluding the current worldwide economic problems) in France (FR) the unemployment rate has ranged in the low double digits for most of the past decade; in Germany (DE) in the high single digits; in Spain, in the mid-to-high teens. 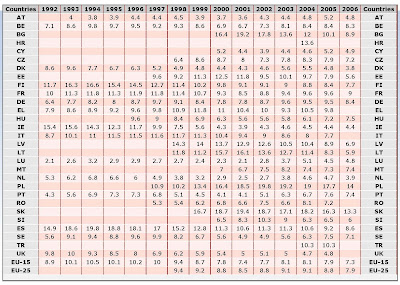 A European-style economy holds no viable future for the U.S., unless we really do want the worst economy since the Great Depression.

A big problem is that very few people in the U.S.know all that much about Europe, nor the various economic problems and government-intrusive policies that exist there. In U.S. colleges Europe is viewed through rose-colored glasses to put it mildly, and for many people that idealized impression remains.

Can we call it a stimulus for the rich?

Actually what you have hit is the worst unemployment since the Reagan years.