Posted by William A. Jacobson Thursday, February 12, 2009 at 09:55am 0 Comments
More Sharing Options 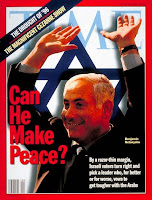 Hardly anyone reads Time magazine anymore. I say “anymore” for those people under the age of 40, who are too young to remember a day when Time represented the gold-standard of weekly news publications. If it weren’t for an occasional visit to a doctor’s waiting room, I’m not sure I’d know that Time still existed, except that Yahoo News sometimes runs Time articles.

Time’s circulation has been dropping for years, and last fall its parent company, Time, Inc., laid off 600 staffers. To some extent Time’s problems reflect the print media industry’s problems, but more pointedly, Time has become largely irrelevant except for its “Person of the Year” award designation.
In the last few days, Time came to my attention through Yahoo News because of the provocatively anti-Israel headlines and stories, such as Israel’s Election Dashes Hopes for Peace. Interesting take on the only free and fair election in the Middle East, in which the Israeli population split pretty much down the middle with a small shift to the right. The end of hope for peace? What hope and what peace is Time talking about that has been “dashed”?
Then there’s this Time article, How Israel’s Anger Issues Hurt Us All, authored by the mostly-forgotten Joe Klein. And After Israel’s Election, Palestinians Weigh a New Intifadeh. So you get the picture — future Palestinian violence is caused by Israel, and any anti-American fallout is Israel’s fault.
What’s going on here? In the course of just a couple of days, Time has gone out of its way to portray Israel as the sole source of Middle East violence and the source of future violence. Time seems to be cheering on a new Intifadeh (the last one, instigated by Yassir Arafat to gain bargaining leverage, killed hundreds of Israelis in suicide bombings and even more Palestinians in reprisals and led to the building of the West Bank security wall).
Time has a long history of anti–Israel bias, including covers that focus blame on Israel (photo – 1996 cover warning the Bibi Netanyahu’s election as Prime Minister signalled problems for peace). But the focus is so harsh now that one can only conclude that the current anti-Israel agitation represents a business strategy.
Time seems to be going after the anti-Israel segment of our society, represented by a coalition of Islamists, internationalists, and left-wing academics. These anti-Israel groups are a small segment of American society but are growing internationally. Given Time’s shrinking circulation, cornering the market on even a small segment of the population can only help.
————————————————————–
UPDATE: Just spotted this. Time got the award for Worst Caption in the Dishonest Reporting ‘Award’ 2008 competition, for the “the most skewed and biased coverage of the Mideast conflict.”