Stimulus Plan To Save The Ultimate Bridge To Nowhere

Stimulus Plan To Save The Ultimate Bridge To Nowhere 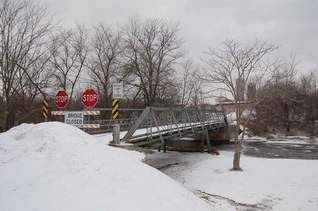 I wish this were a joke, but it’s not. The town of Dryden, NY, near Ithaca, has plans to build a bridge in an area so remote that the town does not want to spend its own money on it, so it is seeking federal “stimulus” funds. Nothing surprising yet. Much of the stimulus package gives federal money for local problems on which locals don’t want to spend their own money.

But there is a twist here. This remote river crossing currently is occupied by a 121-year old steel bridge, which even if renovated, cannot be used for modern vehicles. Since the existing bridge is historic, the town must move the old bridge someplace else if it is to get the federal funds — but it hasn’t yet found a place to put the old bridge. As reported in the Ithaca Journal:

The Red Mill Road bridge, which spans Fall Creek near Freeville, has been the subject of much debate since its closure to vehicular traffic 10 years ago. The 120-foot-long structure is a narrow one-lane bridge built in 1887, one of only a few remaining examples of its kind made by the nearby Groton Bridge Company.

But it was not designed to handle modern traffic or road maintenance, and when salt came into use it really took a toll on the bridge, according to town environmental planner Dan Kwasnowski.

The bridge became corroded and fell into disrepair – so much so that it was further closed to pedestrian traffic in 2005, and has been lying unused while the town and county, which owns it, consult on what to do…

At the urging of the State Historic Preservation Office, county officials considered rehabilitating the existing Red Mill Road bridge for use as a pedestrian crossing, and either building a new bridge alongside it or further down the creek. They even got provisional state funding for the project in 1999, said John Lampman, a county highway engineer.

But the plan failed to get local backing, as many thought the remote countryside location did not get enough pedestrian traffic to warrant two bridges, and the project was put on hold in 2002.

More recently, it made the state’s Transportation Improvement Program list and went through extensive federal and state design processes but failed to get approval during the last round of consideration.

Proponents of the project have now been given renewed hope as the bridge has made it on to the “first list” of projects submitted to county officials by the Ithaca-Tompkins County Transportation Council to receive federal stimulus package funding. Because it has already gone through much of the federal design process, the project is in a unique position to be “shovel-ready” within months, Kwasnowski said….

One of the stumbling blocks could be deciding what to do with the old bridge. Lampman said the State Historic Preservation Office has stipulated that the county identify a site where the old bridge could be displayed before work begins on the new bridge. And the current $1.1 million proposal does not include money to move the bridge and rehabilitate it elsewhere, so there may be further funding issues depending on how it is ultimately used and by whom.

The historical society would like to see the bridge re-used in some way, possibly along a pedestrian trail or in a park. It would not necessarily have to span water, or anything at all, Kwasnowski said – it could be plopped in a playground or on someone’s personal property, as long as it is visible to the public.

Anybody want a bridge so that Dryden can get its federal money? They’ll plop it on your property for free.

Wait, I have an idea. How about plopping the bridge down on the lawn of the White House, as a monument to wasteful government spending.