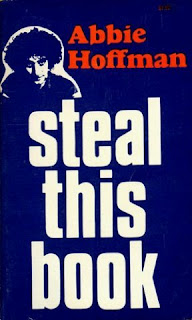 As an early teen, I was fascinated with Abbie Hoffman’s “Steal This Book.” The book, by the 60’s radical Yippie, was a guide to using the capitalist system to destroy the capitalist system. Hoffman gave advice on how to cheat various institutions, such as the post office (e.g., mail an envelope to yourself without a stamp, with the return address of the person you want it to go to, and the post office will send it “back” to the returnee for free) all with the goal of disrupting civil society. For someone growing up in a nice suburb, this was mind-blowing stuff.

The introduction to Steal This Book lays out the philosophy of how to destroy the system from within by attacking those who benefit from capitalism (the “rich”) to give to all others by creating chaos:

Steal This Book is, in a way, a manual of survival in the prison that is Amerika. It preaches jailbreak. It shows you where exactly how to place the dynamite that will destroy the walls. The first section-SURVIVE!-lays out a potential action program for our new Nation. The chapter headings spell out the demands for a free society. A community where the technology produces goods and services for whoever needs them, come who may. It calls on the Robin Hoods of Santa Barbara Forest to steal from the robber barons who own the castles of capitalism. It implies that the reader already is “ideologically set,” in that he understands corporate feudalism as the only robbery worthy of being called “crime,” for it is committed against the people as a whole. Whether the ways it describes to rip-off shit are legal or illegal is irrelevant. The dictionary of law is written by the bosses of order. Our moral dictionary says no heisting from each other. To steal from a brother or sister is evil. To not steal from the institutions that are the pillars of the Pig Empire is equally immoral.

Community within our Nation, chaos in theirs; that is the message of SURVIVE!

Call me paranoid, delusional, correct, prophetic, whatever, but I’m beginning to feel that someone at 1600 Pennsylvania Avenue has read Steal This Book.

There seems to be a deliberateness to the chaos, a purpose to the ever-increasing exclamation points, as in crisis (!), catastrophe (!!), act now or else (!!!), … we’re on the verge of (!!!!). An attempt to keep so many parts moving so quickly that by the time we realize what has happened, we will have an economic and political system based on punishing achievement in the name of fairness, redistributing goods and services in the name of equality, and above all, dependence on a government which controls everything by endlessly proclaiming that only it has good intentions.

I’ll leave it to others to detail the deviousness of the “stimulus” plans being offered up, which hide fundamental changes to the health care system in their hundreds of pages, as well as the executive orders and other actions to alter the landscape while you were caught up worrying about “stimulus.”

For now, I’ll just go on record that I’m not buying what this administration is selling, because I’ve already read the book.

A trillion dollars… I just cannot get my mind around the enormity of that much corruption.

“we will have an economic and political system based on punishing achievement in the name of fairness, redistributing goods and services in the name of equality, and above all, dependence on a government which controls everything by endlessly proclaiming that only it has good intentions.” Obama said as much in his inaugural speech. I don’t think he or his people have the ability to pull it off, but the amount of damage they can inflict is tremendous. Just look at this “stimulus” bill…