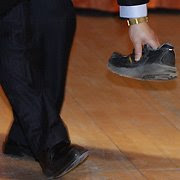 A protestor in Cambridge, England, threw his shoe at Chinese Premier Wen Jiabao today, missing by a few feet. The photo at right (Darren Staples/AP) shows the shoe being picked up by a security guard.

The video, although not as dramatic as the Bush-Iraq shoe throw event, is here. As reported by Times Online:

Mr Wen was coming to the last part of his address when a young Western-looking man with dark hair stood up, blew a whistle and shouted: “How can the university prostitute itself with this dictator? How can you listen to these lies?”

The man, who appeared to be in his early twenties, then took off
his heavy shoe and threw it at the stage missing the Premier by a few
feet.

According to reports, unlike George Bush who cracked a joke following a similar incident, “Wen was not nearly as amused.” The Bush shoe thrower was lionized by the Western and Arab media. The Wen Jiabo show thrower likely will be thrown to the lions.
————————————————————-
UPDATE: More video and links at Gateway Pundit.