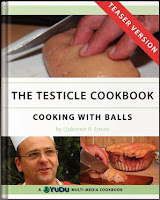 The internet is abuzz with photos of Pork Brains In Milk Gravy, allegedly the “worst food product ever.” I beg to differ with these pundits, who obviously have not heard of The Testicle Cookbook: Cooking With Balls, by Serbian chef Ljubomir R. Erovic, who dedicates the book:

To my parents and my grandmother Ruza Macic for introducing me to the delicious world of testicles, even if they did lie about it!

You can order your e-copy here, and listen to words of wisdom from the chef. According to one review, Chef Erovic has tasty recipes for more than 30 dishes, including “a rustic testicle pizza to a more refined dish of testicles with béchamel sauce.”

The Telegraph newspaper in Britain has hailed the book as “the world’s first recipe collection of its kind.” I’ll bet.

Erovic also organises the World Testicle Cooking Championship held annually in Serbia since 2004. It draws in chefs from Australia, Bosnia-Herzegovina, Finland, Greece, Hungary, Norway and Serbia. One metric tonne of testicles are prepared during the contest.

Pork Brains in Milk Gravy is one of the classic acquisitions of the Museum of Depressionist Art. It is a question though, at least in the male, whether the brains or the testicles are in control. Surely poor Many Warhole never knew.