Posted by William A. Jacobson Thursday, February 26, 2009 at 10:13am 0 Comments
More Sharing Options

An article at American Thinker lays out a chart showing how Obama won the election by overwhelming Republicans. The author compares Republicans to Ethiopian spear-carriers who, under an onslaught by Italian mechanized troops, didn’t know what hit them. I like the analogy, but I don’t like the chart: 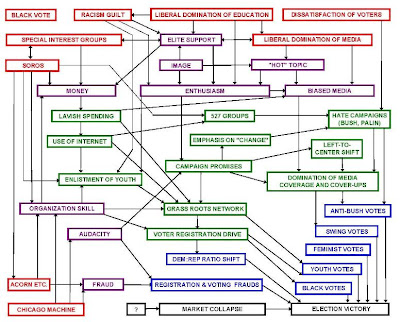 I have my own chart, and it is easier to follow. In fact, it’s not even a chart, just a formula:

(A) Mainstream media adoration of Obama and demonization of Republicans;

(B) Use of race as a political weapon both to inspire supporters and silence critics;

(C) Creating a climate of fear while selling hope;

This is the same formula used to ram through the “stimulus” package. Witness the mainstream media’s continued cheerleading of Obama and demonization of Republicans (such as Bobby Jindal), together with the use of the race card by Eric Holder and James Clyburn to silence debate over Obama’s policies.

This is a formula that works, so expect more of it as Obama seeks to nationalize education and health care to create a government-dependent generation which will vote Democratic because the alternative would be unthinkable: Working for a living and living within one’s means.