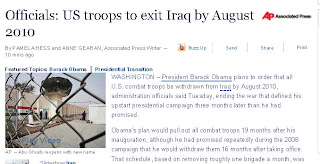 Nothing has changed. The mainstream media still is campaigning for Obama. On Obama’s announcement of troop withdrawals from Iraq, the AP headline screams “US troops to exit Iraq by August 2010.” Read several paragraphs into the story, and you will see that the headline and opening paragraphs lie. Obama plans on keeping 30,000-50,000 troops in Iraq beyond August 2010. The troops which will be withdrawn are “combat” troops, which is a false distinction.

All troops will not be withdrawn until the end of 2011, the date already agreed upon by the Bush administration and the Iraqi government:

The withdrawal plan — an announcement could come as early as this week — calls for leaving a large contingent of troops behind, between 30,000 and 50,000 troops, to advise and train Iraqi security forces and to protect U.S. interests.

Also staying beyond the 19 months would be intelligence and surveillance specialists and their equipment, including unmanned aircraft, according to two administration officials who spoke on condition of anonymity because the plan has not been made public.

The complete withdrawal of American forces will take place by December 2011, the period by which the U.S. agreed with Iraq to remove all troops. 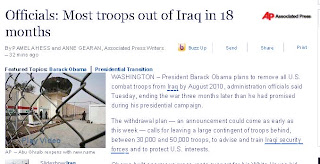 UPDATE: AP has changed the headline to “Officials: Most troops out of Iraq in 18 months” and has moved into the second paragraph the disclosure that 30,000-50,000 troops will stay in Iraq. But since AP is so widely distributed and used by other sources, the original headline and story will linger.