Will The Fate Of The Constitution Turn On An 8×10″ Framed Certificate?

Will The Fate Of The Constitution Turn On An 8×10″ Framed Certificate? 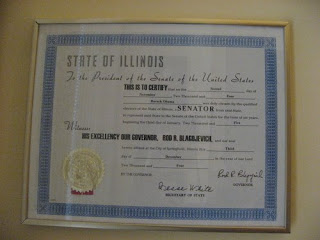 Note: See Related Posts Harry Reid Is Wrong — There Has Been A Senate Appointment Without A Secretary Of State Certification and The Burris-Murkowski Double Standard.
——————————————
Harry Reid, U.S. Senate Majority Leader, needlessly has created a potential constitutional crisis over the seating of Roland Burris, the lawful appointee of Illinois Gov. Rod Blagojevich to Barack Obama’s open Senate seat. Reid, out of sheer ego, insists that he will refuse to seat Burris because Illinois Secretary of State Jesse White refuses to sign a certification, in a form recommended but not required by Senate Rule 2.
After the Illinois Supreme Court ruled that no such certification was required in order for Burris to be deemed the lawful appointee, Reid (and his sidekick, Illinois Senator Richard “Dick” Durbin) refused to relent, insisting the Burris will not be seated without a Rule 2 certificate.
Now, Illinois Secretary of State Jesse White, who refused to sign a Rule 2 certification precipitating the Illinois Supreme Court lawsuit, has signed a non-Rule 2 certification, posted on the blog site of Chicago Sun-Times columnist Lynn Sweet. While the certificate is somewhat hard to read in the photo, reports indicate the certificate acknowledges that Blagojevich’s letter appointing Burris is on file with the Secretary of State and is “true and accurate.”

Burris is considering a federal lawsuit if Reid continues to refuse to seat Burris. This will present an interesting constitutional question as to the power of the Senate to refuse to seat lawfully appointed Senators who otherwise meet the constitutional qualifications. On the one hand, Reid and a small number of law professors argue that Senate power over seating members is unlimited and not subject to judicial review. Many others (including me) argue that the Senate power is limited to the issue of whether a Senator meets the constitutional qualifications; otherwise, appointments and elections become merely advisory subject to the whim of the majority party.

This has all the makings of a true constitutional crisis, at a time when a single vote in the Senate may decide the fate of important legislation. Politically, I’m happy to have one less Democrat in the Senate; constitutionally, I think Harry Reid should not create a needless crisis over a legally meaningless piece of paper.

The document on Lynn Sweet’s blog appears to be the certificate for Barack Obama’s election to the Senate in 2004, signed by Blagojevich and White, which she posted for comparison purposes (to show what a typical Rule 2 certificate looks like). It would be interesting to see a copy of the document that White signed yesterday. If it has been described correctly, it would almost (but not literally) comply with Senate Rule 2.

Why hasn’t Jesse White posted the document he signed on his website? After making such a big show over his refusal to sign, doesn’t he owe it to the nation to release the document promptly?

———————————————————————————-
Update 1-11-2009, 8:40 a.m.: Here is a copy of the document issued by Jesse White. (h/t CapitolFax Blog) It simply is a certification of a state record, namely the certificate issued by Blagojevich appointing Burris. The document is not in the form recommended by Senate Rule 2, so the document does not satisfy the demands of Harry Reid and Dick Durbin, unless they choose to change their demands to save political face.

“Each House shall be the Judge of the Elections, Returns and Qualifications of its own
Members,….”

Where do the courts garner their authority to intervene in decisions of whether or not to seat a senator appointee, or even an elected person as senator?

In this instance, the Senate would not be passing on the “elections, returns and qualitifications” of its own members. The Senate would be requiring an extra-constitutional requirement, a particular form of certificate signed by a state Secretary of State notwithstanding contrary state law. As to Court authority, if a court were to find that the Senate were acting outside the scope the language you quore, then Senate action would be subject to court review just like any other allegedly unconstitutional conduct by government.

There are good arguments for and against court jurisdiction over seating of members of the Senate.

For the sake of argument, lets assume the courts DO have jurisdiction and agree with Burris. Now what?

There is effectively no way to force the Senate to seat him. Yes, the capitol police can refuse to eject him from the chamber anymore, but how would you make the Senate acknowledge him as a member, let him speak or count his votes?

That said, I believe he will be seated shortly as the political fallout to the Democrats in 2010 from refusing to seat the only black member of that body is something they don’t wish to deal with. They’ll accept the certification and thereafter refuse to acknowledge there was ever an issue.

I have a question, does this ever become an issue of states rights? I mean, does the federal body have the right to refuse a representative legally chosen for any state?

And if Reid is successful, does that have more serious implications of the federal government’s control over state issues?

I’m not sure why anyone is *shocked, shocked* that the Senate would consider refusing to seat someone for extraconstitutional reasons. I *am* shocked that, in all this discussion, the Smoot hearings have never come up yet.

As to states’ rights, not sure what implications Reid’s actions would have if successful. His hook on this is the Senate Rule and the language in the Constitution as to the Senate judging its members. Doesn’t seem that would get him very far beyond running the Senate however he pleases.

The very concept of Judicial Review is extra-constitutional. Does Senator Reid want to open that can of worms?

I, for one, rejoice in the fact that the Republican Culture of Corruption, featuring the likes of Duke Cunningham, and Ted Stevens, has been swept away and replaced with such squeaky clean figures as Dodd, Reid, Frank, Pelosi, Murtha, Rangle, Blago, Franken, Burris, et. al. I mean, under the Republican regime, things were really going haywire or something.
What a difference Hope, Change, and a strong commitment to ethics can make.

Do not misread the word “election” as a vote of the people. Originally the constitution had senators “chosen by the legislature”, with no restrictions on the method any particular state. (Congress passed a law in the antibellum period which set rules for the legislatures, which implies Congress has the right to control the method as they see fit, as long as it plausibly meets the dictates of the Constitution). The intent of the “Judge of the Elections, Returns…” phrase would seem to grant each House the right to reject a candidate due to any issue with the process of his appointment-whether it be a dispute in the state legislature in the early 1800s, a dispute over who is legally the governor of a state, a dispute over the ballots in an election today, or a dispute over whether the appointing official engaged in a felony while vetting the candidates.

I think the issue will be avoided. All that has to happen is for Burris to not be sworn in before Blago is impeached and removed from office.

The court doesn’t have to rule him ineligible — they just have to keep the ball in the air until they can rule the issue moot.