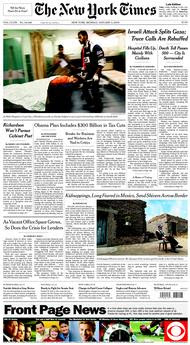 The New York Times has run an advertisement on its front page for the first time ever. What a precious moment, made all the more poignant by the fact that the ad was from CBS television.

So the dying NY Times breaks with tradition to run an ad by the dying CBS. Is there any better example of mainstream media inertia? There are so many possibilities to haul out all the old cliches:

Any other cliches that would fit the bill?

How about “Misery loves company”?