It’s Time To Speak Out Against The “Mormon Boycott”

It’s Time To Speak Out Against The “Mormon Boycott”

Posted by William A. Jacobson Thursday, December 4, 2008 at 12:28am 1 Comment
More Sharing Options 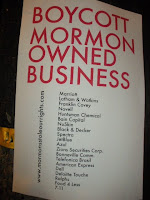 See my article, It’s Time To Speak Out Against The “Mormon Boycott”, at American Thinker. Read the article, and the documentation of the growing movement to boycott Mormon stores, businesses, and to subject individual Mormons to harassment.

Whether there is a constitutional right to change the traditional definition of marriage, or whether that issue is merely political subject to electoral vote, is something the courts and the major political parties themselves have not agreed on. To single out Mormons and subject Mormons to an economic boycott is unjustifiable.

What is so troubling about the boycott of Mormon-owned businesses is the sad history of economic boycotts directed at religious minorities. The proponents of the “Mormon boycott” would do well to study history.

In 1933, the Nazis launched a boycott of Jewish businesses as the first step towards the eventual extermination of Jews, homosexuals, and others. The pretext for the boycott was that alleged propaganda spread by Jews funded by Jewish money had damaged Germany. The boycott was “retaliation.”

Read my article at American Thinker and you will see the level of vitriol aimed at Mormons. The language and justifications for the German boycott (boycott Jewish businesses because Jews have been spreading propaganda against Germans, Jewish money is a threat, and Jews have obtained too much power) are eerily similar to the justifications for the boycott directed at Mormons (boycott Mormon businesses because Mormons have been spreading propaganda against gays, Mormon money is a threat, and Mormons have obtained too much power).

As related on the website of the United States Holocaust Memorial Museum:

On April 1, 1933, the Nazis carried out the first nationwide, planned action against Jews: a boycott targeting Jewish businesses and professionals. The boycott was both a reprisal and an act of revenge against Gruelpropaganda (atrocity stories) that German and foreign Jews, assisted by foreign journalists, were allegedly circulating in the international press to damage Nazi Germany’s reputation.

On the day of the boycott, Storm Troopers (Sturmabteilung; SA) stood menacingly in front of Jewish-owned department stores and retail establishments, and the offices of professionals such as doctors and lawyers. The Star of David was painted in yellow and black across thousands of doors and windows, with accompanying antisemitic slogans. Signs were posted saying “Don’t Buy from Jews” and “The Jews Are Our Misfortune.”

The photos below, of the 1933 boycott of Jewish businesses in Germany, are courtesy of the United States Holocaust Memorial Museum: 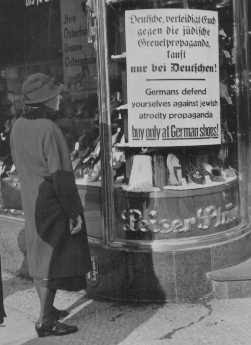 Sign on a Jewish-owned store during the boycott. Berlin, Germany, April 1, 1933 (“Germans defend yourselves against jewish atrocity propaganda. Buy only at German shops!”). 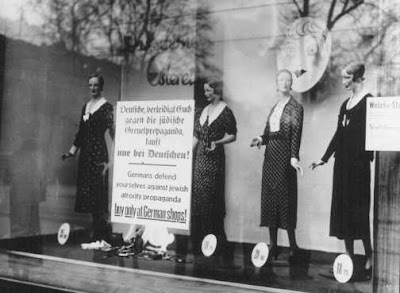 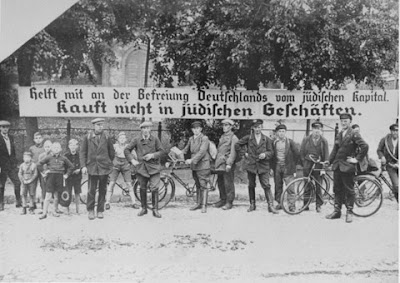 In the end, these proponents (be it Atheist, Gays, are what have you) are only trying to gain attention to themselves. Can you imagine them whipping out the same campaign in opposition to Muslims? I really don’t like the way Mormons, Jews, Christians, etc. are such an easy target. If you preach tolerance and understanding you should practise it.

BTW … thanks for stopping by my blog. Merry Christmas!!!