Posted by Leslie Eastman on May 17, 2019 33 Comments
Earlier this year, we reported that the US Department of Transportation (DOT) cancelled millions in grants for the high speed rail project that California Governor Gavin Newsom has substantially scaled back. Newsom has tried fighting this move, arguing that California needed these funds to complete a more limited-scale project than the Los Angeles to San Francisco route originally planned. However, the Trump administration did not buy the argument, so it has officially ended the Obama-era agreement.
Read More 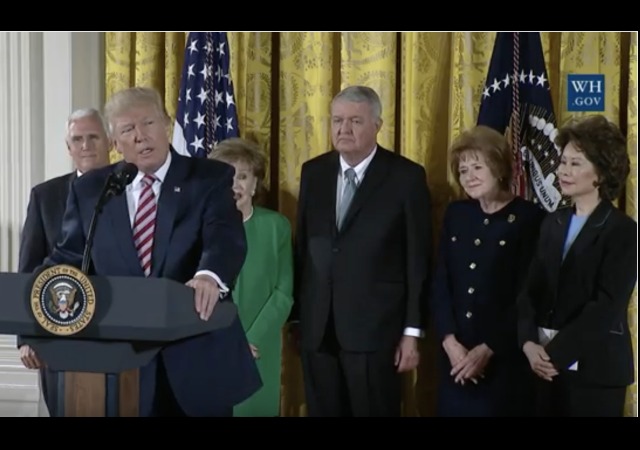 "We live in a modern age, but our air traffic control system is stuck, painfully, in the past," he said at a White House event attended by current and former transportation department officials. "Americans can look forward to cheaper, faster and safer travel."

Posted by Mike LaChance on June 04, 2017 12 Comments
Obamacare repeal and tax reform seem to be in political limbo for the moment. In the meantime, Trump is moving forward with his plan to improve infrastructure. John Wagner reports at the Washington Post:
Read More

Posted by Leslie Eastman on March 04, 2017 68 Comments
The last time we checked in on the construction of California Governor Jerry Brown's legacy project, the high speed train connecting Los Angeles to San Fransisco, it was already already $3.6 billion over budget and seven years behind schedule. In that piece, I a surmised that federal funding to help complete this project could be axed, as several pricey grants were sitting on the desks of administrators now working for President Trump (who has been defied and mocked by numerous California politicos, including our governor). Sure enough, the Secretary of Transportation has halted the transfer of millions of dollars in funding for the bullet train:
Read More
DONATE