Posted by Mary Chastain on October 01, 2018 22 Comments
NAFTA is now called the U.S.-Mexico-Canada Agreement, or USMCA, after the three countries reached a new deal late Sunday night. From The Wall Street Journal:

The biggest impact is expected to be on the region’s largest industry, autos, requiring a greater portion of vehicles to be made in North America and with high-wage labor in the U.S. and Canada. The new deal for the first time sets rules for financial-services and digital businesses that have emerged since the bloc was created, aimed at pleasing sectors from drugmakers to Wall Street. 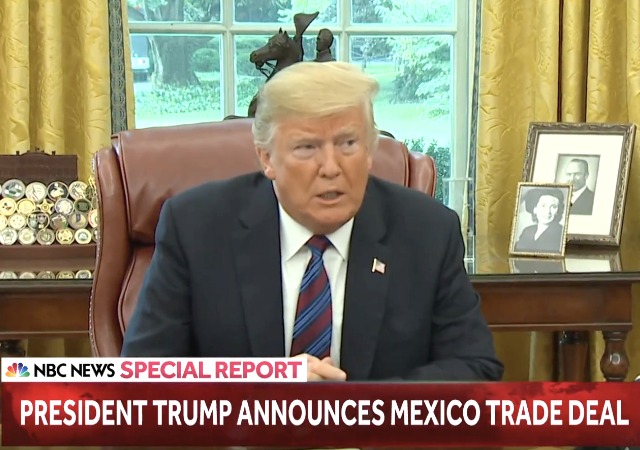 Posted by Mary Chastain on August 27, 2018 18 Comments
President Donald Trump announced America has entered a "United States-Mexico Trade Agreement" from the White House, dumping the name NAFTA due to bad connotations. Trump hopes to start negotiations with Canada ASAP. He said "we'll see" if Canada will join this agreement or have a separate agreement.
Read More

Posted by Mary Chastain on May 18, 2017 3 Comments
President Donald Trump has officially alerted Congress that he will begin NAFTA renegotiation talks. This gives Trump's administration, Congress, and businesses a 90 day consultation period before he sits down with Canada and Mexico. From Fox Business:

"Today, President Trump is fulfilling one of his key promises to the American people," U.S. Trade Representative Robert Lighthizer told reporters on Thursday. In a letter to congressional leaders, Mr. Lighthizer said the administration will start talks with Canada and Mexico as soon as 90 days from Thursday, in line with congressional rules on negotiating trade deals subject to expedited consideration by lawmakers.