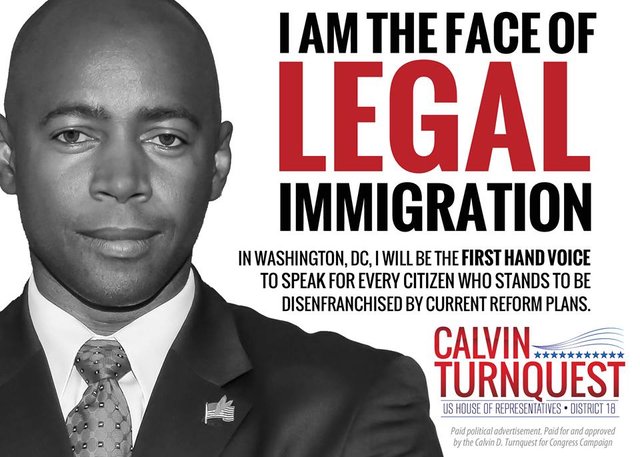 Posted by RedDawn on July 02, 2014 13 Comments
Florida's 18th Congressional District has an interesting contender: Calvin Turnquest. Born in Nassau, Bahamas, Turnquest cites one of his proudest moments as taking the oath to become a United States citizen. A citizen by choice. Having been through the tedious American immigration system, starting as an international college student at the University of Miami, Turnquest hopes to be the GOP's new face of legal immigration. Turnquest, hoping to represent Floridians in Allen West's old district, has lived and worked in the district for 15 years. During that time, he and his wife (a practicing physician) have owned small businesses and Turnquest served as a Councilman and Vice Mayor for the Village of Tequesta. "Those of us who have been through the process feel disenfranchised by those who get to jump in front of the line," Turnquest said in an interview with me. A sentiment held by many who have been through the American immigration ringer. He hopes that in being able to share his story of working hard to achieve the American dream, other immigrants will be emboldened to choose citizenship legally. Believing Republicans too often and too easily concede to Democrats when it comes to immigration reform, Turnquest said, "Pandering is a bad move, we're handing this country and the votes to the Democrats." He went on to say, "I'm so tired of hearing Republicans say, "let's take a page from the Democrat's playbook," that's ridiculous! We need to be changing the conversation and driving the narrative." "Experience the American dream like I have. Go to the back of the line, pay the fees, pay your taxes and then you'll be welcome with open arms," Turnquest proposed. He also indicated that there reasons we have certain immigration regulations in place, like protecting American citizens. "When I went through the process, I had to present the U.S. Embassy with a certificate of health. One problem I see with illegal immigration; we don't know who's been vaccinated for what," he mentioned.
Read More
DONATE