Important centers of learning and culture of morphed into circuses and drug dens. 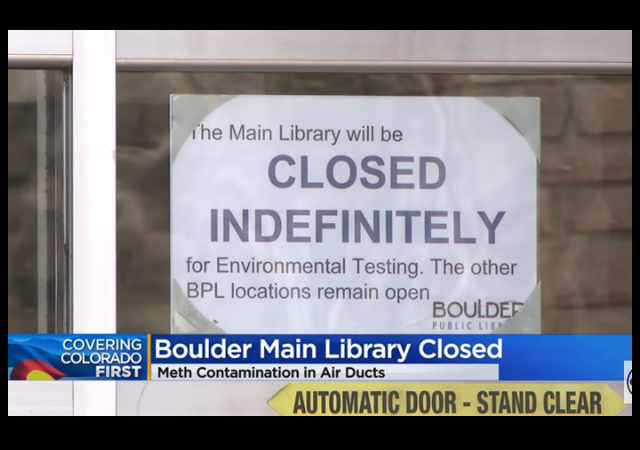 What is going on in Colorado?

It used to be when you went to a public library, all you had to worry about was being forced to endure Drag Queen Story hour.

But now, Centennial State is giving the remaining library patrons something new to worry about. Two Colorado libraries recently closed to deal with the facilities being contaminated with methamphetamine.

The public library in Englewood, about seven miles south of downtown Denver, was closed last week, shortly after test results showed that its bathrooms, as well as some other surfaces, were contaminated with the drug, city officials said.

Out of an “abundance of caution,” the city, which has a population of about 33,500, said it had decided to temporarily shutter the Englewood Public Library as well as a lobby and some restrooms in the nearby Englewood Civic Center, citing contamination.

Shawn Lewis, the city manager, said in a statement that the test results were “troubling.” He said the city would immediately begin work to remediate the affected areas of the library, with the goal of reopening as soon as possible.

“The health and safety of our staff, residents and patrons is of the utmost importance to all of us at the City of Englewood,” he said.

This development is coming hard on the heels of an Axios report indicating Boulder’s civic leaders are scrambling to address rising methamphetamine use in the area, which has spiked over the past 6 years and now is impacting public places, including its library.

The latest: A downtown Boulder transit station on Tuesday was forced to temporarily close its bathrooms and adjacent hallway after traces of meth were found.

What they’re saying: “No public restrooms will be available for a few weeks until a new system is in place where library staff and contract security staff can help monitor the bathrooms and deter unwanted behavior,” the city said in a statement

The clean-up will likely take some time to ensure full compliance with Colorado law.

Regardless of how unclear the science is on the risk of second-hand meth exposure to the public, robust cleanup is absolutely necessary under Colorado law.

The regulations state that meth limits may not exceed 0.1 microgram. If a property owner finds that test results show that amount or higher, they must undergo decontamination efforts.

The other option is to undergo “a full clearance sampling protocol” — essentially, more testing.

…There are specialized meth contamination cleanup specialists throughout the country. Each state, including Colorado, collects its own lists of these contractors who can take on this work.

So far, Englewood said the remediation work will include getting rid of any contaminated surfaces, walls, HVAC ducts and exhaust fan equipment.

Sadly, it seems important centers of learning and culture of morphed into circuses and drug dens.

Colorado is a beautiful state. Cities keep their streets amazingly clean. I wonder where all the meth addicts go to shoot up.

If public libraries wish to continue to exist they are going to have to do much better than they have lately. Let’s face it the need for public libraries is definitely on the wane since the main purpose of public libraries, allowing students to study and do research, can actually be done from the safety of the home on the internet. Making the library an unsafe place to be physically and as a propaganda center that advocates against a majority of people’s beliefs is destructive behavior.

The access to certain databases/research networks via library portals has value, but use some gloves and a mask if you dare to check anything out.

My library removed the doors of men’s room stalls. I thought it was to discourage gay sex. But maybe not

Most of those databases are located in private libraries and not available to the general public. Most public libraries are little more than school libraries adults can use and 99.99% of the information is available online. Libraries rely on goodwill from the citizenry and are wasting that goodwill with things like drag queen story hours. How long will the public be willing to pay the taxes to support libraries when the libraries have become another leftist organization?

There is also the issue of “street people” and “the homeless” who – by court rulings – can use library restrooms as places to clean up (or shoot up); the library computers are now used to view pornography because of “rights” pulled out of thin air.

I long for the times of “Hey You. Haul your ass!” meaning something, and that was that. Now, rights are pulled out of thin air.

Bingo. Saw this trend years ago with our public library – it became a hangout and a de facto warming shelter for all the homeless in our city.

Sad to see the libraries abandoning their primary mission.

Seriously libraries are becoming dangerous places to send minor children to alone. As a kid I would ride the bus to go to the library so I could read the out of town newspapers (can now do online) and do research for school projects ( almost all of the information is now available online). Now there is no need to step into a library for just about anyone. Libraries are surviving on the goodwill of older generations but they are burning that goodwill at a very rapid pace. They have become politicized and unsafe and that does not bode well for their future.

I hadn’t been to our main downtown city branch in a few years. Wandered in last summer, mid-day weekday and library-quiet, but mostly because there were only 3-4 other actual patrons in there rather than 20-30.

The remaining staff librarians were pleasant enough, but the friendliest & most-engaging person was the armed security guard.

Not likely to return – our suburban branches (+my electronic tablet) meet my needs without extra “complications”.

Public Libraries are a perfect example of how bureaucracies, once established, never go away. Like living organisms, they have a fierce survival instinct.

“Our work here is done. Let’s shut down and eliminate our cushy jobs.” Said no bureaucrat ever.

I can’t imagine what the NY Public Library must be like. Must be a Superfund site. I’d recommend only using the digital collection.

The NYC Public Library must receive substantial state support, because of my success accessing their digital catalog as a Central N.Y. resident if providing documentation of residence.

It’s been much more extensive than our local & county system.

And, as previously noted, DON’T have to get any closer to the city’s cultural “complications”.

Actually not. I regularly visit several branches of the Brooklyn Public Library, and also occasionally visit the central branch of the NYPL (the one with the lions out front), and have never seen a problem.

And yes, I regularly use the euphemism at my local library branch. Never had a problem there either.

The only recent change is that they used to have one for men and one for women. Rather than deal with the morass that has become, they just took off the signs and opened them both to everyone. I imagine the women don’t like it, because men’s rooms tend to be not as clean as women’s rooms, but what do I know?

Colorado USED to be a great state to live in, but once their officials became woke it all changed. When they made MJ legal it drew the meth addicts and other drug abusers there in droves. Now the results are showing. So sad for once a great state. As California went so did Colorado.

A librarian’s first duty is to protect the library, its books, and the people who come there to read them. These librarians failed at that duty because they were instead misusing their job as an expression of their personal liberal virtues. They should be fired.

Andrew Carnegie must be rolling over in his grave. His beautiful libraries have become drug dens, flop houses, and gay bagnios.

In our town, the library building is one of the very few sites whose restroom facilities are “formally” open to the general public. The other is the community center (but it’s not open when not in use) and the police station (you’d have to be really tweaking to choose that one). If we had a “homeless problem” (which thankfully we don’t), I’d expect our library loo to have the same issues. Boulder is fluorescent blue, so I imagine they have all this in spades.