The committee didn’t provide details, but it received two complaints against AOC over her appearance at the Met Gala in 2021. 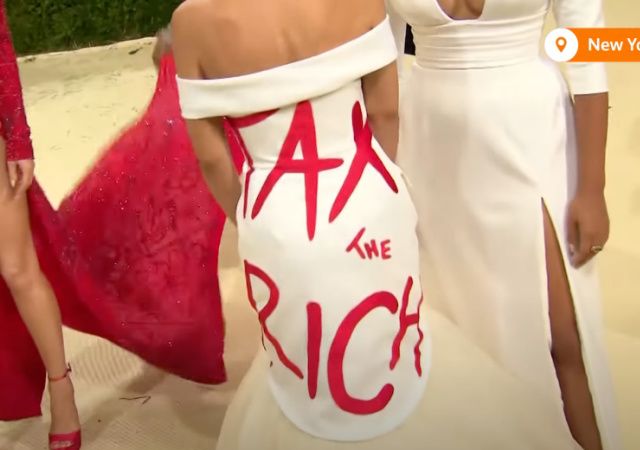 The House Committee on Ethics announced it is investigating Rep. Alexandria Ocasio-Cortez (D-NY).

The press release did not provide details:

Pursuant to House Rule XI, clause 3(b)(8)(A), and Committee Rules 17A(b)(1)(A), 17A(c)(1), and 17A(j), the Acting Chairwoman and Acting Ranking Member of the Committee on Ethics have jointly decided to extend the matter regarding Representative Alexandria Ocasio-Cortez, which was transmitted to the Committee by the Office of Congressional Ethics on June 23, 2022.

The Committee notes that the mere fact of a referral or an extension, and the mandatory disclosure of such an extension and the name of the subject of the matter, does not itself indicate that any violation has occurred, or reflect any judgment on behalf of the Committee.

The Committee will announce its course of action in this matter following its organizational meeting and adoption of Committee Rules in the 118th Congress.

The Office of Congressional Ethics received two complaints against AOC over her appearance at the Met Gala in 2021. She wore that Tax the Rich dress as she mingled with…the rich.

Lawmakers can accept “free tickets to charity events directly from the organizers.

Conservative groups allege, however, that such an allowance does not apply to the Met Gala, since invitations are controlled by a for-profit company — media conglomerate Conde Nast — and the tables at the event are similarly sponsored by corporate entities.

The American Accountability Foundation — the organization behind the initial ethics complaint filed against the congresswoman — claimed that Instagram “was able to purchase access to Representative Ocasio-Cortez that is unavailable to average citizens” by sponsoring a table at the gala.

The second ethics complaint, filed by the National Legal and Policy Center, alleged that the borrowed white Brother Vellies gown worn by AOC — which featured the alleged “Tax The Rich” in red lettering on the back — constituted an impermissible gift because it was “directly related to AOC’s ‘position with the House’ as a highly visible and controversial Member.”

Ocasio-Cortez subscribes to the Pro-Choice ethical religion. The House is changing.

She needs a spanking. LOL. Actually I thought the dress was a hoot.

Really? She’s a scummy communist but LOVES $$$$$ but she will step on your back to get her picture taken , she is so fake, is there anything real about this Trollope?,

I despise her. She is the worst of the worst

I’m guessing you just want to date her…

I have a sense of humor when it comes to AOC. She gets in so much trouble that it makes Republicans look good by comparison. She’s a gift that keeps giving. Tax the rich at a gala ball is priceless irony. Photo op of her at the border crying at an empty parking lot is a classic meme. Saying her critics want to date her is fantastic fantasy.

The dress made her look like the victim in a slasher flick.

Well, spanking is kinda like dating to progressives, isn’t it?

It would have to be a long distance romance because
I don’t like DC or NYC.

AOCs front side (not shown above) may be the reason Nancy had recent enhancements. Or Nancy suffers from “inflation” caused by reckless Democrat spending.

I’d volunteer to do the spanking!🤣

She’s probably going to get a slap on the wrist instead.

Not to mention them giving her a very expensive designer dress to wear there.

If San Fran Nan doesn’t let it slide and it is handled before January, Occasional-Cortex walks.

If San Fran Nan lets it slide till January, then the Vichy Republicans will let her walk.

That dress looks like a giant Chick Fil a bag.

Yeah, but thing inside is not a chic.

More like one of the cows in the Chik-fil-a commercials….

You better ask first before you take her. She’s a gun girl. It might become dangerous.

I’ll feel safe around her.

Q: What are AOC’s pronouns?

Congressional ethics is an oxymoron.

How can they investigate O’Crazio-no-Cortex’ ethics, when she has NONE !!!

Corrupt politicans are a dime a dozen, but immature assistant bartenders thrust into Congress? – What does anyone expect.