It’s all the Republican’s fault or something. *eye roll* 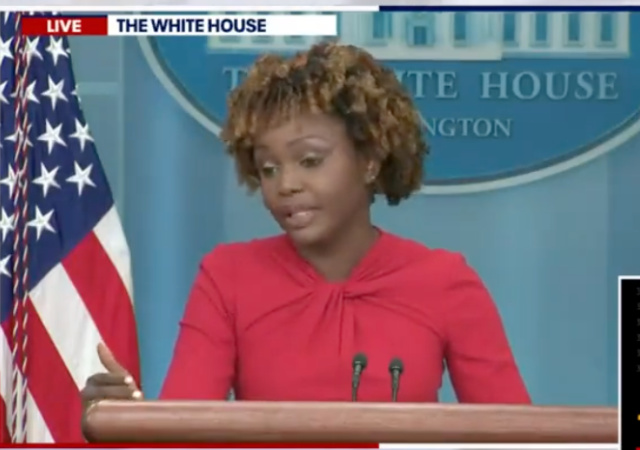 What a shock. President Joe Biden flies to Arizona on Tuesday to tour a Taiwan Semiconductor plant in Phoenix.

Press Secretary Karine Jean-Pierre confirmed the president would not make a trip to the border during his visit:

JEAN-PIERRE: “So, look, we are committed to continuing to secure our borders while maintaining safe, orderly, and humane process- — processing of migrants. That is something that we are committed to under this administration. This will remain the case with Title 42 — when Title 42 is lifted. Any suggestions that we might be changing a policy or looking at a different policy is inaccurate at this time. I know there’s been conversations about that. We haven’t made any — no such decisions have been made yet. But, again, we are committed to securing our border.”

FBN's @EdwardLawrence: "In Arizona…[Biden]'s going to that chips factory, any plans…to go to the border and see the situation for himself there?"

JACQUI TIME: "If the President is not going to make time to visit the border during his trip…to a border state, will he do it in the new year?"

.@JacquiHeinrich: "The trip is obviously to Phoenix…not to Georgia, which is sort of a pressing issue for Democrats…Have Democrats determined that a visit…would not help Senator Warnock's reelection bid?"

Then what about Kamala, the border czarina?

None of them want to confront the problem and the BP that has to work with it.

Less of a czarina, more of a concertina.

If that song applied to Biden’s sanity, it would be an oldie but goodie.

You don’t want to go down there, Joe.
It’s DANGEROUS down there.
Thanks, by the way.

Why would he visit our border? You can’t visit a place that doesn’t exist. Borders only exist in Ukraine.

He won’t recognize his grandchild either. What a compassionate soul.

Biden has plenty of time to go to Delaware yet cannot make time to visit the border of his own country? What the hell is he afraid of? Who is preventing him from going? Does he think that by not seeing the situation then it doesn’t exist? And why oh why does the media let him get away with all this? How do they benefit?

The black-lesbian-immigrant spokesditz assures us they’re totally committed to a secure border. So that’s all anyone else out here not among the #RulingClass truly needs to understand.

You mean the muppet spokesperson? She is not available right now. She is being interviewed by Disney concerning a new ride to replace Splash Mountain—the black muppet lesbian immigrant ride. It’s all dark and downhill.

This is a deliberate slap in the face to US citizens.

invaders are not migrants

The border is just an idea.

If the old pedophile went to the border, then the press pool would have to follow him there. Can’t have that.

If there was a US manufacturing boom, and I don’t believe for a second there is, Biden’s EPA would strangle it in the womb.