The plea deal means he has to testify against the Trump Organization, but he “will not implicate Mr. Trump or his family.” 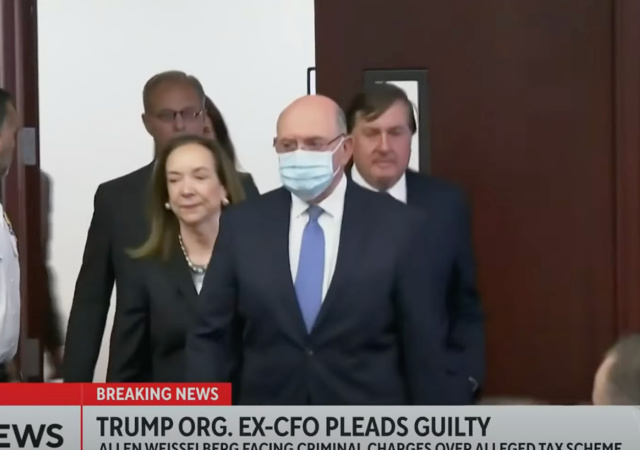 The Manhattan district attorney’s office indicted Weisselberg and the Trump Organization in 2021.

The office accused Weisselberg and the organization “of orchestrating a scheme in which some executives were compensated with special off-the-books perks. Mr. Weisselberg, the prosecutors said, avoided paying taxes on $1.76 million of his income over the last 15 years.”

A longtime senior executive at Donald Trump’s family business pleaded guilty on Thursday to helping it engineer a 15-year tax fraud, in an agreement that will require him to testify about the company’s business practices.

Allen Weisselberg, the former chief financial officer at the Trump Organization, entered his plea to all 15 charges he faced in a New York state court in Manhattan before Justice Juan Merchan.

Though Weisselberg, 75, is not expected to cooperate with Manhattan prosecutors in their larger probe into Trump himself, his plea will likely strengthen their case against the Trump Organization.

Prosecutors claimed the scheme allowed Weisselberg “to avoid paying taxes on leased Mercedes-Benzes, an apartment on Manhattan’s Upper West Side and private school tuition for his grandchildren.”

Weissellberg faced 15 years in prison. He will only serve around 100 days in prison and five years of probation.

The plea deal requires Weisselberg to testify in the Trump Organization trial “about his role in the scheme to avoid paying taxes on lavish corporate perks.”

However, he “will not implicate Mr. Trump or his family if he takes the stand in that trial, the people said, and he has refused to cooperate with prosecutors in their broader investigation into Mr. Trump, who has not been accused of wrongdoing.”

I wonder what sentences Democrats have faced when they have been in the same trouble over similar tax issues?

That would would be none

Sentences? Almost nobody, left, right, or center, even goes to trial for something common like this.

I’m safe because I always take the standard deduction but anybody with a complicated return will always be guilty of misinterpreting the code, if they want to get them.

Nah, they’ll just find an obscure reason why you were ineligible to take the standard deduction.
You don’t get to sleep soundly over this.

It doesn’t even have to reach that level. They’ll just turn some of the newly expanded IRS loose to find “income” you failed to report (remember the time your neighbor’s kid helped you carry those groceries into the house without charging you? Or your niece watched your kids for free?) and the burden is on you to prove them wrong.

He was the CFO. Literally anything he testifies that the Trump Organisation did that was dodgy taxwise can be laid at his feet. And he’s effectively got immunity.

So, it’s not about holding anyone accountable as they’ve literally let off the guy responsible. What can it then be about? Surely it’s not just theater, designed to make Trump look bad? Surely?

There are precedents without repercussions, only benefits.

Donald Trump is pursuing a RICO lawsuit against several parties who allegedly engaged in malicious persecution against him in the RussiaGate affair. Those parties include five Justice Department employees James Comey, Andrew McCabe, Peter Strzok, Lisa Page, and Kevin Clinesmith.
…
On August 4, Trump submitted to the judge his legal argument against the dismissal.

On the very next day, August 5, the FBI warrant to raid Trump’s home was requested and approved.

The FBI’s raid on Trump’s home was motivated by the FBI’s urgent fear that the judge might, within the next few days, allow Trump’s RICO lawsuit to proceed.
h/t Mike Sylwester/Althouse

Very unlikely. If he was alleging RICO it almost certainly had no merit. It’s never RICO.

Trump really is pursuing a RICO case against several DOJ and FBI related to Russiagate – all of whom were fired, convicted, or resigned as a result of their criminal actions.

In an unprecedented move, DOJ convinced a judge to substitute the US Government as a defendant in place of those originally sued, despite the fact that their firing/convictions over their actions had already proved they weren’t eligible for “westfall certification”.

Most of the documents that President Trump has to prove his case were just seized by the FBI at Mar a Lago.

Judge Reinhart, the same guy that issued the warrant for the raid, had been the Judge in the RICO suit but had to recuse himself (he was the 2nd of 5 judges that had to recuse). While he was the Judge on that case, he became aware of the fact that Trump had these documents, that they were at Mar a Lago, and that FBI already had a full inventory of them – from the WH officials that packed them in the first place, and from FBI’s visit to Mar a Lago to inspect them in Feb 2022.

So, he knew for a fact that the documents to be seized were related to Russiagate and Trump’s RICO suit against various FBI, CIA, DOJ criminals. And, on top of that, he had enough of a personal conflict in that RICO case that he had to recuse himself, and then went on to sign the warrant to seize the documents related to that case.

I don’t doubt that Trump is pursuing a RICO case. But I very much doubt that anyone is afraid of it, let alone that it explains the raid. So-called RICO cases are never valid. They are always thrown out, because they’re garbage. This one is extremely unlikely to be the exception that proves that rule. And both the FBI and the judge know this, so it is not plausible that they were shaking in their boots, or that they would launch such a desperate measure to prevent it.

A close relative cited this plea as proof that Jan 6 was an insurrection, that Trump is a menace to Democracy who set out to destroy the electoral system, and that now Trump’s role in all of it will be exposed.

Huh? Your nom-de-blog seems more appropriate for that relative than for you. As Bugs Bunny put it, what an ignoranimus

Just clever and witty enough to escape the LI rule on ad hominem attacks on other readers, kudos.

Huh? The attack is on his stupid relative. How does it relate to any reader?

My close relative claims that you are a Dem-paid NeverTrump troll. We can’t believe everything our “close relatives” tell us. Or should we?

Took a plea.
Meaning, the Epstein ledger is still in play somewhere.

Of course, this practice is completely legal for Congress, the FBI, etc.

It must be tough being the Reich Prosecutor for the Democrat Party due to the wide variety of charges that must be (pardon the expression) trumped up against President Trump, his officials, and his supporters across the country. How much easier it would be if The Party came up with an all-purpose charge like the old Soviet Union’s “Hooliganism.”