The policies are based in hysteria over bad data. 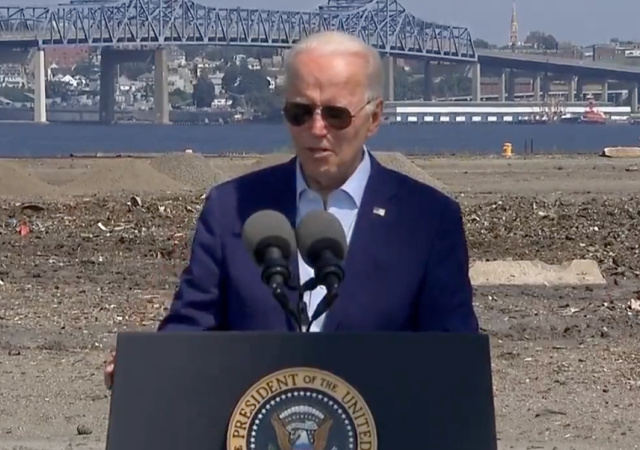 It may be a sign that the Democrats feel they will not be retaining power after the November election, so they are doubling down on their progressive, economy-crushing, liberty-destroying agenda.

After celebrating the Democrats in the Senate passing the ironically named “Inflation Reduction Act,” the progressives on the Los Angeles Editorial Board are now pressing Biden to declare a “climate emergency.”

Dozens of national emergencies have been declared since the 1970s and used against an array of threats, including weapons of mass destruction, terrorism, disaster and disease, and some remain in effect decades later. They’ve been declared by President George W. Bush in 2001 after the 9/11 attacks and in response to Hurricane Katrina in 2005, by President Trump in 2020 against the COVID-19 pandemic and, controversially, in 2019 to divert funding for a wall along the U.S.-Mexico border.

But unlike Trump’s misuse of that authority for his wall, there is actually a legitimate legal basis for calling climate change a national emergency, as Dan Farber, a professor at UC Berkeley School of Law, wrote recently. The U.S. would join nearly two dozen other national governments, and the European Union, which have declared a climate emergency in recent years, along with a growing list of cities and other local governments.

I will simply point out that “expert” predictions about future climate conditions have failed to pan-out time and time again.

Perhaps the most glaring of failed predictions involved vanishing snow and ice in the north. The Los Angeles Times reported in 2009 on a government ecologist’s prediction that all of Montana’s glaciers would be gone in 2020.

The reality? As recently as January, Montana’s Glacier National Park was reportedly replacing signs with that very warning.

CNN reported: “In 2017, the park was told by the agency that the complete melting off of the glaciers was no longer expected to take place so quickly due to changes in the forecast model, [park spokeswoman Gina] Kurzmen said. But tight maintenance budgets made it impossible for the park to immediately change the signs.”

Other reports relayed predictions that “Snowfalls are now just a thing of the past” (The Independent in 2000), “Snows of Kilimanjaro to Vanish by 2020” (The Vancouver Sun in 2008), and “Arctic summers may be ice free by 2020” (Lancaster Eagle-Gazette in 2013).

Furthermore, the proposed policies are based on hysteria over insufficient data. A new study has found approximately 96 percent of U.S. temperature stations used to measure climate change fail to meet what the National Oceanic and Atmospheric Administration (NOAA) considers to be “acceptable” placement for meaningful data.

The report, published by The Heartland Institute, was compiled via satellite and in-person survey visits to NOAA weather stations that contribute to the “official” land temperature data in the United States. The research shows that 96% of these stations are corrupted by localized effects of urbanization – producing heat-bias because of their close proximity to asphalt, machinery, and other heat-producing, heat-trapping, or heat-accentuating objects. Placing temperature stations in such locations violates NOAA’s own published standards (see section 3.1 at this link), and strongly undermines the legitimacy and the magnitude of the official consensus on long-term climate warming trends in the United States.

“With a 96 percent warm-bias in U.S. temperature measurements, it is impossible to use any statistical methods to derive an accurate climate trend for the U.S.” said Heartland Institute Senior Fellow Anthony Watts, the director of the study. “Data from the stations that have not been corrupted by faulty placement show a rate of warming in the United States reduced by almost half compared to all stations.”

..“If you look at the unperturbed stations that adhere to NOAA’s published standard – ones that are correctly located and free of localized urban heat biases – they display about half the rate of warming compared to perturbed stations that have such biases,” Watts said. “Yet, NOAA continues to use the data from their warm-biased century-old surface temperature networks to produce monthly and yearly reports to the U.S. public on the state of the climate.”

Incorrect projections, garbage data, and politicians abusing their power are a mixture deadly to a healthy economy and a prosperous, stable middle class.

Because the economy still has a little life in it and we can’t have that!

What is the circulation numbers of the Times compared to thirty years ago? Dead tree news is going to the land fill.

Cities are heat islands. As they expand, adding more asphalt and more cement and cutting down more and more trees, they get hotter.

200 years ago, towns with dirt roads that were mostly forested, were much cooler. The same spot today, is surrounded by 15 miles of cement and asphalt and the trees are gone.

You cannot compare the temperature readings from the forested town two centuries ago to the giant heat sink of today. It cannot be done!

It balances out IF you account for cow farts and use the hockey-stick graphing algorithm.

“When everything is an emergency…”

Well, no Dash, that reasoning doesn’t apply here. It’s just that the emergency in this case is a government that can’t be bothered to even try to argue for its policies, and must therefore always default to brute force because “it’s an emergency!”

The only emergency is the tragical Marxist party and it’s usurpations of the supreme law of the land.

They don’t even understand the workings of the climate yet they think it’s an emergency?

Climate science is at the stage where medical doctors were bleeding people to make them better.

He should leave this to Hunter whose laptop is loaded with scenes of his declaring an Emergent Climax.

The cognitive decline of POTUS is the nation’s true emergency.

The decline makes no difference. He was always a buffoon and a dumb-ass grifter.

Also, he hasn’t actually made a decision since he was installed.

There is a difference between a person who can make decisions and a person who is so totally helpless that he has no idea what is going on.

“IF” the President knows that there is a climate emergency I propose some actions to show leadership in addressing the crisis.
1. Abolish all use of private jets by any federal employee. Automatic job dismissal if in violation. I can heat my 160 year old farm house with coal and give off less co2 than 1/2 hour of flight of a private jet
2. Subsidy for an electric car? How about making the maximum payment be 1/8 of the buyers income for 7 years. This would make the purchase possible for almost anyone.
3. Cash incentives to plant peanut trees for shade to create cooling effect. Sorry but this one should be posted on April 1.

Lots of room for more suggestions

On the day Biden buys an ice cream cone in Barrow and it melts before he can get it to his fat gob, THEN and only then will it be time to declare a climate emergency.

Double dog dare them to try and call a Global warming emergency. Go ahead pour it on while you can.

Don’t think had much hurricanes so far this year btw

Indeed. Amazing how few hurricanes there have been. Of course, a single one will signal the end of the Earth…

The LA Times. What irony.
Of all the common reasons given by people over the past century for moving to California, the “great climate” is so far the only one that the politicians and their lapdog media have been powerless to destroy.
Looks like that really irks them.

climate: of mental or moral atmosphere, from 1660s.

They’re correct that there have been diverse instances and continuums of catastrophic progress from moral to ethical religions.

Climate, schmimate, I don’t really care if they want to declare a “climate emergency”. What would concern me much more is what measures they might intend to impose on everyone in the name of enforcing this “emergency”. That is the scary part of this possible scenario. I don’t even want to speculate, but based on recent history during the Virus Era, the measures could be onerous. and have severely harmful effects.