Pushaw: “Now the gloves are off” 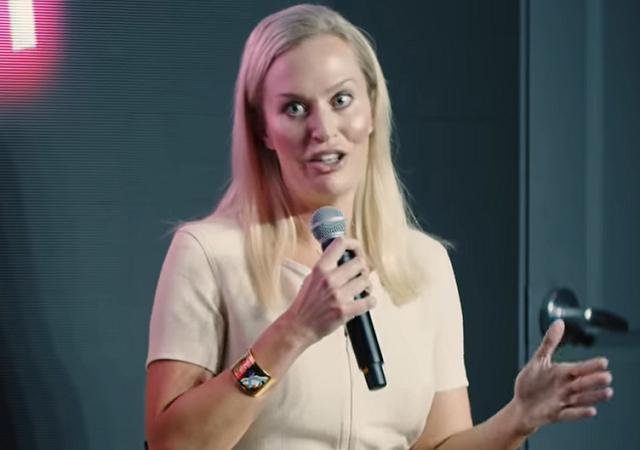 Christina Pushaw has been one of, if not the, best press secretaries to serve any governor or president. On Friday, she announced that she was tendering her resignation, effective the same day, to serve as Gov. Ron DeSantis’ Rapid Response Director on his reelection campaign.

Christina Pushaw began working for the governor’s office as DeSantis’s press secretary a little more than a year ago, but in that time she’s earned a reputation among Florida politicos and journalists for her combative online presence and frequent squabbling with reporters and virtually anyone willing to criticize her boss.

. . . . Still, he appears in a solid position to win a second term in the governor’s mansion in November. He faces no primary opposition and polling shows him leading both of his top Democratic challengers, Rep. Charlie Crist and state Agriculture Commissioner Nikki Fried.

Now, the gloves are off 😬 https://t.co/zTRxWoTcig

If you can’t see it in this tweet, you can read the full resignation letter here.

Pushaw has a well-earned reputation for cutting through the leftist garbage and setting the media straight.

Pushaw has earned notoriety for being hard-hitting against the governor’s critics, particularly on social media, and debunking false narratives in the media, like the misinformation about Florida’s Parental Rights in Education bill.

“Before Governor DeSantis signed this into law, there was a full-court press from the media trying to smear and demonize proponents of the bill as ‘hateful, bigoted, homophobic,’ and many other false and hurtful epithets,” Pushaw told PJ Media in an exclusive interview last month. “Due to the corporate media narrative, many Americans incorrectly believed that the bill targeted gay parents. Simply reading the text of the legislation would have dispelled this misconception.”

Here’s a further sampling of her effective pushback.

As always, mainstream media are in lockstep with marching orders to use the Orwellian euphemism “gender-affirming care” instead of accurately describing what the Florida Medical Board is addressing.

I even see conservatives using this phrase. Just call things by their real names pic.twitter.com/NzPlLaNf3Z

“Affirming” to me means accepting kids as they are, assuring them that there’s nothing wrong with their body. True affirmation means helping them accept their body as they grow up, through therapy & support, as with teens who have eating disorders or body dysmorphia generally.

Wow, thank you @MiamiHerald this is a great headline! pic.twitter.com/lwcfnfnl6T

The latest fake news hysteria is about the new Gadsden Flag license plate @GovRonDeSantis announced to help Florida veterans in need. Media is smearing this as a "racist"/"domestic terrorist" symbol, which is absurd!

Hi @jackshafer! FYI, you are wrong about the reason @GovRonDeSantis doesn’t talk to liberal media, including Politico. He isn’t worried about “negative press”; you’re always negative.

It’s just that he doesn’t care.

And he doesn’t want to give you clicks or ratings. pic.twitter.com/MwCCfYN8Ye

And that’s apparently with the gloves on.

Last month, Dave Rubin did a great interview with Pushaw.

She’s clearly excited about the move.

Thanks so much! I’ve always said I wanted to be in the place where I could be most helpful to his mission and agenda for Florida. And for now I feel like it’s this opportunity on the campaign 😊🙏🏼

Thank you so much. I look forward to working with you to keep Florida FREE! ❣️❣️❣️

While the regressive left are busy trying to push leftie Floridians to vote for Charlie Crist (R, D, I, whichever way the wind is blowing), I haven’t seen a serious poll that remotely suggests DeSantis is in danger of losing his reelection bid in November. So this move is rather interesting. Why move one of your best visible assets to the campaign unless there is more brewing here . . . or internal polling suggests a tighter race than has thus far been indicated.

5 days he’s been in hiding,

Danny? Is that you?

No, I tell the truth even it is painful.
Don’t be a dope.

Forget gloves. It’s time to take off the earrings.

Conservativetreehouse feels DeSantis is deep state, which I use to laugh at

But his non reaction and lack of real support for President Trump has me very concerned.

We have seen this playbook too many times…

If DeSantis turns on Trump, he’ll have no one but Liz Cheney base to vote for him nationally.

If Christina is right and DeSantis is a man of his word, then he already said he wouldn’t run against Trump. If he does run then what does that tell you about him? It probably wouldn’t turn out well for him. The large bench that ran against him in 2016, what are their presidential prospects. “Little Marco”

DeSantis would be a far better candidate for 2024. Quicker on his feet and more nimble and not thin skinned with press as Trump is. Plus he’s young. Trump would be older than Biden was when he took office. No more candidates in their 70s

Seriously? He is a GOVERNOR! He had a statement the first day. Why would you expect him to say more? Turn off cnn.

Go back to your Abbott hating…the adults are speaking

Your dopes if you can’t figure this out.

It’s the same damn playbook script the republicans use every time to make you think you are choosing, when it is their very small club that chooses.

Trump broke their script and they are determined not to let any deplorable’s make a decision ever again.

There are over 30 Republican governors. How many of them have given a statement?

Most of them are squishes. Some of them try to be conservative occasionally, Abbott lags behind DeSantis but seems like he doesn’t initiate this stuff on his own

There are over 30 RINO governors.

“There are over 30 Republican governors.”

But only one governor of FLORIDA, where the atrocity occurred to a citizen of the state.

If you missed DeSantis’ statement you are an idiot, everyone else here saw it, it was very impressive and because I think there is a 100% chance you saw it you are clearly here in bad faith.

You may want to throw the 2022 election and hurt Ron DeSantis but I don’t.

You are just a shill for the GOPe and the democrat party, both owned by the CCP.

Nobody has made a stronger statement than he has. He has a state to run, a legislature to keep happy in order to keep producing victories, a campaign to oversee to make sure he is re-elected and you want him to repeat himself after making himself perfectly clear……

Well, well, well, shades of the Trump nomination days, where I was the one to tell you, before anyone else by the way, that Trump would win the nomination, and he would win the election, and further, he would be the most effective conservative president since Eisenhower.

I told you biden was the chosen one and would be the d nominee ( I did not see the massive cheating however that would install him in the white house).

I HOPE i’m wrong about DeSantis, but –
He has made lots of noise and done some good things in Florida, after Trump helped him get elected
He has a legislature that goes with him, not against him like Trump had (even when controlled by the R party)

For those that recall his pledge not to run if Trump runs:

If you don’t know this, listen closely, the GOPe is in bed with the D party and part of the engineering effort of sending the FBI to Mar a Ago in an illegal fishing expedition. From this the R party expects Trump to be criminally charged and they will then refuse to nominate him*. And in steps their choice, the governor from Florida, carefully groomed and fooling you all.

DeSantis is being led right now. His silence is quite telling. True believers are always the last to know. It’s a religious thing.

Watch. And do try to learn. Don’t be fooled again.

*this in spite of the fact that the US Constitution spells out the specific requirements for president, and US Code does not alter, change, or add to the constitution. A president could be elected and serve while being in a jail cell. But the deep state never follows the constitution.

While you made that anti-Desantis statement to yourself DeSantis was working to get CRT, radical gender theory and other leftist ideologies out of schools, working to regulate businesses to force them to respect the political, cultural and religious beliefs of their employees, revoking a sweet crony capitalist deal Disney had in reaction to Disney inserting itself into Florida issues sending a message to businesses in all 50 states that the simping relationship the Republican Party had with them is over, ferociously attacking theh FBI as taking as into banana republic territory, presiding over a strong state economy that is strong because he kept Florida open, working against the transgender ideology in and out of school……if DeSantis is what the establishment looks like I like it.

Stop being a moron.

Danny, you are a deep state owned CCP plant and everything you say is made up to push a particular narrative. Any time you appear as a “conservative” it is pretend so that you can push the big lie.

Like your lie that the chines have an all powerful military and they will invade Taiwan because of the pelosi trip. And nothing.

I always tell the truth and my only interest is freedom and liberty for all.

I will occasionally make a mistake, but it will always be a mistake, not pushing the big lie/con like the CCP Danny’s are here to do.

She has been pretty awesome.

I would definitely rapidly respond to her. I am sure the Guv has frequent strategy meetings with her.

Christina Pushaw is a savage. She adopts the messaging tactics of the d/prog and uses them without remorse against the d/prog and their media allies. It’s beautiful to watch the d/prog cry and complain when she spanks them on line and in public using their tactics against them. Great asset for DeSantis and the populist right.

Her best yet is (not an exact quote) “my suggestion is you cry about it and write the same hit piece you would have written anyway”, I hope she continues for many more years.