Dutch farmers protest regulatory extremism designed to meet unreasonable emissions targets and which will cut the levels of agricultural production. 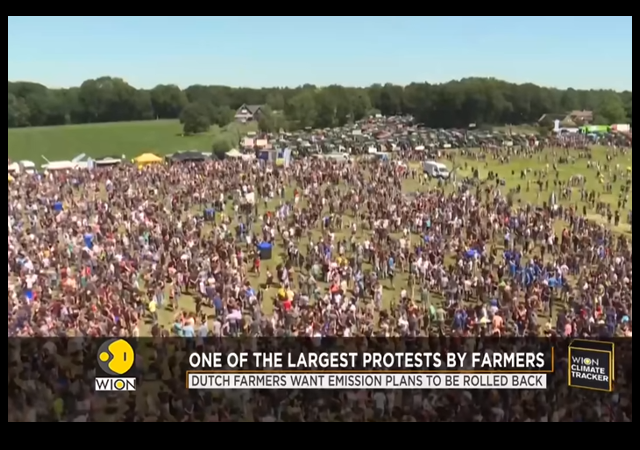 Mercifully, the Supreme Court slammed a flaming stake into the heart of Biden’s plans to use the Environmental Protection Agency to enact the “Green New Deal” without going through the proper legislative process.

However, there is troubling news from the Netherlands about another life-essential chemical being smeared: Nitrogen.

Thousands of farmers were gathering in a village near the centre of the Netherlands on Wednesday to protest a government plan to curb nitrogen pollution, many travelling by tractor from all corners of the country and snarling traffic.

The protest in Stroe, 70 kilometres east of Amsterdam, follows the introduction last week of targets for reducing pollution by harmful nitrogen compounds in some areas by up to 70% by 2030 – the latest attempt to solve a problem that has plagued the country for years. read more

Reductions are necessary in emissions of nitrogen oxides from farm animal manure and use of ammonia for fertilisation, the government says. Nitrogen oxides in the atmosphere help form acid rain, while fertiliser washed into lakes can cause algal blooms that kill marine life.

Farmers argue the targets are poorly conceived and unfair. They are expected to lead to a 30% reduction in the number of Dutch livestock, with effects more concentrated in agricultural areas bordering nature preserves.

The restrictions have arisen because Dutch regulators have decided to create unreasonable emissions targets and force the agricultural industry to meet them.

The Dutch governing coalition has mandated reductions in emissions of nitrogen oxides and ammonia of up to 70% in many areas of the country close to protected nature areas – even reaching as high as 95% in some places. The government has been forced to act after courts in recent years began blocking permits for infrastructure and housing projects because the country was missing its emissions targets.

The government has earmarked an extra 24.3 billion euros ($25.6 billion) to finance agricultural reforms that will likely make many farmers drastically reduce their number of livestock or to get rid of them altogether.

The farmers are right to be worried. In fact, anyone who likes to eat regularly should be deeply concerned about the load of regulatory nonsense that has just been dumped on Dutch agriculture.

With over 50,000 farmers and millions of animals occupying the Netherlands, many are now facing shutdowns. New regulations may force farmers to cut production and herd numbers by up to 30 percent to meet emission requirements by the state.

The government is slated to cut nitrogen oxide and ammonia by 50 percent by 2030 and has already allocated €25 billion to assist in shifting farms to meet new requirements. The government in the past has called on farmers to use feed for their animals that contains less protein as a way of reducing ammonia emissions.

…“I don’t think I have a future in farming because we must reduce our cattle by 70 percent. With only 80 cows, this won’t be profitable, so we will have to close,” Jessee Baars, a young Dutch dairy farmer, told France 24.

The Dutch are the second-largest exporter of agricultural commodities behind the United States. If the Dutch farmers are forced to comply with this insanity, then the chances of regional and global food scarcity crises increase substantially.

So now they want to declare [checks notes] 78% of the planet’s atmosphere “pollution.”

The regulations target nitrogen compounds, not nitrogen itself. The regulators’ concerns have some basis in fact, because in some agricultural areas, over-use of fertilizers has raised nitrate levels of aquifers to levels that are quite hazardous, especially for infants.
https://www.health.state.mn.us/communities/environment/water/contaminants/nitrate.html

That’s why NOx, supposedly a poison, is actually a good thing. It’s bioavailable fertilizer for plants, in the air!

They’re trying to starve us. That’s the common theme with this “green” agenda, it prevents stuff from growing.

Next step for the commie progs: Brawndo! It’s got electolytes!

If we knew how to terraform planets and asteroids these people would be against it because it meddles with their precious (non-existent) ecology.
Nothing will satisfy them short of returning all of mankind to a primitive hunter/gatherer economy. Do you know how much agriculture interferes with the native crabgrass?

“Nothing will satisfy them” — truer words have never been spoken

Dentists administer nitrous oxide daily as an anaesthetic and everything seems fine. Not sarcasm.

I’m sorry, I simply don’t believe it. This coming from the same field as the vaccines, masks and lockdowns that didn’t work and ended up killing people. By hindering farmers and forcing them to close, they will hinder food production…. and people will die. This is a concerted effort to kill off most of the population.

You are correct. The biggest problem with Nitrogen pollution is not emissions but runoff due to the overuse of fertilizer causing downstream algae blooms among other problems. More efficient use of fertilizer is both cheaper for the farmer and causes less runoff. It’s been a problem for years. The problem here is that the Dutch set unreasonable goals, couldn’t meet them so are turning to a group that the government thinks it can browbeat into submission.

Are you still breathing, commrade?

The left/green government banned all manufactured fertilizer about a year ago. Only organic farming allowed.

As a direct result, today the country is without food, fuel, in anarchy, and quite literally on the edge of famine.

Naturally, our media doesn’t want to educate the sheeple about this story, which is why you may not have heard of it.

Coming soon to a country near you!

Nah! You’re all wrong! The next one the geniuses are working on is —–
Oxygen pollution.

They are already working on that, by trying to reduce CO2.

They can do a cheese product version of Gouda with whey protein concentrate. No need for cows.

They are still angry that Malthus was wrong and they intend to make sure that he is vindicated.

It sure won’t be actually educating themselves on what does in fact move the climate.

If the Dutch govt is actually serious about nitrogen then they would block all food imports whose production methods don’t comply.

They won’t do that because it isn’t really about nitrogen or methods of farming. It’s only about power and control.

That would be an EU initiative not a Dutch one given its a free market. You’ve also committed the black and white fallacy. Banning is one method but probably ill advised, other policies that might be tax breaks for organic farming imports or tax increases for the inverse. Your conclusion of its all about power and control doesn’t really follow. You lot seem obsessed by the idea every action is somehow an attack on you personally.

The article we are discussing specifically says ‘the Dutch governing coalition has mandated’ these policies. Reading comprehension doesn’t seem to be your strong suit.

Even were it an EU policy v a Dutch policy perhaps you have heard of Brexit? The Dutch govt could decide to withdraw from the EU if they didn’t support a supposed EU policy that would harm their agricultural sector.

The Netherlands is the second largest agricultural exporter in the world. There is way more to this than meets the eye.

A skeptical, cynical type might suggest that reviewing the history of the extreme environmental movement and its impact on the energy sector would reveal a few clues as to what the future might hold for the agricultural sector.

The life-haters are making progress.

Mercifully, the Supreme Court slammed a flaming stake into the heart of Biden’s plans to use the Environmental Protection Agency to enact the “Green New Deal” without going through the proper legislative process

Not to worry, EPA is using ozone and wastewater rules to crush energy production and save the planet.

I don’t think I have a future in farming because we must reduce our cattle by 70 percent. With only 80 cows, this won’t be profitable, so we will have to close,” Jessee Baars, a young Dutch dairy farmer

Mandatory veganism (no meat or dairy), exactly as the WEF envisions. To our bug diet future!

The newly proposed Ozone rules by the EPA for the Permian Basin will devastate oil and gas production.
The out of control EPA has needed to be disbanded for a few decades now.

This, on the heels of advising people to eat less red meat, because it’s bad for the environment. Coincidence? I think not.

If bureaucrats can’t convince people to abide by their plans, they will force compliance.

Note that no small part of the planet’s ability to produce food is coming from the increase in atmospheric CO2, another compound the environmentalists want less of.

Nitrogen and phosphate fertilizer runoff pollution into waterways IS a very big deal.

The gas stuff is the newly conjured nonsense.

True and it’s fixable. The surface runoff water could be directed to holding ponds and those ponds stocked with plants, bacteria, algae or whatever that use the excess nitrogen and phosphate. Perhaps even using hydroponics to use that nitrogen to create another crop. Leafy veg generally need lots of nitrogen.

Conceptually it’s similar to a 3 sisters garden in selecting combinations that bring it closer to balance. Not a perfect analogy but that’s the gist.