An armada of groups have filed in support of Oberlin College, including the NAACP, Reporters Committee, Ohio Association of Civil Trial Lawyers, National Coalition Against Censorship, and Ohio Chamber of Commerce. Will any groups support the Gibsons? 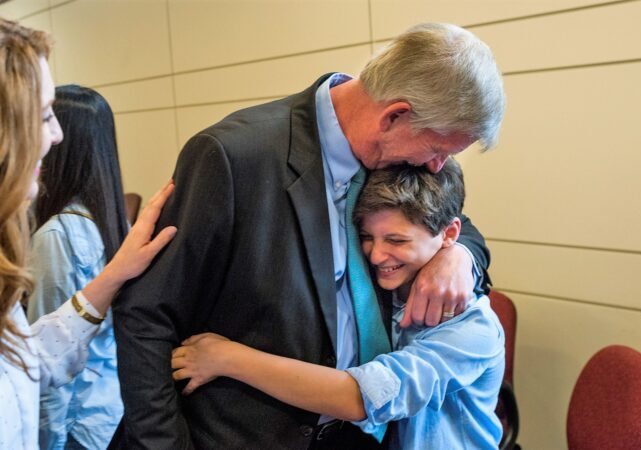 On May 13, 2022, Oberlin College and Meredith Raimondo filed an appeal in the Ohio Supreme Court, after losing their appeal from the massive trial verdicts. We covered the trial court verdict and appeal decision in Appeals Court Upholds Gibson’s Bakery Massive Verdict Against Oberlin College.

You can view the filings at the Ohio Supreme Court’s Case Docket page, including the Notice of Appeal ….

Here is the standard under which the Ohio Supreme Court takes what are called Jurisdicational Appeals under Ohio Sup. Ct. Rule of Practice 5.02(A) (emphasis added):

As used in these rules, a “jurisdictional appeal” is an appeal from a decision of a court of appeals that asserts one or more of the following:

The Gibsons now have filed a Cross-Appeal, to preserve their right to argue that the statutory cap on punitive damages, which reduced their judgment by over $10 million, is unconstitutional as applied to their case.

The Cross-Appeal is not denominated as “contingent,” which is how they cross-appealed in the lower appeals court. The reason to make a cross-appeal “contingent” would be to be able to drop the cross-appeal if the appeal were rejected on procedural or other grounds. In other words, if you can live with the judgment, you don’t want any appeals court to rule on it if you can avoid it.

But that’s not how the Gibsons filed the cross-appeal, It’s not contingent, and it argues the grounds under which the Ohio Supreme Court evaluates whether to take cases are met here as to the cross-appeal (emphasis added):

Appellees/Cross-Appellants, Gibson Bros., Inc., Lorna J. Gibson, Executor of the Estate of David R. Gibson, Deceased, and Allyn W. Gibson, Deceased, and hereby give notice of cross-appeal to the Supreme Court of Ohio from the judgment of the Lorain County Court of Appeals, Ninth District, entered in Court of Appeals Case Nos. 19CA011563 and 20CA011632, on March 31, 2022. Appellants/Cross-Appellees, Oberlin College and Meredith Raimondo, filed their notice of appeal on May 13, 2022 and filed a copy of the judgment and opinion which is the subject of this cross-appeal.

The Gibsons still could argue that the main appeal contesting the trial judgment does not meet the standard for accepting cases, because the issues on that main appeal revolve around factual determinations that are left to the trier of fact, and any legal issues either have been waived or mischaracterized. If they went for the Royal Flush, the Gibsons could argue that the main appeal should not be accepted, but their cross-appeal should be accepted because the cross-appeal presents a substantial and important legal issue as to the constitutionality of the punitive damage cap.

Something seems off, however. Maybe I’m surmising too much and reading too much into this, but I get the feeling that the Gibsons may view it as inevitable that the Ohio Supreme Court will take the case given the massive national publicity about the case and the big name groups lining up to support Oberlin College’s request. So they want to make sure that the Court also accepts their cross-appeal, and don’t want it viewed as contingent.

These questions likely will be answered when the Gibsons file their Memorandum in opposition to the appeal and in support of the cross-appeal. Those papers are due June 13.

BONUS QUESTION: An armada of groups have filed in support of Oberlin College, including the NAACP, Reporters Committee , Ohio Association of Civil Trial Lawyers , National Coalition Against Censorship , and Ohio Chamber of Commerce.

As of now, the Gibsons stand alone against vast and wealthy power. Will any groups support the Gibsons?

Who can we “suggest to “ to support these fine, honest amd innocent people

How can we help themes

I’m on team Gibson.
Maybe we should sell shirts.

From a lawyer standpoint I think the Gibson’s appeal issue is more intellectually interesting and also has a wider impact. I think the question of the Ohio cap at 2x without allowing the court to perform an analysis as in BMW v Gore is a solid question. FYI that is why the Chamber of Commerce filed an Amicus is this issue.

I was troubled when I saw the Chamber file on behalf of Oberlin but this provides some clarity. I still believe they should have just stayed out of it.

Are the Gibsons’s attorneys in touch with any pro bono conservative legal groups like Beckett?

Why would the Ohio Association of Civil Trial Lawyers argue that the punitive damages limitation is Constitutional? Is that not an argument against their own monetary interests? I don’t understand.

Never mind. They represent the corporations.

That’s their position today. Wait until next year when the opposite will benefit the big money class…

What is an Oberlin degree good for? Well, in the case of Beto O’ Rourke lookalike Orion Krause, it prepared him, three months after graduation in 2017, to beat three family members’ heads in with a baseball bat plus that of a family health aide for good measure. The Massachusetts court lowered the charges to second degree murder when Orion passionately explained that he was just using his Oberlin-acquired skill set to battle white privilege.