Breaking With Past, American Association of University Professors Refuses to Condemn Boycott of Israel By Middle East Studies Ass’n

Breaking With Past, American Association of University Professors Refuses to Condemn Boycott of Israel By Middle East Studies Ass’n

For decades, AAUP has condemned academic boycotts, including boycotts of Israel. Reflecting AAUP’s increasing radicalism and anti-Israel hostility, the association will not offer a statement condemning MESA’s boycott, according to a spokeswoman. 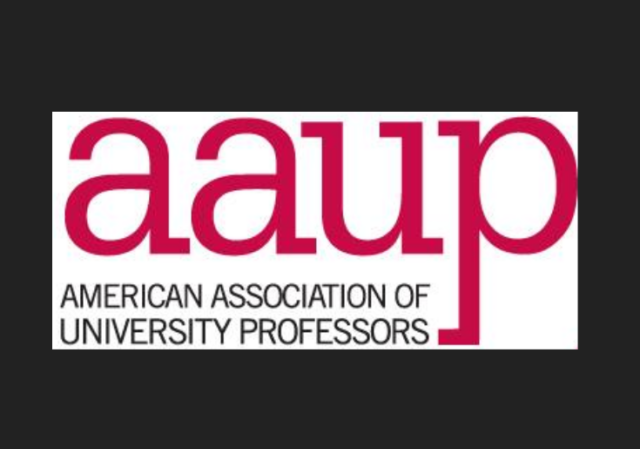 The American Association of University Professors (AAUP), which claims to be a steadfast opponent of academic boycotts, “has no current plan to issue a statement” regarding the Middle East Studies Association’s recently-ratified anti-Israel academic boycott resolution. That’s according to a statement provided to Legal Insurrection by AAUP Media and Communications Specialist Kelly Benjamin.

This is a change for AAUP. In 2005, the association’s Committee A on Academic Freedom and Tenure issued a strong anti-boycott statement declaring:

[S]ince its founding in 1915, the AAUP has been committed to preserving and advancing the free exchange of ideas among academics irrespective of governmental policies and however unpalatable those policies may be viewed. We reject proposals that curtail the freedom of teachers and researchers to engage in work with academic colleagues, and we reaffirm the paramount importance of the freest possible international movement of scholars and ideas.

AAUP followed up the next year with a more detailed report. Its first three recommendations were:

1. In view of the Association’s long-standing commitment to the free exchange of ideas, we oppose academic boycotts.

2. On the same grounds, we recommend that other academic associations oppose academic boycotts. We urge that they seek alternative means, less inimical to the principle of academic freedom, to pursue their concerns.

While recognizing the decisions of individual scholars to choose not to participate in academic activities, AAUP concluded that an “organized academic boycott is a different matter.” AAUP criticized the Association for Asian American Studies’ 2013 Israel boycott resolution “and would instead urge that organization and its members to find other means to register their opposition to Israeli policies.”

The American Association of University Professors (AAUP) is disappointed in the vote announced this morning by the membership of the American Studies Association (ASA) to endorse an academic boycott of Israel. While the AAUP takes no position on the Israeli-Palestinian conflict, we have opposed all academic boycotts in principle since 2005 when we published our report On Academic Boycotts.

The AAUP has maintained that position ever since. Until now. Now AAUP will remain silent in the face of action by MESA that is an offense not only to AAUP’s stated principles, but to academic freedom, as noted in an Op-Ed last December at the NY Post, Middle East Studies Association’s anti-Jewish BDS backing is a frontal attack on academic freedom

What changed? In a topic Legal Insurrection will be exploring in depth in future posts, AAUP Committee A membership, which governs academic freedom, has become increasingly hostile to Israel and supportive of the Boycott, Divestment and Sanctions movement.

Recently, Committee A objected that legislative efforts to fight anti-Semitism, which incorporate the International Holocaust Remembrance Alliance definition of anti-Semitism, threaten faculty free speech rights. On March 24, Committee A published a statement complaining that IHRA’s definition “threaten[s] academic freedom” by allegedly suppressing “criticism” of Israel. In fact, the IHRA definition does not condemn mere criticism, but rather points out that efforts to delegitimize the Jewish State (as opposed to criticizing particular policies of the state) are an indicator of anti-Semitism.

“The AAUP’s March 2022 statement is another step in the escalating anti-Zionism of the AAUP’s most important committee, the source of its major statements since 1915,” says former AAUP president Cary Nelson with regard to the Committee A anti-Semitism statement. He continued, “When the AAUP says, ‘There is a clear connection between recent laws on antisemitic speech and those on teaching about racism,’ it means to condemn Israel as a racist state.”

AAUP now is shying away from protecting the academic freedom not only of Israelis, but of Americans who want to interact with Israeli academic institutions. This is a sad day for academic freedom.

What do you want to bet that all those professors belong to the party of tolerance and inclusion.

And wouldn’t hesitate to fuck a child.

How many of them are emotionally disturbed, and otherwise unemployable?

Such vile and feckless dhimmitude. Standing with evil, and, proud of it.

No definition of antisemitism can threaten faculty free speech rights. You’re free to be an antisemite if you like, just as you’re free to hate black or gay people. You can say that Jews should be gassed, just as you can say that black people should be enslaved, or that gay people should be thrown off buildings. Nobody can stop you. If you have tenure you can’t even be fired for it. So how does clarifying the definition of antisemitism affect you?

On March 24, Committee A published a statement complaining that IHRA’s definition “threaten[s] academic freedom” by allegedly suppressing “criticism” of Israel.

Depends what you’re criticizing it for. If you criticize Israel for existing, or for defending itself in the same ways that all nations under threat do so, then you’re an antisemitic f***. You can still do that if you like, but then everyone will know what you are. On the other hand if you want to criticize Israel for expelling thousands of Jews from their homes merely because it had decided Jews should not be allowed to live where they were, or for abridging the freedom of speech, the RKBA, the right of non-Moslems to pray on the Temple Mount, or for keeping the price of housing insanely high by locking up land from development, go right ahead, nobody would dream of stopping you.

Sure. People use the IHRA definition of anti-semetism to shut down criticism of Israel.

Hell, people on here accuse me of anti-semetism when I criticise Israel for breaking international law.

You’re one of them. Congratulations on defeating your own point.

AAUP, the new spelling for BIGOTS.

AAUP has gone 100% trans, including the bottom work.

The AAUP has finally come around to wokeness. What took them so long?