“I am shocked that a med student would show so little respect toward faculty members. It worries me how he will do on wards.” 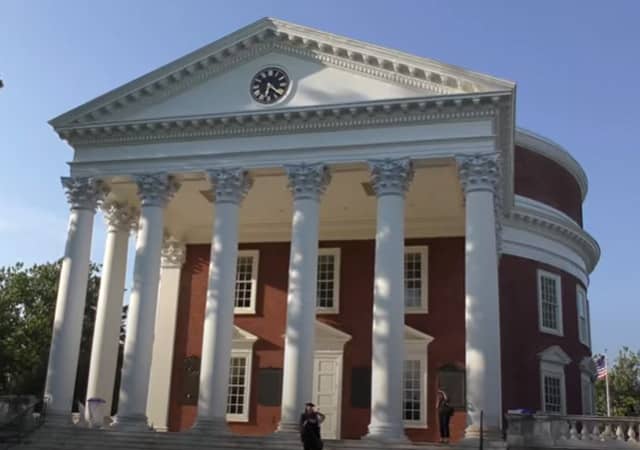 A medical student at the University of Virginia attended a talk on microaggressions in 2018 and asked questions that were deemed problematic. He was subsequently banned from campus.

A court just ruled that his lawsuit against the school can proceed.

A Medical Student Questioned Microaggressions. UVA Branded Him a Threat and Banished Him from Campus.

Kieran Bhattacharya is a student at the University of Virginia (UVA) School of Medicine. On October 25, 2018, he attended a panel discussion on the subject of microaggressions. Dissatisfied with the definition of a microaggression offered by the presenter—Beverly Cowell Adams, an assistant dean—Bhattacharya raised his hand.

Within a few weeks, as a result of the fallout from Bhattacharya’s question about microagressions, the administration had branded him a threat to the university and banned him from campus. He is now suing UVA for violating his First Amendment rights, and a judge recently ruled that his suit should proceed.

Here was what the student said.

“Thank you for your presentation,” said Bhattacharya, according to an audio recording of the event. “I had a few questions, just to clarify your definition of microaggressions. Is it a requirement, to be a victim of microaggression, that you are a member of a marginalized group?”

Adams replied that it wasn’t a requirement.

Bhattacharya suggested that this was contradictory, since a slide in her presentation had defined microaggressions as negative interactions with members of marginalized groups.

It was this exchange that caught the notice of an assistant professor, who helped put on the event. She filed a sort of official complaint against him:

“This student asked a series of questions that were quite antagonistic toward the panel,” wrote Kern. “He pressed on and stated one faculty member was being contradictory. His level of frustration/anger seemed to escalate until another faculty member defused the situation by calling on another student for questions. I am shocked that a med student would show so little respect toward faculty members. It worries me how he will do on wards.”

What followed was a mandatory psychological evaluation and ultimately a suspension.

Here are some excerpts from the opinion that found his lawsuit can proceed:

Bhattacharya’s speech at the panel discussion—questioning and critiquing the theory of microaggression—does not clearly fall into any category of speech that UVA Medical School can regulate or prohibit. His comments and questions did not “materially disrupt[] classwork or involve[] substantial disorder or invasion of the rights of others.” Tinker, 393 U.S. at 513. Defendants argue that because “the purpose of the panel discussion was to teach students about a social issue in medicine, it was not the time or place for Plaintiff to dispute the validity of the subject matter, argue with faculty, or disparage a professor’s substantial research in the field.”…

It’s difficult to believe this entire affair was started by questioning microaggressions.

Is this really what higher education was meant to be?

More of this required from students, faculty, and staff.

Stop giving in to bullying.

That sounds good, but effective legal representation almost always costs a lot of money. Add in the fact that much of the judicial system is an open sewer of partisanship, bigotry and corruption, and a lawsuit like this starts to look like a risky gamble.

Oh, okay then. I take that back.

It’s stunning, but also not so stunning, that a good part of the defense argument is, “Because I said so, therefore, there is no room for argument.”

How well I remember the “Question Authority “ bumper stickers in Berkeley in the early 70’s. Now I am looking for “Questioning Authority equals Dismissal”

I remember those days of sickening hypocrisy. Question authority with the goal of destroying it. And then reestablish it with an iron fist. Down With the Establishment. They won big time.

This is generally regarded as incoherence. No matter for Lefties, though; they allow for their own exemption from the rules under which they came into powered being.

IOW, Castro et all would or do smile at their performance, good liars and sociopolitical criminals — thieves of state — all.

Suing them for punishing the questioner is justice.

Winning the lawsuit will be sweet revenge.

“Beverly Colwell Adams is a newly retired assistant dean of the College of Arts and Sciences and associate professor emeritus in the department of Psychology at the University of Virginia. Dr. Adams earned the BA in Psychology from Spelman College, and MS and PhD from the University of Pittsburgh. She studies subtle acts of exclusion, or microaggressions.”

What a pathetic joke of a career. She specializes in studying “microaggressions” and is such a delicate little snowflake that she lost her mind because a student asked a question about an obvious contradiction in her own materials?

Modern academia has become a hotbed of sheer idiocy, and this is a good example of just how stupid and nonsensical this garbage is. The student politely asked some relevant questions about the material being presented, but because those questions highlighted how idiotic and contradictory the material was, the presenters had a melt-down and accused the student of abuse.

These people are morons and a disgrace to academia, or at least to what academia is supposed to be about, which is the pursuit of knowledge.

More and more, I think my beliefs that both psychology and psychiatry have all of the legitimacy of palm reading.

I used to regularly ask these kind of questions at mandatory “Sensitivity Training” sessions when I was in the Army. Then, I just got dirty looks from the briefer, now, I’d probably be court martialed for insubordination. Or at least short-notice-transferred to a weather station in Alaska.

Sensitivity training in the ARMY?? That is SOOOOO NUTZ!!

Under whose presidency was this idiocracy in effect?

Also, wasn’t there a long-running TV show about a doctor who questioned the conventional wisdom, ie. wouldn’t do well in the wards?

He asked questions during a panel discussion and because of that they said he posed a threat to the university? What a crock!

The panel discussion was in late October 2018 and a judge is just now ruling that the lawsuit can proceed, two and a half years later? Whatever happened to the concept that justice delayed is justice denied?

It’s in Hell, having a beer with “Constitutional amendments are absolute.”

I recommend reading the opinion — the actions of the university are truly astonishing!

And then the next day, he gets an email stating that in THREE HOURS there will be a committee meeting to discuss his enrollment status, and “inviting” him to attend. Luckily he read his email promptly!

And then at the meeting, where he suddenly and unexpectedly has to defend why he shouldn’t be expelled, he is told that he is being “defensive” and that this is proof that he should be expelled!

You can’t make this stuff up!

How many of the committee members were women with hyphenated names and degrees in nonsense fields?

Where was he? The University of Oceania?

It is encouraging to see a glimmer of sanity in the legal guild.

The medical student’s name suggests someone of recent immigration heritage of the family and , dare I say it, someone with a skin tint not usually considered “white”. Just guessing, but here we have an intersectional clash. POC upended by microaggression? Can one accuse the wokenesses of racism?

Yes one can accuse them of that, but then they will slash back and expel you or whatever they can do to destroy you. They are tyrants and they never face the appropriate personal consequences.

Apparently they consider it urgent to get rid of independent thinking in medicine. Too many doctors not pushing the party line.

Isn’t this how things work in fascist countries? Nazi Germany, Communist and Socialist countries don’t tolerate those who ask difficult questions. This is what will happen to the USA if the progressive fascists (Dems) aren’t defeated.

ConradCA: As the case demonstrates, it has been happening for a few years already.

UVA is an extremely prestigious university with a bunch of arrogant fools in charge (which isn’t unusual). They have a god complex at times honestly.

It’s an overrated public that charges like a private. I don’t know where it got its cool factor from, but it’s not so special. It’s just a state U.

We’re all being forced to eat from the wrong one of the two distinctly unique trees in the Primordial Garden, as it were.

Is this really what higher education was meant to be?
Yes. By the Progressives who started taking it over in the mid-1900s.

Can’t wait to hear what the “substantial research in the field” actually entails. When I was actively doing medical research, none of it was “making stuff up” which seems to encompass the entire area of microaggressions.

Are we watching freedom die? I think so. And it is being killed by our “elite” institutions. Obviously the Universities are a cesspool of Marxism and getting away with violating our constitutional rights.

UVA law school is very much a part of the legal establishment at the highest levels. Scalia taught there.

This is very disturbing. America is dying.

“…or disparage a professor’s substantial research in the field.”…

Now pull the other one. Since when did making up total bollocks to suit an agenda require substantial research?

What is the point of Academic Freedom if a student can’t ask a question about what is being taught?

Looking over the opinion I think I have spotted why this happened in the first place. The very same reason the French Foreign Legion never had trouble finding recruits. An over abundance of women. Yes, my own fair sex.

Anyone else notice the correspondence by the defendants to Keiran are written as though they are convinced he has to be “handled” and not as one adult to another fully competent adult?

Of course he had to be punished. He did the unforgiveable. He made her look foolish by pointing out her contradictory statements. As others have stated, you are not supposed to question the pronouncements of these race hustlers. Anything they say is by definition correct.

1) So, his deranged misconduct (evident b/c of the post-outbreak, mandatory psych eval) concerns how, rather than what he spoke to his cultural leaders, I mean intersected authorities, I mean medical seniors and teachers? and

2) Were such counterrevolutionary, I mean pedagogically challenging, I mean socially/educationally unacceptable comments provided as notice to all in attendance, ie, expressly prohibited by example in, say, a syllabus for the event, so that any such presenter-issued claim of noncompliant, insubordinate, or interruptive student conduct relative to a questioner’s (determined arbitrarily and declared, and thus not alleged) norm-outlying conduct could be reasonably explained and supported? in case that might be required under broader UVASOM student conduct rules.

Just wondering as we’re all being dragged and stuffed farther and deeper into the most bewildering and bizarre realm of a post-fact-and-reason, post-we-both-used-to-be-informed-and-governed-ourselves-by-enlightenment-values era — wherein Diderot’s demanding doctrine, that “All things must be examined, debated, investigated, without exception or without regard to anyone’s feelings”; ie, that all material is examinable — is surely no longer useful or considered (for the present ambitious purposes of the elite, the superior anti-bourgeoisie).