CNN’s hit parade of horribles for the Trump admin 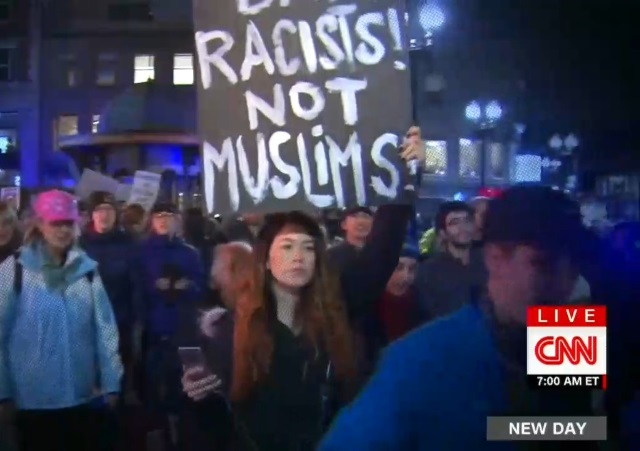 CNN’s 7 a.m. ET hour today began with a news montage. Have a look, and see if you don’t agree that the hit parade of horribles for the Trump administration could just about as easily have been put together by the DNC as by CNN. Here’s what was included:

In virtually any given week during the Obama administration, CNN could have put a similarly negative pastiche. Anyone remember the network doing it?

There was a time when CNN attempted to portray itself as some kind of “neutral” outfit, somewhere in between FOX and MSNBC. Over the last few months, however, it is amazing how angry and bitter they have become – and it’s not so much that they are going leftist, it is more like everyone at every level of that outfit is deeply and personally butthurt at the idea of Donald Trump being President. The last 50 days, especially, their coverage has become little more than a 24/7 political operation designed to denigrate and deligitimize the President, personally.

Still, I strongly suspect the effort is backfiring, just like it did for Hillary. More and more people are just tuning that kind of constant negativity out, and things such as the montage referenced are only seen by the hard core left-wing faithful.

CNN does nothing any more but preach to the Never Trump choir, and that choir is shrinking.

They aren’t tuning negative coverage out. Even though FNC is still the king in viewership, MSNBC is having some of their best ratings periods this year, too. CNN is a distant 3rd. So the difference seems to be more about honesty and perhaps integrity. Now, I’m not saying the personalities and the coverage at MSNBC fit my definition of high integrity. But to those who are looking for their anti-Trump news, I’m guessing they see MSNBC as the “trusted source” for anti-GOP news with a long history.

CNN by contrast has been all over the map. And I wonder if their latest decision to go all in on a public feud with Trump is a deliberate but failing attempt at viewership mostly. People are flocking more to their competitor.

The few times that I glance at MSNBC, no matter who I turn on seems to be leading the “ALL DA WHITE PEOPLES BE RASCIST!!!” cheer.

I don’t doubt their viewership is up, but just because they’ve locked down the paranoic SJW snowflake part of the market. Their fans don’t go their for “news”, what a quaint idea. They go their for Self-Affirmation and a the daily balm that soothes their dirty little souls.

CNN has always tried to present itself as an even-handed news organization. Not at all successfully, though, as the tag “Clinton News Network” goes back to the 1990s.

CNN is a wholly owned subsidiary of the DNC. DNC is bought and paid for by Soros and his ilk.

I’m not a news junky by far. A lot of what I see are clips and snippets from sites like this and especially Newsbusters. But it seems to me that you can hardly name a news outlet or a news division within a broadcast entity, much less other media outlets (like newspapers), that isn’t very sympathetic to every utterance and position from the DNC. Who knows where Soros money flows, however. The tentacles run deep. I doubt some mega-media conglomerates like ABC/Disney need any of his money, but they are still on the side of most of his causes.

The evidence to me is not so much the way the media favored Hillary so much. But in the last year, they circled the wagons and were offering defense for nearly every misstep by the DNC. What little I saw about the Brazille debacle (giving out questions) seemed to be in her defense. Media protecting media, as long as the ideology is correct.

An article quoted on InstaPundit had this little gem in it about an interdepartmental review of the ISIS plan.

“… an adviser to the Trump team told U.S. News, one of many who are familiar with the Islamic State group plan and spoke on the condition of anonymity because they are not allowed to publicly discuss it.”

https://pjmedia.com/instapundit/259642/#respond The original article is in US News.

It seems that the wording for attributions has changed a bit in the Trump era. First, it is “an advisor to the Trump team”, implying that it is his team that is leaking and not someone who could be a holdover from the Obama years.

And then there is this bit – “one of many who are familiar”, implying that finding the leak will be hard.

The potential impact of these types of statements is to encourage the left that there is dissent in the Trump group or there people are still creating chaos in the Administration. And, this can increase any mistrust within the Trump Administration about leakers and divert some people away from their tasks.

“one of many who are familiar”

notamemberofanyorganizedpolicital in reply to Valerie. | March 14, 2017 at 5:50 pm

But no one in their right mind is believing them.

Besides the good book tells us to have nothing to do with
“FAMILIAR” spirits…….

Social justice adventurism, including wars of aggression and elective regime changes, is a first-order cause of Catastrophic Anthropogenic Immigration Reform.

CAIR is also caused by environmental and labor arbitrage, societal responsibility shifts, and people who see dead Soviets in their Water Closet.

Judge people by the “color of their skin” (e.g. [class] diversity), not by the content of their character (e.g. principles).

The Pro-Choice quasi-religion is antithetical and, in fact, incompatible with human rights and [American] civil rights, and the [American] Constitution (e.g. our Posterity, equal treatment).

Obama changed the rules about classified information. Why doesn’t Trump change the rules back. Also it was revealed on Fox News Obama used British intelligence to check into Trump. If true,Trump should publicly blast Obama and give the evidence.