Whether video shows a crime remains to be proven. 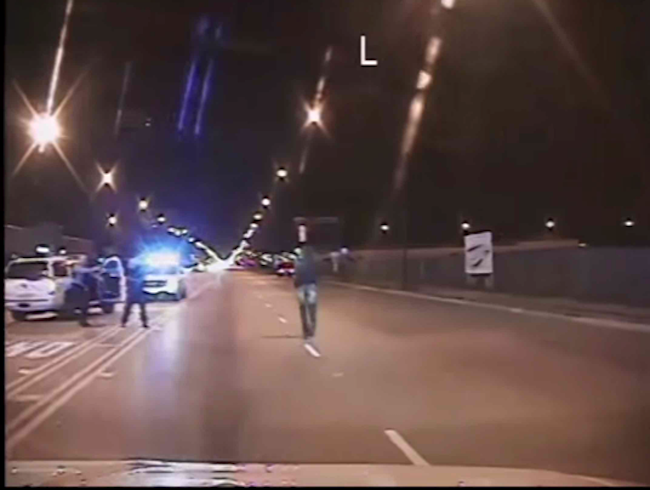 About 13 months ago, on October 20, 2014, Laquan McDonald, a 17-year-old 180-pound black male who was non-compliant with police orders and threatening Chicago police officers with a knife, was shot and killed by officer Jason Van Dyke, a white man.

Yesterday Chicago authorities, under orders from a judge, finally released some dash cam footage of the shooting. Concurrent with that impending release, prosecutors arrested Van Dyke and charged him with first degree murder. He is currently being denied bail.

Here’s the relevant portion of the police dash cam video that captured that shooting:

The release of the video has triggered the kind of hyperbole we’ve long since come to expect. I’m sure we can all recall the Ferguson narrative, later proven utterly false, of Mike Brown being shot dead by Officer Darren Wilson while Brown was on his knees, arms raised in surrender, begging for his life.

And here’s how Yahoo News reported the event:

The clip showed 17-year-old Laquan McDonald, who authorities said was carrying a pocket knife [Ed.: the knife was in McDonald’s hand] and had the hallucinogenic drug PCP in his system, as he was gunned down in the middle of a street on Oct. 20, 2014.

McDonald is seen jogging away from patrol vehicles pursuing him from behind, and then veering off diagonally at a walk as two more officers pull up in a squad car ahead of him.

Two policemen are shown jumping out of their vehicle in the center of the road, and drawing their weapons while advancing toward McDonald, who continues to move away [Ed.: McDonald never takes even a full stride away from the officers.]. Within seconds he is struck by bullets, spins and crumples to the ground, his body jerking as he is hit by additional rounds of gunfire [Ed.: It is not possible to tell from the video if the movements of his body were voluntary or the result of being struck by pistol rounds].

Let’s take a look at the video and the autopsy report and see why this is so.

Before we do, however, it’s also important to provide some tactical context, as it is within this context that the officers made their decision to use deadly force upon the non-compliant and knife-armed McDonald.

There is a sentiment being expressed “by some” that somehow there exists a great disparity in the lethality of a handgun and the lethality of a knife.  In fact, at close quarters a knife is arguably a more lethal instrument than is a gun.

There has also been expressed the notion that because McDonald was not within arm’s reach of the police officers that he represented no imminent deadly threat.  This notion is, of course, the result of ignorance.

I expect every police officer in the country has been taught a defensive doctrine called the Tueller Drill.  The Tueller Drill was developed by Salt Lake City Police Officer Dennis Tueller, who among other things was a firearms instructor for his department.

He recognized that a knife wielder standing beside an officer could surely stab that officer before the officer could clear his pistol from his holster and engage the attacker with fired rounds.

Dennis also recognized, however, that at some greater distance an impact-weapon armed attacker would be too far to constitute an imminent threat to police officer.  Absent an imminent threat, the officer would not be justified in using deadly force upon the attacker.

That begged the question, then, of what distance became the threshold at which an impact-weapon armed attacker did constitute an imminent threat of death or grave bodily harm such that the officer would be justified in using deadly force. Was that distance 5 feet? 10 feet? 15 feet?

Dennis knew a pretty good time for an officer to clear his weapon from his holster and strike a target with two center-mass rounds was about 1.5 seconds.  Once that time is known, the question of interest becomes how great a distance an attacker armed with an impact weapon can cross in that same 1.5 seconds.  Whatever that distance, the aggressor became an imminent threat for self-defense purposes once he crossed that threshold.

After running a great many empirical tests, Dennis found that the distance that an impact-weapon armed attacker could  cross from a standing start in 1.5 seconds was not just 5 feet, or 10 feet, or 15 feet.  Rather, such an aggressor could consistently cross a distance of 21 feet, a full 7 yards, in the 1.5 seconds it would take the typical officer to draw his holster and engage that aggressor with aimed fire.

That suggested that an aggressor armed with an impact weapon becomes an imminent deadly threat even when he was as far away as 21 feet–a distance that astonished even many experienced law enforcement officers.

Here’s a ~1 minute video that illustrates the Tueller Drill in the context of a holstered gun in defense and a knife in attack:

And in case that exercise wasn’t sufficiently convincing on how effective a knife can be against even a prepared and well-armed police officer, here’s a video of an actual confrontation between an aggressive and motivated knife-wielding attacker and several armed police officers, some of whom were armed with long guns. (CAUTION: Not all of these officers survive the encounter, and there’s plenty of blood, so if you’re sensitive to such things you may wish to defer viewing.):

Every police officer who confronted the knife-wielding Laquan McDonald on that Chicago street would have knowledge of the Tueller Drill and thus would have recognized that McDonald was well within range to constitute an imminent deadly threat to the officers.

They would also have been aware, through both training and experience, of how deadly a knife can be even against gun-armed police officers fully prepared for a physical confrontation.

With that in mind, let’s take a look at the dash cam video of the interaction between the Chicago police, especially Officer Van Dyke, and Laquan McDonald.  As you do I want to suggest you keep a few points in mind:

(1) McDonald was brandishing a knife in his right hand as he walked down the middle of the street while facing numerous police officers.  It must be assumed that he was being non-compliant with lawful orders to drop the knife, get on the ground, and the usual law enforcement protocols for such circumstances.  Note that the police have a legal duty to enforce public safety, and cannot simply allow a knife-wielding PCP addict to wander up and down the public streets.  Only one person was making a free choice that evening, and that was McDonald.  He chose, as they say, poorly.

(2) McDonald does not walk directly away from the officers, but rather angles no more than necessary to keep a distance of 10-12 feet (typical width of a car lane) between the officers and himself.   This is well within the 21 foot distance that these officers would have been taught as part of their Tueller Drill training.  At a distance of 10-12 feet the knife armed McDonald could be on the officers stabbing them with his knife in well under a second. Officer Van Dyke would be well aware of both this fact and the grievous injuries that a knife can cause.

(3) The moment before the first shot appears to be fired McDonald is walking down the dashed-white line of the road, thus parallel to the officers, and he suddenly blades his upper body towards the officers. This movement would be consistent with an intent to charge at the officers with his knife.  It is quite possibly this threatening movement, knife still in McDonald’s hand, that induced Van Dyke to begin firing.

(4) Officers are taught to continue firing at a deadly threat until the threat has been neutralized.  Even after McDonald fell to the ground he was still in control of his movements and he still possessed the knife, thus he was still an imminent threat of death or grave bodily harm to any officer who got close enough.

(5) Neither I nor the outraged activists can possibly know, based solely on that dash cam video, whether an officer was close enough to McDonald to be in imminent danger of his knife because the angle of the dash cam changed such as to obscure the entire scene of the incident where the police were located.  An officer could have been within two feet of the still-armed McDonald, perhaps approaching to handcuff the suspect, when the last pistol round was fired at McDonald.  We just don’t know, not from this video.

With that in mind, here’s the relevant portion of the dash cam video once again:

Again, might additional evidence emerge that’s damning to the narrative of justification of Officer Van Dyke? Certainly. And with new evidence, one makes a new analysis.

This video, however, does not in and of itself clearly demonstrate that McDonald was killed in an act of first degree murder by Officer Van Dyke.  Indeed, the video is also completely consistent with a lawful use of force by Van Dyke, in the (as yet unknown) totality of the circumstances.

This remains true, incidentally, with the additional evidence of the autopsy report, which I’ve embedded below.

Bottom line, even the combination of the video and the report do not exclude the possibility that McDonald–on PCP, brandishing a knife, non-compliant with lawful police orders, and turning as if to charge the officers standing

I look forward to more evidence being released in this case.

The Dog That Didn’t Bark in the Night

As an aside I also note the curious sudden statements by Cook County State’s Attorney Anita Alvarez. Yesterday she was citing the dash cam video as dispositive evidence that Officer Van Dyke acted unlawfully.

It is notable that Attorney Alvarez has been the Cook County State’s Attorney since 2008. While the dash cam video showing McDonald’s shooting may be new to the general public, it was certainly accessible to Attorney Alvarez in the immediate aftermath of the shooting, more than a year ago.

Given the political dynamics of any incident in which a white officer shoots a black suspect, especially one who is not yet a legal adult, it is unimaginable that Attorney Alvarez did not bother to look at the dash cam video until yesterday. Assuming she did view the video as long as a year ago, for the past year Alvarez has perceived no reason to bring any criminal charges whatever against Officer Van Dyke.

Until yesterday, when she charged him with 1st degree murder, 13 months after the event.

Things that make you go hmmmm.

Finally, one parting thought. Even assuming the worst of Officer Van Dyke, even assuming that he viciously murdered Laquan McDonald under color of law, I note that the officer has, in fact, been charged with 1st degree murder, and he is being brought to trial to be held to account for his use of deadly force.

The system, in other words, is working.

And here’s the autopsy report, as promised: