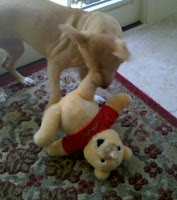 I was going to take tonight off, since tomorrow is Independence Day. But then I saw this column at Newsweek online, Your Dog Isn’t Racist, on the pressing issue of whether a dog can be racist (emphasis mine):

I have a dear friend, one of my oldest, actually, who called me in a bit of a panic: he was worried that one of his two dogs was racist. Apparently, Herman (his name has been changed to protect a potentially innocent canine) barks and shows his teeth when he sees people of color. My friend (white) wanted to know what he should do since Herman’s antics are embarrassing to him. Plus, Richard is petrified that everyone in the world will think he’s an Archie Bunker, since a bigoted dog must be picking up those attitudes from his owner. The bad news is that, yes, folks may think he’s racist.

You’d think the answer would be a simple no, but no:

As it turns out, this isn’t the kind of question that can be easily answered by Wikipedia.

So we will apply modern race theory and Science to the problem, deconstruct the result, reconstruct it, then write about it in Newsweek (emphasis mine):

But here’s the thing—dogs can’t be racist because they’re dogs. To be racist is to harbor a belief that a group of people have abilities or personality traits solely because of the color of their skin. Stereotyping works in a very similar way, but racism is also accompanied with a sense of superiority. The statement “Black people are good at basketball,” is a stereotype. So is: “Asians are good at math.” But “Black people are less intelligent than other races” is racist because it makes a value judgement. Dogs don’t act on belief systems or value judgments and they don’t understand the abundant stereotypes in our society.

Dogs are wonderful creatures, but they simply don’t have the intellectual capacity to develop derogatory judgements about whole groups of people.

I don’t necessarily disagree, in theory, but then there’s the problem of Lola the Alaskan Sled Chihuahua.

You see, Lola hates the Teddy Bear (photo upper right). We didn’t teach her to hate the Teddy Bear, so it was not learned. She also has plenty of other toys, so clearly she has the mental capacity to distinguish between love (her pull toy) and hate (the Teddy Bear).

What do you have to say to that, Ms. Newsweek author?

It is impossible to know what a dog is thinking, despite what all those crazy dog owners say.

That does it. You have gone too far.

I will now teach Lola to attack Newsweek magazines, if I can find someone who has one.

(Video below from the 1982 movie “White Dog,” which apparently never was released to theaters. I can’t imagine why.)
[youtube=http://www.youtube.com/watch?v=ZxslEFlTy4Q]

Don't you remember the Curb Your Enthusiasm episode where Wanda Sykes accused Larry David's dog of being racist? A goof is a goof.

Dogs can't be racist, silly! Only white men can be racist.

I'm surprised nobody has mentioned the feature film based on this theme: Samuel Fuller's White Dog, about trying to retrain a dog previously trained to attack blacks.