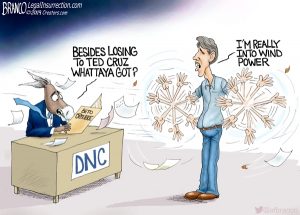 Robert O’Rourke, aka Beto, has no accomplishments other than losing an election to Ted Cruz, A DUI, Hacking computers, being in a punk rock band, and flailing his arms around a lot. Political Cartoon by A.F. Branco ©2019