Student Mob at Canada’s McGill U. Shuts Down Gay Professor’s Talk About Taking the ‘T’ Out of LGBT

Student Mob at Canada’s McGill U. Shuts Down Gay Professor’s Talk About Taking the ‘T’ Out of LGBT 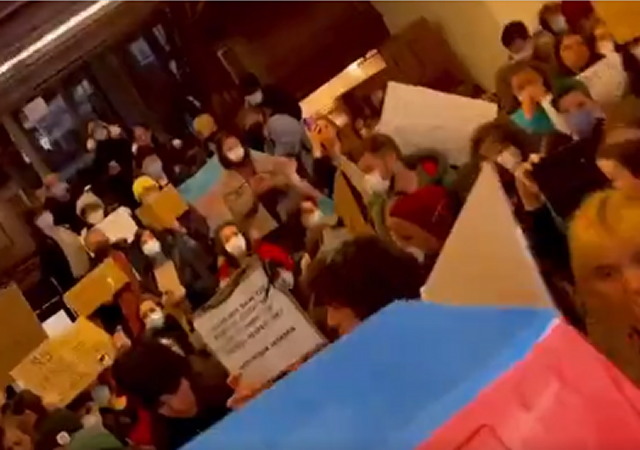 A student mob made up of trans activists and supporters at McGill University in Montreal, Canada, recently shut down a talk by a gay professor.

Robert Wintemute, who teaches human rights law at King’s College London, was at McGill to talk about separating the T (transgender) from LGB (lesbian, gay, bisexual) and to discuss women’s rights in relation to the trans movement.

Trans-rights advocates’ rowdy protest shut down a talk about women’s rights at McGill University on Tuesday given by Robert Wintemute, a professor of human rights law at King’s College London.

His talk at McGill University in Canada titled “The Sex vs. Gender (Identity) Debate In the United Kingdom and the Divorce of LGB from T Event” ended abruptly after about 100 demonstrators “stormed the room … unplugged the projector and threw flour at the speaker, and the walls inside the faculty building were vandalized as well,” reported CTV News Montreal.

Wintemute is also a trustee for a U.K.-based group called LBG Alliance and his speech was aimed in part at discussing biological women’s rights in the wake of the transgender movement’s gains.

But protesters called Wintemute and his talk “transphobic and trans-exclusionary,” CBC reported, quoting Celeste Trianon, a trans activist who led the protest against the event, as saying: “The T (trans) is so much more vulnerable than the rest of LGB. I think there’s tons of scientific evidence speaking to that.”

LBG Alliance tweeted on Wednesday that it’s “disgraceful that an eminent gay professor of human rights law was unable to discuss gay rights. Gay people still have rights, don’t we?”

One of our trustees Rob Wintemute was prevented from speaking at McGill University in Montreal by a baying mob.

Watch the mob in the video below as they chant “Get out!” over and over:

Student protesters, trans rights activists storm McGill University talk on sex vs. gender, shutting it down. They claimed that the speaker, Robert Wintermute, is "notoriously transphobic and trans-exclusionary."pic.twitter.com/nH2d8cF9cf

Many of those students wouldn’t think twice about calling their perceived political opponents fascists.

The CBC has more:

Trans rights advocates stormed into a talk Tuesday afternoon at McGill University led by a speaker associated with a group they say is “notoriously transphobic and trans-exclusionary.”

The talk was ultimately cancelled shortly after it started.

McGill University’s Centre for Human Rights and Legal Pluralism (CHRLP) hosted the event, titled Sex vs. Gender (Identity) Debate In the United Kingdom and the Divorce of LGB from T. It was led by McGill alumnus Robert Wintemute…

“The T (trans) is so much more vulnerable than the rest of LGB. I think there’s tons of scientific evidence speaking to that,” said Celeste Trianon, a trans activist who led the protest against the event.

But Wintemute, the man at the centre of the controversy, maintains he does not promote transphobic views and describes the reaction to his talk as “hysterical.”…

Any discussion or criticism is seen as “hate speech,” he said. The protesters held signs saying “no debate,” he noted, “and many women around the world disagree.” The idea that his seminar would lead to genocide of trans people is “absolutely absurd,” he said.

McGill University has a history of radicalism which we have documented over the years.

In 2017, a McGill student called for “punching Zionists” and faced no real punishment.

In 2020, McGill students demanded that a professor be stripped of emeritus status because he dared to criticize social justice and the Black Lives Matter movement.

“Listen to me NOW or I’ll throw baking soda at you, too!!!”
Uneducated little snots. Two year olds behave better than this.

It’s beyond time to break out the fire hoses and slime cannons.

That or a cane across the jaw.

Up there it is maple syrup and caribou droppings.

Yes they do, after they get spanked a time or two. That’s what needs to happen to these clowns.

Before cleaning my glasses, I read that as “sparked.” Which would work, too.

The end is nigh.

And Louie was Nye.

You date yourself. Try Bill Nye, the science guy.

Louie was funnier. And intended to be so.

If I don’t date myself then I’m home a lot more.

If these “activists” truly believe what they are saying they wouldn’t need to violently shut down a debate. Stalinist Speech Police tactics only come into play when the truth is obvious and uncomfortable.

Leftists labor under the false belief that nothing they find offensive can be true.

Oh, and I wish these “educated” folks would consult a dictionary about the correct meaning of “phobia”.

YES! However, you have to remember who they follow….media and Hollywood. Two very ignorant of definitions groups.

Absolutely. The very etymology of “transphobia” implies that WE are the ones pissing ourselves out of some ill-contrived fear.

The problem is, there are too many groups. They need to just reduce it to two groups.

White heterosexuals (WH) on one side, and Not White Heterosexuals (NWH) on the other side. And since most WHs just want the NWHs to shut up and leave them alone, the NWHs can now concentrate on fighting amongst themselves, and leave the WHs out of it.

Apparently, about as much as conservatives do. Welcome to the fight. You only get fights if you are a preferred minority. You are now out.

We all have rights, some just expect they are entitled to more rights.

I lost track with B. Why both L and G anyway. Just H would do.

Should have never opened that closet.

The LGB crowd would be wise to jettison the TQA+ crowd. The overwhelming majority of people do not want to know what consenting adults do in the privacy of their homes. They simply don’t care, which is what the LGB crowd was pushing for, to be treated like everyone else. Which is a reasonable position in that a commitment to individual liberty would seem to require it, IMO.

The TQA+ crowd rejects that. They don’t want a tolerant indifference from others. Instead they demand a compulsory acceptance and a reordering of society that requires active participation by others in their cosplay.

Now that the paedophile weirdos are also using the LGB crowd to advance their agenda a more vigorous, public pushback from many LGB individuals has belatedly begun.

I’ve been saying this for a while. The LGB group is being dragged down by the TQA+ nonsense. Time to kick the TQA+ to the curb because once society gets sick enough the backlash would hurt everyone. LGB wouldn’t be exempt from the backlash.

Short: More than three = let it be.

Long: movement that is constantly adding letters to its name purporting to represent more and more groups that you’ve never heard of and don’t really have a definition, that organization is operating in the world of fiction, and you should refer to them by three or fewer letters. To continue to stretch with more letters and sometimes character symbols is enabling the illusion that they know what they’re talking about.

This certainly says the quiet part out loud.

I’ve been predicting a split between the L-s and the T-s for a while now.

They cannot co-exist. To espouse Trans is to deny gender, which is fundamental to LGB. Over time these factions will continue to grow farther apart and the LGB will become even more marginalized by the fantasy that is T.

Seems like a lot of theatre for people with no productive uses for their time otherwise.

The LGBs had accomplished what they set out to do, which left the activists with nothing to fundraise over. Both the transsexuals and the pedophiles bring a big influx of cash to the group. Drag Queen Story Hour makes for great video. A guy winning medals in women’s sports generates headlines. Heather has two mommies gets a big “so what?” It’s about raising money.

Can’t the “T” crowd just join in with the group that they really should be allied with, the Mental Health advocates?

Found out what Transmaxxing was yesterday.

I wish I had a time machine to go back to a point where I never heard of the concept.

This is the goose-stepping, brownshirted, Dumb-o-crat stormtrooper-thugs’ veto. The same obnoxious bullying and violent tactics that Muslim supremacists/terrorists engage in, whenever a non-Muslim possesses the temerity to criticize or scrutinize the pathologies that are inherent to the supremacist, totalitarian and belligerent ideology of “Submission.”

The thugs’ goal is plainly to intimidate and silence people who dare to express dissenting views and opinions. It’s despicable behavior.

“shut down a talk by a gay professor.”
Gradually… and then all at once.

That said, lose the Rainbow, albinophobia is an unforced error.