Speaker McCarthy: ‘If You Got the Briefing I got From the FBI, You Wouldn’t Have Eric Swalwell on Any Committee’

Speaker McCarthy: ‘If You Got the Briefing I got From the FBI, You Wouldn’t Have Eric Swalwell on Any Committee’

“He could not get a security clearance in the private sector so would you like to give him a government clearance?” 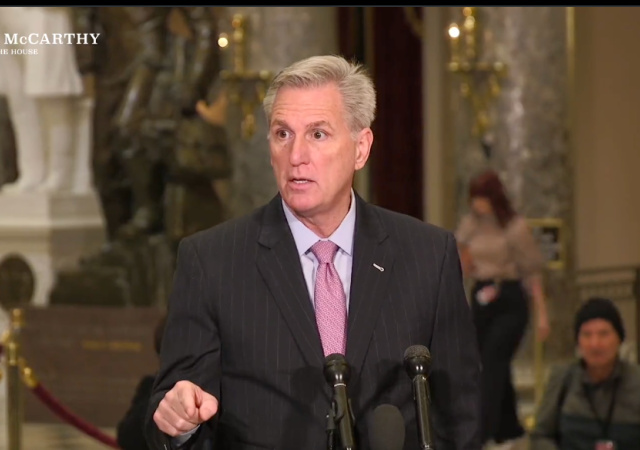 Speaker of the House Kevin McCarthy didn’t hold back when explaining why he doesn’t want Rep. Eric Swalwell on any House committees, especially the Intelligence Committee.

Swalwell cried when McCarthy said he wanted the whiner off the committee.

McCarthy lashed out at reporters for glossing over Swalwell’s intelligence controversies while remaining obsessed with Rep. George Santos (R-NY.)

If you got the briefing I got from the FBI, you wouldn’t have Eric Swalwell on any committee. You’re going to tell me other Democrats couldn’t fill that slot? He could not get a security clearance in the private sector so would you like to give him a government clearance? You ask me questions about Santos. Have you asked me questions about Swalwell? Not only was he getting a clearance, he was inside an intel committee. He had more information than the majority of all the [House] members. Did you ever raise that issue? No. But you should have. You’re going to tell me there aren’t 200 other Democrats that couldn’t fill that slot but they kept him on it? The only way they even knew it came forward is when they nominated him to the Intel Committee and then the FBI came in and told the leadership then “He’s got a problem.” And they kept him on. That jeopardized all of us.

If you got the briefing I got from the FBI, you wouldn't have Eric Swalwell on 𝘢𝘯𝘺 committee. pic.twitter.com/2H19pezF9M

You mean, he’s had relations with known spies?

McCarthy got a briefing from the FBI that barely scratched the surface and he is upset. If he got a briefing that went a little deeper they would have to assassinate him.

Why not release the facts of the briefing??

They probably get those on the condition of secrecy.

After Pelosi and the democrats impeached Trump TWICE (and once when he was OUT of 0ffice) then released his tax returns – and leaked just about every national security secret when it was expedient for them, our nation be damned: who the hell cares about keeping a briefing about a treasonous rat like Swalwell a secret??

– Duh: forgot the release of Trumps taxes! Enough with “secrecy”

We can’t trust the left OR the right button.

If I got a briefing from the FBI…..I would want it in writing, signed by two agents and maybe I might consider believing some of it.

And run by ’50 former intelligence officials’?/

I will add that Swalwell is also extraordinarily stupid. His tweets reveal a pretentious, smirking juvenile intellect of shallow depth.

To borrow an old lawyer joke, it’s the 90% of the members of the House that are just like Swalwell that give the rest a bad name.

Well then Mr. Speaker, act on it — use the ‘Pelosi principle’ and remove Mr. Swalwell from all committees. When the Democrats object, THEN release the FBI briefing (this assumes he has the briefing in writing).

This is a Screaming D leadership problem.

I don’t mind if politicritters are stupid. They picked politics, and mostly had to. Not the brightest bulbs. Nuke-em Swallwell certainly qualifies.

I do mind if they’re energetically stupid and get into real stuff. It’s leadership’s job to keep them corralled, to keep the circus going. They are screwing up like the Feckless R’s lately.

True. If the Dems had the tiniest bit of morals or common sense, they would have given Swalwell the quiet “Get out or get pushed” message years ago. They didn’t, so they don’t. (and this applies to all three nitwits that McCarthy punted off committees, plus a few that have not felt the boot yet.)

He has a safe district, so it isn’t like the D’s would lose the seat.

It’s all about acquiring power, to implement their Vision. Through govt, by seizing control of govt. Contracts with, expectations, wants, n needs of the electorate are just fodder for getting it, to get at the levers.

If you got the briefing I got from the FBI, you wouldn’t have Eric Swalwell on any committee.
Well then, why is he on any committees? Or is this just rhetoric so you can throw the baser Republicans some red meat?

Let’s see what comes of the new Church Committee.
So far, I am pleasantly surprised with McCarthy’s efforts.

Never forget who McCarthy is: the guy who panicked on January 6, and turned on Trump.

Ronald Reagan said the same about George H.W. Bush: he saw him panic under stress and never trusted again.

Isn’t Swalwell the one who said anyone who thinks an AR can protect them from government tyranny is a fool, because the government has nuclear weapons?

A bold statement for a lone tyrant to make.

Yes, and a similar comment was made by Joe (and repeated just yesterday). Remember, these are the same people who claim 1/6 was a “seditious conspiracy” that nearly overthrew the US govt, without employing firearms of any description, and which the government put down with neither nuclear weapons nor F-16s. Logic and consistency are not their strong points.

So says the guy with the F-15s who abandoned Afghanistan to agrarians with AK-47s.

AND left the Afghans HIS F-15s!

Yeah, that F-15 riff deserves its own article — that speech was an embarrassment of riches for take-downs, but let’s start with the weapons of war against your own citizens thing.

So, the point of personal arms is resisting govt’s imposition by force? Like that?

So, we should have bigger bang-bangs; make it at least a fair fight? I want my own Brass Cannon.

Even the Eff Bee Eye thinks having a Chinese spy as your nookie isn’t a good look?

McCarthy feels he can shame journalists by pointing out the bias in their reporting. I’m wondering what planet he’s been on for the past forty Earth cycles orbiting Sol.

Does he think that by calling them out that he’s rallying the troops? (the base.) Because I’m far beyond that point. Time for Speaker McCarthy to climb out of the GOP trench and personally charge the enemy. Hasn’t he a long-planned-out-agenda ready to go? Wtf has he been doing for four years?

They’re so used to Sheriff Pelosi kicking their groins that they actually miss being kicked in the groin. Bah.

You cannot shame people who have no shame.

He’s been watching Kari Lake tapes.
Perhaps someday the horse will even learn to sing.
(Hey — it’s not impossible.)

He’s done a damn sight more than any of his predecessors in the last 20 years.
What exactly are you suggesting?

I don’t think he’s talking to them. He’s talking past them to the viewers . . . and hoping against hope that there are still reasonable Americans who will listen and start asking questions.

The ONLY way enough ignorant Americans will listen and start asking questions will be when the GOP House DELIVERS, not blabs.

The median age in America is 38: the GOP has NEVER DELIVERERED in the lifetimes of most Americans!

“Time for Speaker McCarthy to climb out of the GOP trench and personally charge the enemy….”

Tiki, you’re trying to make a silk purse out of a sow’s ear. It’s not going to happen. McCarthy’s going to be McCarthy. It’ll start showing when the GOPe turns the screws on him.

One hopes the honorable speaker learned over the last couple weeks that he only keeps it position by accommodating the irredeemables enough to keep them on board.

— I don’t care if this guy has a spine, as long as he’s beholden to people who do.

— I don’t care if congresscritters have convictions, as long as we can keep them beholden to their constituencies.

Pseudo-resolve from accommodating the lesser evil, in a good cause if fine with me. People can be very creative doing what they have to, to get what they want.

So as for Swalwell, he got torched by Ted Cruz today on Twitter…

Cruz: How about we bet a Chinese dinner instead?