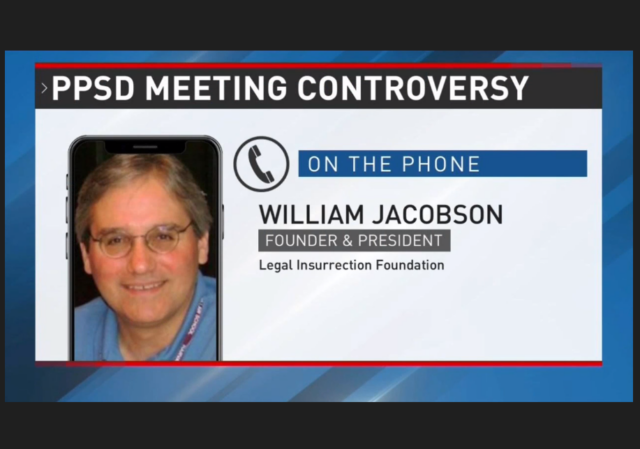 Earlier this week, we also put the spotlight on an “Educators of Color Meet Up” sponsored and organized by PPSD that was only for non-whites and invited only non-whites by the terms of the announcement. In addition, the sign up form listed only non-white races and ethnicities. LIF sent a letter to the original venue, an event room attached to a bowling alley, letting them know about the racially discriminatory PPSD event and putting the venue on notice of the non-discrimination provisions of the Rhode Island Public Accommodations law. You can read the full letter here. 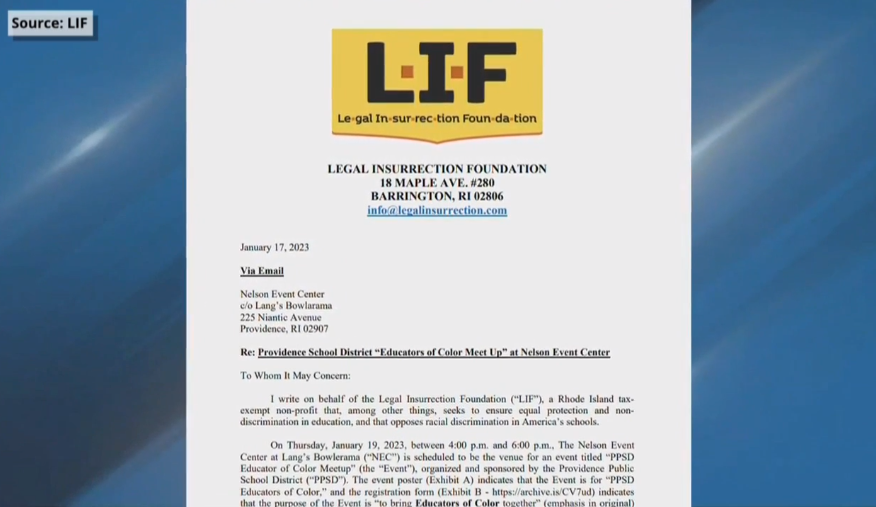 The story was picked up by Fox News and also we published the details, including how PPSD backtracked, changed location, and changed its sign up form and event description after being exposed, Segregated Providence (RI) Teacher Event Open Only to “Educators of Color” Challenged By Legal Insurrection Foundation.

I had a chance to discuss the issues on the Matt Allen Show, which airs from 12-3 on WPRO, one of the major Providence radio stations. In the interview, among other things, I explained how PPSD’s claims that this was just a sign up form mistake were not accurate, that the problems with the event persisted, and that someone in state government needs to monitor the systemic “equity” racial discrimination in the Providence schools’ DEI programming.

I pointed out the the original venue in particular was something of a victim here, because it probably didn’t realize when it booked the room to PPSD that the event was being promoted on a segregated basis. We don’t know why the event was moved, perhaps the bowling alley didn’t appreciate being put in this position.

… this is a Providence Public School’s problem. And it’s not the only problem they have, they have the teacher loan forgiveness. And we’ve received tips about other problems that we haven’t gone public with. Of course, we always investigate things before we just write letters. But Providence has a problem with their DEI programming and it’s not enough for them to say, well, we are in favor of diversity. Well. that’s fine. Nobody’s saying that’s bad. In fact, that’s Rhode Island state policy. But you have to do it lawfully and you cannot achieve diversity through racial discrimination. You have to find a better way to do it. And that’s the message that for some reason hasn’t gotten through to the Providence Schools.”

A meeting for Providence Public School District teachers Thursday came under scrutiny this week, after a local legal watchdog group claimed it discriminated against white educators.

Earlier this week, the Barrington-based Legal Insurrection Foundation, or LIF, wrote a letter informing the Nelson Event Center in Cranston that it believed the PPSD event the location was set to host Thursday discriminated against race. According to PPSD’s Facebook page, the event was called “PPSD Educators of Color Meet Up.”

“Because the Nelson Center is a place of public accommodation as a matter of Rhode Island law, they are not permitted to discriminate,” argued LIF founder and president William Jacobson. “This is an event that was segregationist in the way it was formulated by a government entity. We believe that violated the law and we put the Nelson Center on notice.”

Has PPSD learned any lessons? Unlikely. So expect more reports.

Well, this answer my question about why the venue went from a event center to a nutrition cafe. After receiving that letter on the 17th, the original event center now probably has garlic and crosses nailed around each entrance.

Florida passed a law that removes immunity from local boards that violate State preemption laws. The case was about firearms.
I wonder if the same could be used for CRT.
Even though there are Federal laws, could the State remove a school boards immunity as an example.

Yes. Except in states where the constitution says otherwise, school districts, as well as counties and cities, are created by the state legislature, so it decides what powers they have, and whether their board members / legislators / whatever should have immunity, and if so how much. They have no rights at all against the legislature (again, unless the state constitution gives them such rights).

And it’s doubtful how many state constitutions even have provisions for immunity, given that it was created as a doctrine out of whole cloth by the Supreme Court within my adult lifetime.

Not true. You are thinking of qualified immunity for cops and public servants. We are talking about legislative immunity, which, for US congressmen, is in the US constitution. State constitutions often do the same thing for state legislators. Those state constitutions that recognize such things as counties and cities may extend immunity to their legislators too. Or not, as their framers chose.

You’re right. There are about six classes of immunity, and some of them are very old.

“could the State remove a school boards immunity as an example.”
*****
When I worked at a State University, it was made clear that the University would defend law suits as long as the alleged legal issue didn’t involve malice, was illegal or violated University policies and procedures. If those and possibly other circumstances were found then I would likely be on my one for legal costs, etc. Be interesting to inquire what, if any limitations there are for RI school board and school officials.

Remind them that they are in the wrong.

Visible resistance and wins – however small – inspires others and keeps their noses a little bloodied.

A ‘mistake’ was made. Funny how mistakes happen in one direction.

I especially approve the deliberate use of the word segregationist. It’s always useful to remind the d/prog and the general public that the democrat party and their allies have been counting, sorting, rewarding and punishing by skin color since their inception.

Great work as always, Professor Jacobson. Thank you for your efforts in combating Leftist racism, lawlessness and totalitarianism.

I ran for state representative for Providence in 2016. While knocking on doors, I was given a broad education by moms on how they feared having to send their children to a Providence public school. Aside from the violence and lack of control, the moms feared their children wouldn’t be coming home with an elevated knowledge of the abc’s and the 123’s.

Providence was, is and ever shall be, a septic tank of waste that no amount of tanker trucks will be able to empty.

Just WTF makes these people think they can get away with this crap? What actions can be taken to ensure that they never again attempt to do such things? Are these individuals elected to their positions or are they appointed by some all-knowing individual or board and is there a way to hold those responsible to account for their ILLEGAL behavior?

School boards in most places (including RI but not including NYC) are elected.

They operate on the premise that no one will notice or go public, exposing their behavior. The LIF is one of far too few groups who are tracking and exposing their behavior. In reality this country needs an army of LIF’ type organizations spread across the country, it also helps to have a leader in the vein of Bill leading the fight. who has been proven right time after time.

Also requires local Citizens to get busy, roll up their sleeves and get to work once they have been informed by LI and others about the activities of their local school boards and legislators. We can lead the horse to water…

What makes them think that? Arrogance, confidence, moral certainty (misplaced).

White males need not apply to the Early Stage Business Boot Camp at the eFactory at Missouri State University. https://efactory.missouristate.edu/early-stage-boot-camp/

It seems unlikely that the politically correct left will learn anything from getting caught in these circumstances violating our non-discrimination laws and engaging in reverse discrimination. Likely they will continue doing these race based actions until they are caught and incur real consequences like incurring personal liability or having board members removed from office.