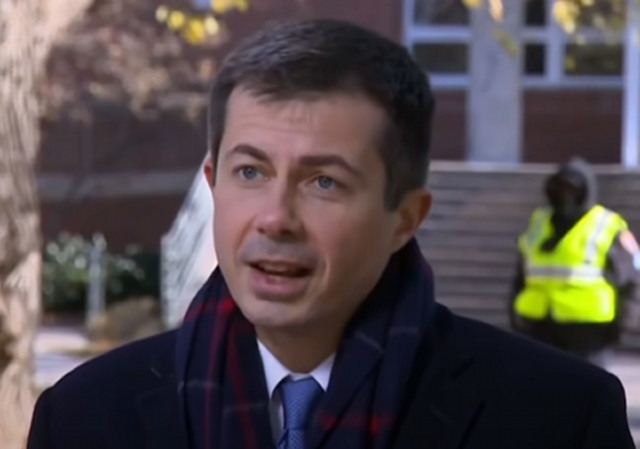 Pete Buttigieg’s performance as Biden’s transportation secretary is coming under increased scrutiny. He seems to be absent whenever some major problem is unfolding.

According to FOIA documents, when Buttigieg was on paternity leave during the supply chain crisis, he was avoiding calls, meetings, and public appearances.

Transportation Secretary Pete Buttigieg avoided some phone calls and requests for public appearances while he was on paternity leave in 2021, according to internal documents obtained through the Freedom of Information Act.

Documents obtained by the group Protect the Public’s Trust show Buttigieg declined a request for a call with Sen. Chuck Grassley, R-Iowa, in September 2021 to discuss an application for funds toward a bridge in his state.

“Unfortunately, the Secretary is currently on leave due to the birth of his twins, and that may lead to a delay in possibly scheduling in the future,” a staffer emailed Grassley’s office, according to documents obtained in the FOIA request.

Buttigieg similarly declined to participate in an hour-long Zoom call for an event with the Indiana Chamber of Commerce that invited him to speak.

“I think we can delegate? Can say he’s on leave,” one staffer emailed internally.

“Sounds good will do,” another staffer responded.

Buttigeig was also invited to travel to Illinois to visit the opening of a bridge, but again declined.

“The Secretary is currently out on paternity leave therefore he is unable to travel at this time,” the staffer replied in October 2021.

The Washington Examiner reminds us that Buttigieg claimed he would be available 24/7:

Scandal-ridden Pete Buttigieg skirted a meeting request from a top Republican while on paid paternity leave, even though the transportation secretary claimed he’d be on the clock “24/7” during this controversial period, emails show.

Buttigieg, who came under fire for taking paternity leave in August 2021 amid the supply chain crisis, reassured CNN’s Jake Tapper in October 2021 he was “available 24/7” because of the “nature of my job.” However, the DOT rebuffed the idea of him meeting with Sen. Chuck Grassley (R-IA) roughly one month before that interview, claiming Buttigieg was unavailable due to his leave status, according to emails obtained by the watchdog Protect the Public’s Trust and shared with the Washington Examiner.

“Senator Grassley would like to speak to Secretary Buttigieg about the status of a Buy American Waiver Request for the I-74 bridge,” wrote Grassley’s scheduling director, Jennifer Heins, to the DOT on Sept. 20, 2021. “Can we set up a phone call please?”

The senator sought to discuss with Buttigieg an estimated $1.2 billion construction project in relation to a bridge that crosses the Mississippi River and connects Iowa to Illinois.

People are starting to note that Buttigieg may not be qualified for this position.

He thought he could succeed just by showing up, and it would set him up for whatever political office he wanted next.

Reality has set in, and shown us Buttigieg is woefully inexperienced. He needs to go. https://t.co/L7SBsIpdJZ

Diversity hire is a no work job silly, it’s to fill out the administration’s check list and not to really do any work.

Platitude Pete was a token hire, just like Kamala was. His only “qualification” was his homosexuality.

Pete B was on “paternity leave'” without his fashionable wardrobe hence no public appearances.

“He seems to be absent whenever some major problem is unfolding.”

But always “present” to cash the pay check.

Not only was he just loafing off on MULTIPLE vacations on his alleged ‘paternity’ leave, BUT HE TOOK FAR MORE TIME THAN ACTUAL MOTHERS GET AFTER HAVING AN ACTUAL BABY THEMSELVES.

Hey, it’s hard work being a sperm donor – if he even was that.

Duel sperm donors ?
Still waiting for the first male to actually birth a baby, sure the evil doctors are working on it

And if there was a real black man in congress, instead of the pansy assed, tit sucking, ass kissing, money grubbing politicians we now have, they would be speaking out.

“FAR MORE TIME THAN ACTUAL MOTHERS GET AFTER HAVING AN ACTUAL BABY THEMSELVES.”

Hey, let’s be fair. Is that also true of actual mothers who have cushy, elite Cabinet positions?
Of course, first you’d have to find one of those who was still of childbearing age.
Who’s closest, Gina Raimondo? Still way out of the ballpark…

Equality is about treating people equally so where Maternity leave is offered then why not equivalent Paternity leave? Either we, as a society, want equality and support the implementation of equal access or we do not.

The bigger issue is why is so much leave available for a federal employee. That’s a long time for leave without a medical situation.

It WASN’T. That’s the point. There was no ‘leave’ he was on. Even if he had been ON maternity leave, he took FAR more than the actual authorized amount.

He was literally just blowing off his job and vacationing around the world while collecting a cushy salary.

Federal employees are authorized 12 weeks of leave (paid leave) following the birth of a child or the placement of an adopted child.

“The bigger issue is why is so much leave available for a federal employee. ”

That’s because the government has more money than they know what to do with.

Slight correction; the federal govt SPENDS more money than they know what to do with. If they actually had the money they spent we wouldn’t have a budget deficit or a National debt.

I expect nothing better from the kind of bottom-of-the-barrel trash that will work for a pedophile like Biden.

This guy is such a f—king moron: a complete poser, and poster-boy for the dangers of affirmative action.

“The Washington Examiner reminds us that Buttigieg claimed he would be available 24/7.”
He was always available… to tell people no.
Whut?

How do you do that as Sec. Trans.? Cut ribbons, make simple stuff work, go around the country and shake hands, collect lots and lots of political favors, and behind the scenes build your political machine. It’s not a marquee position and you won’t be in the news every day, but that’s fine — you’re planning for the future.

But the one thing you DON’T do is screw-up the basics of the job. You do have to show up, listen to the briefings, and understand the implications of the ports closing, the rail workers walking out, or the FAA glitching. He didn’t do any of that. As the joke goes at Instapundit, he’s so bad at the things he’s touched that the country actually knows who the Sec. Trans. is.

Mr. Buttigieg is that clueless — he thought he could go to the DoT, nurse his babies, change all the pronouns, and take vacations, and DoT would magically run itself. It doesn’t, and now his presidential ambitions are hosed.

He’s worse at positioning himself than Dan Quayle ever was.

He’ll be kamtoes VP when Biden is forced to leave

He would adopt some more kids and after taking an adequate amount of paternity leave we would see him again some time around 2035.

See, now that’s how people get confused. He meant he’d be taking his salary 24/7, not that he’d be actually doing any work. He’s a bureaucrat, after all. They can’t be expected to actually work.

Ah, so “on the clock” as in punching in / punching out.

He is like the roaches at the roach motel. They check in but don’t check out.

Pete Buttigieg, like Hillary Clinton, thinks that a Cabinet position is just a resume filler between runs for electoral office. Neither one of them have any clue that they are actually supposed to show up and do something.

If you’re McKinsey & Co. aren’t you embarrassed this guy has you on his resume?

So, he’s auditioning to president in the Barry-O style.