“It is very clear that the NY Times would never target another minority group in this fashion, certainly not at a time when that same minority is being targeted for hate crimes like no other on the streets of the city,” says Rabbi Yaakov Menken. 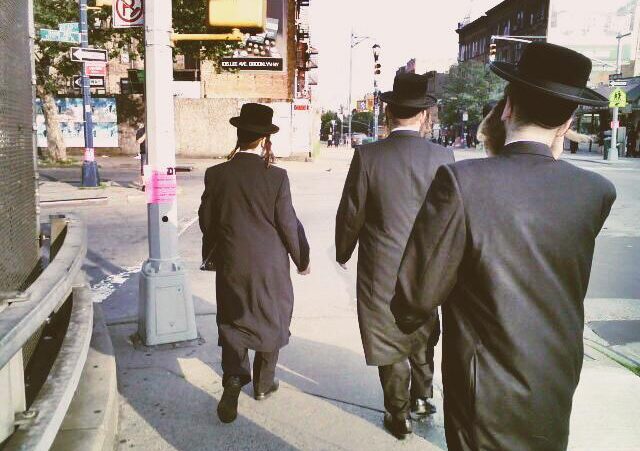 Orthodox Jews were a trending topic on Twitter last week. Their ranking was boosted by a one-two punch from the press — hit pieces against the religious Jewish community from both the New York Times and the Washington Post.

The hostile coverage comes amidst growing alarm over anti-Semitic hate crimes in the city, overwhelmingly affecting Orthodox Jews and Hasidim. 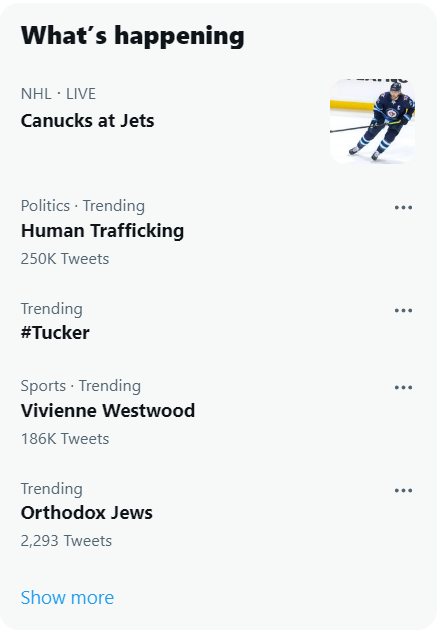 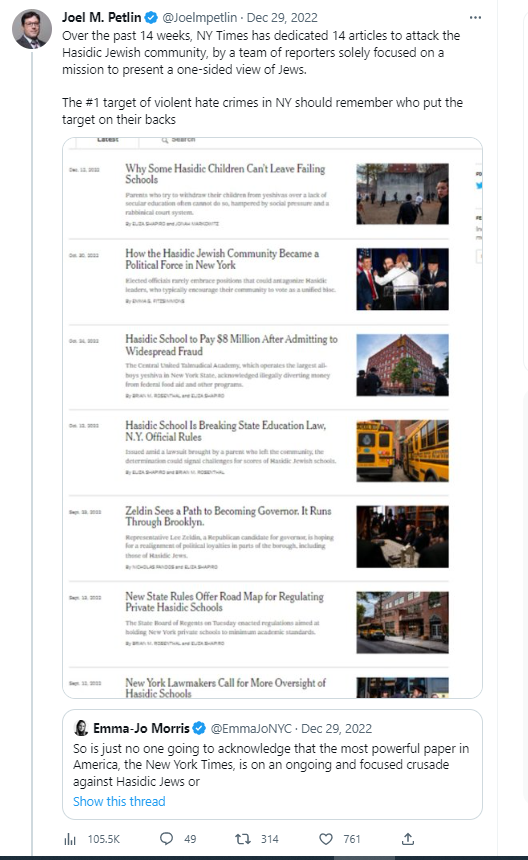 The Times piece was yet another attack on Hasidic schools—we covered one in September here—this time about the administration of special education services.

And the Washington Post revived the medieval Jews-are-vectors-of contagion libel by featuring pictures of New York Hasidim — in an article mainly about disease outbreaks in Ohio and elsewhere. 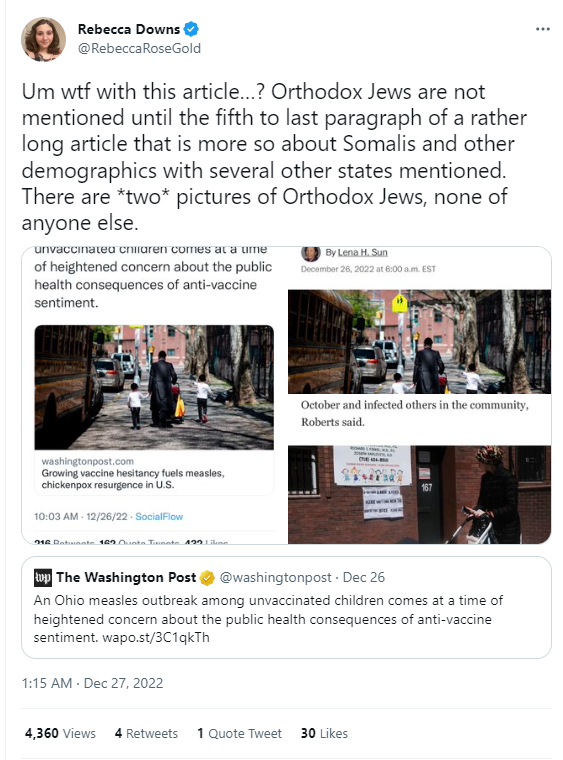 The media onslaughts are brought to us by the same people who fret over the potential for violence incited by “problematic” “hate speech” on Twitter now that Elon Musk took over.  But their campaign shows no signs of stopping, even in the wake of a dramatic surge in actual violence against the New York Orthodox Jewish community targeted by the media. 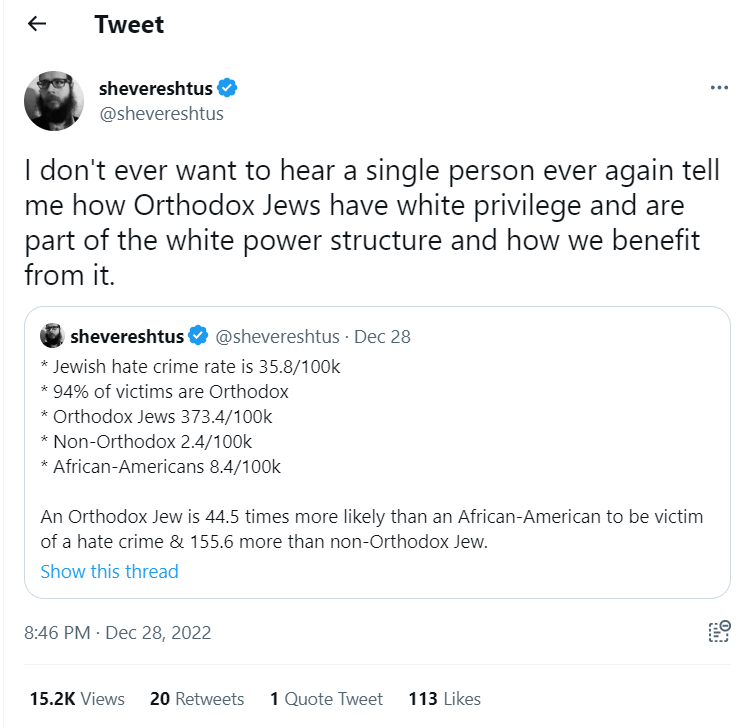 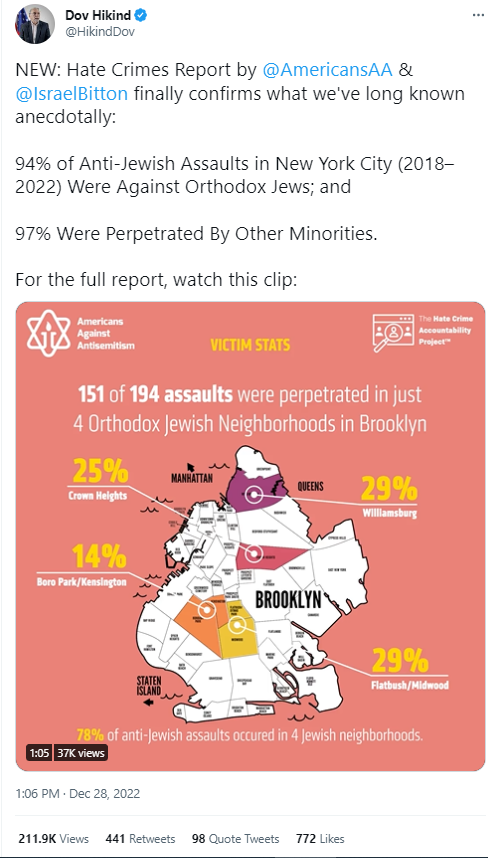 Jewish advocacy groups have had enough and are hitting back. The newly formed KnowUs.org, a project of the Agudath Israel of America, has launched a billboard campaign against the Times‘s attacks on the religious community: 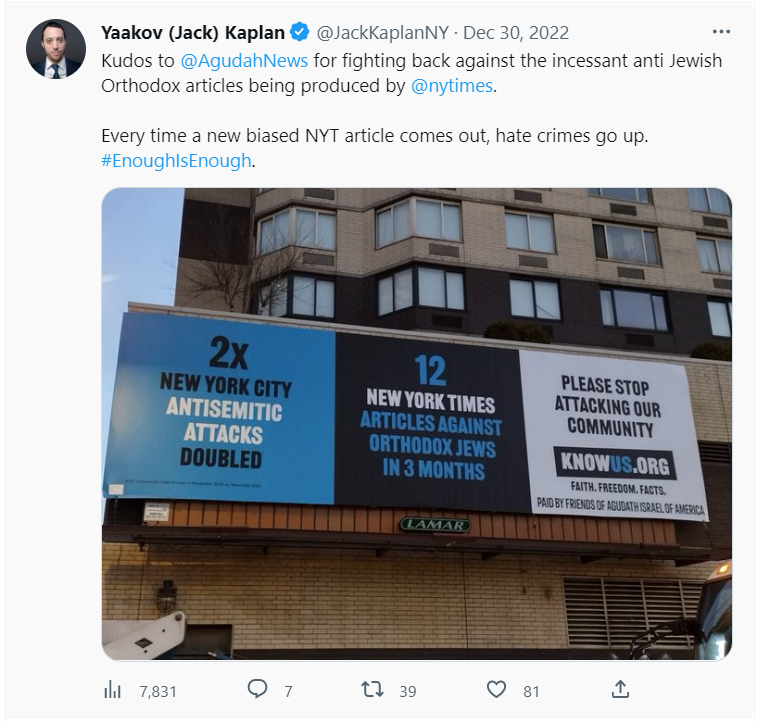 Of course, the correlation between the serial hit pieces and the surge in hate crimes doesn’t necessarily prove causation. But by now the paper’s readers have gotten the message: bigotry gets a free pass when its target is Orthodox Jews.

And considering its history of covering up the Holocaust, the New York Times has a lot to apologize for.

Rabbi Yaakov Menken, managing director of the Coalition for Jewish Values, takes the Times to task for the timing of its attacks: “It is very clear that the NY Times would never target another minority group in this fashion, certainly not at a time when that same minority is being targeted for hate crimes like no other on the streets of the city,” he says. “No one can read, or subscribe, much less work for the NY Times, and wonder how Der Sturmer became so popular in Germany.”

No surprise. NYT is owned by the safe family that kept quiet about the nazis and their treatment of Jews while quietly trying to get their own family out of there.

And yet, the publisher and/or Chairman during almost all those years was one or another Sulzberger family member. This has always blown my mind.

because the Sulzbergers are no longer Jewish. In fact the current owner would pass as an Aryan in Hitler’s Germany

If they were trying to get their family out, then that would excuse their papering over what was happening. But I’m not aware of that being the case. Do you have a source for it? As far as I know the Sulzbergers, who were already Episcopalian but at the time were still technically Jews, covered up for the Nazis at first because their local correspondent was a Nazi sympathizer, and later because they thought what was happening to a small minority was not newsworthy, or some such thing.

Gah, my typing sucks. That’s the SAME family that appeased the nazis while trhying to get their own family out.

How many Jews still subscribe to the Times? How many still buy ad space in the Times?

Grizz, greetings. I’m failing to understand the point that you’re attempting make. Okay, so, the majority of American Jews lean Dumb-o-crat. As do the majority of Christians, I’d submit. Orthodox Jews generally lean GOP, as do more devout Christians. But, irrespective of voting loyalties, the Times’ conduct here is despicable and worthy of condemnation.

I’m certainly not referring to the Orthodox. (Not my downtick. I see your point.)

I didn’t downtick you either but I suggest that your claim that a majority of Christians lean Dem is what brought it on.

Isn’t this another instance of the left (NYT and WaPo) eating their own?

I don’t think the times, or the post see orthodox Jews, as being their own. So no in this case, they’re not eating the wrong. They’re lashing out at what they see as an enemy.

Their own?! In what way are these people their own? What do they have in common? Politically they vote strategically but their sympathies are with the right. Their values are certainly those of the right, and in the last few elections they overwhelmingly voted Republican.

As for Jews in general, neither newspaper is owned by Jews, so why would they see Jews as their own?

Most American Jews seem unable to comprehend that the leftist media and leftist politicians are not their friends. They continue to vote for leftist Democrats, and they support leftist media like NYT and WaPo even when they keep getting thrown to the curb. When will they wake up and see that conservatives are their natural allies?

Trump, with his Jewish children and grandchildren, is the closest we’ve ever had to a Jewish president. Benjamin Netanyahu saw Trump as a strong ally, but American Jews seem to be enthralled by the Democrats’ progressive policies, even while they treat Israel and Jews shabbily.

Avi Natan,
I’ve commented before: We wish we could disconnect them like a gangrened limb.

Unfortunately, we are stuck with a majority who are Jewish in name only and still attached to us. The Talmud (Sotah 37, I think) describes the relationship: All Israel are co-signers to each other.

Man, I am not comfortable being a co-signer to such a credit-unworthy community!

Could straighten this out if we had substantially more white perps.

I would never advocate forcing people to change decent habitual garb, whiehter Chasidic or Plain. But methinks that Chasidic garb tends to make them easy targets for the nasties out there–for which I blame the perps, not the Chasidim.

On this day in history, Jan. 2, 1920, thousands detained by DOJ in nationwide ‘Palmer Raids’

“There is no time to waste on hairsplitting over infringement of liberties,” wrote The Washington Post on Jan. 4.

“Even simple criticism of the government was enough to send you to jail,” according to Christopher Finan, author of the 2007 book “From the Palmer Raids to the Patriot Act: A History of the Fight for Free Speech in America.”