EU Border Agency Frontex: “Women accounted for fewer than one in ten of the detections.” 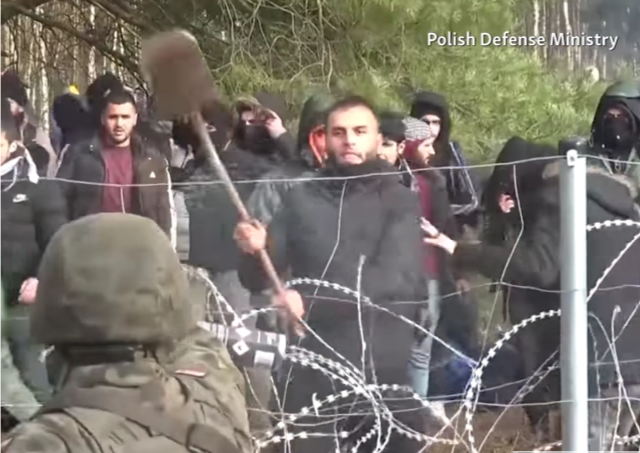 Six years after its massive migrant crisis, Europe is once again in the midst of another wave of illegal mass migration. Last year, the number of illegal border crossings into Europe reached a six-year high, the EU border agency Frontex disclosed Friday.

“In 2022, around 330 000 irregular border crossings were detected at EU’s external border, according to preliminary calculations. This is the highest number since 2016 and an increase of 64% from the previous year,” the EU border agency revealed in a press release.

Not surprisingly, the majority of these illegal migrants into Europe come from Muslim countries such as Afghanistan, Bangladesh, Egypt, and Syria, the EU border agency’s data suggests. More then 90 percent of illegal immigrants are apparently men. “Women accounted for fewer than one in ten of the detections,” the agency disclosed.

These refugee numbers don’t include millions of displace Ukrainians who crossed into western Europe after Russia invaded the country 11 months ago.

The number of attempts by migrants to enter the European Union without authorization reached around 330,000 last year, the highest number since 2016, the EU’s border and coast guard agency said Friday.

Almost half of the 2022 attempts were made over land through the Western Balkans region, EU agency Frontex said, according to its “preliminary calculations.” Regardless of entry route, Syrians, Afghans and Tunisians together accounted for roughly 47% of the attempted border crossings.

Men accounted for more than 80% of the attempts to get in, Frontex said. The agency calculates entry attempts rather than the number of people trying to get into Europe, because it’s often difficult to identify migrants, who routinely travel without passports, and some may try to enter multiple times.

Frontex’s latest figures didn’t include almost 13 million Ukrainian refugees who were counted at the EU’s external borders between February and December. Special emergency measures were introduced to ease their entry and help find them accommodation, training and short-term jobs. (…)

Egyptians, Tunisians and Bangladeshis tried in the greatest number. The agency said that 2022 saw the most people in five years arrive from Libya, the main departure point in northern Africa. The number of people leaving Tunisia hit the highest level in recent history.

In the autumn of 2015, more than a million migrants, overwhelmingly young men from Muslim-majority countries of North Africa and the Middle East, swarmed Europe’s border after German Chancellor Angela Merkel opened her country to illegal immigration. Europe, mainly Germany, France, and Britain, witnessed a spate of Islamic terror attacks and a surge in violent migrant crimes since the 2015 influx.

Germany is still coping with the aftershocks of Merkel’s disastrous decision. On this New Year’s Eve, migrant gangs fought pitched street battles with German police, firefighters and first responders in Berlin, Munich, and cities across the country. In Berlin, masked men in migrant-majority areas erected road blocs and set them on fire. At least 15 policemen and 18 firefighters were injured in the rioting, German media reports say.

Having learned nothing, the globalist organizations are doubling down on their policy of mass migration. The United Nations, which has been spearheading this agenda, urged European countries to open their borders to illegal migrants. “Migration has to be managed, not by closing borders, but by opening legal channels,” the UN migration agency chief Antonio Vitorino demanded last month.

Europe has been invaded and occupied several times by armies a lot smaller than this. This time it looks like it might stick.

We are even worse

Do these rich white whore elites really think this won’t effect them or their children?
My guess they are ok with being at the end of the BeHeadings

If the masses of citizens all over the world do not unite and fight their governments amd fortify our boarders, we are all lost

“My guess they are ok with being at the end of the BeHeadings”
It’s up to us to ensure this doesn’t happen.

From the photo at there top of this, a reminder: these aren’t migrants, they are scouts and the advance wave.

That’s what I was thinking

They have shovels in their hands.. they need to Be shot if they try to get through
It’s what we need to do also

Otherwise it will never stop

Maybe DeSantis can
Bis them
To Davis?

Now there an idea

“Migration has to be managed, not by closing borders, but by opening legal channels,” the UN migration agency chief Antonio Vitorino demanded last month.

… or he’ll glue himself to a painting? What, exactly is the authoritah for his “demand?”

“Migration has to be…” is a conclusion. Ok, why does it have to be done this way? Or else what, if not done this way — besides the implicit extortionate threat that The Usless Nations would … write a sternly-worded letter? What additional bad happens if “migration” is not handled the way this guy proclaimed?

Maybe there’s a better hack, than The One Thing. There are always alternatives, like, just as a random hypothetical off the top of my head, if gas leaking from stoves while they’re off is a problem, maybe upticking the valves and their installation would be useful. If you just have to mandate something, maybe mandate that. It’s as if banning stuff people like is the point, the way they always jump on “Ban All the Things!”
Are “root causes” of migration on the table? The current US administration made a bunch of noise about addressing the “root causes” of Central American migration. They even dispatched The VP of Many Portfolios, who gave some speeches about, net, imposing improvements on the besotted places people are fleeing from, so they won’t come the US. That take — By The Administration, Out Loud, On Film — is wrong about six ways, starting with: “Imperialism, much>”

Was Brandon heard to say? “330,000 – BFD. Europe has more than double USA population and this number is a little more that 1/10 of what I think is good for us each and every year.”