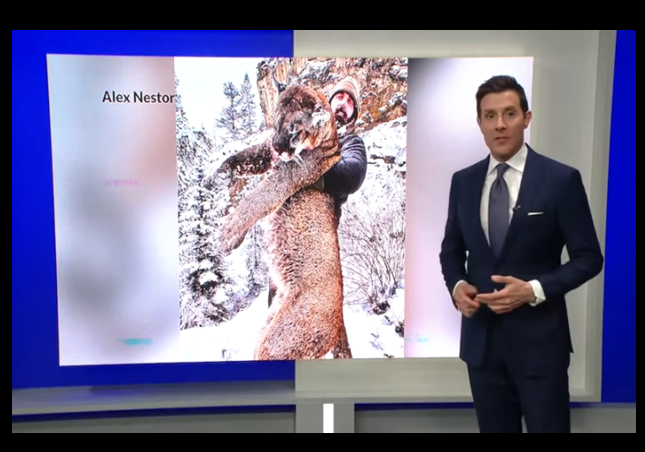 In a 2015 hunting report discussion, I noted that  California banned mountain lion hunting through a voter initiative in 1990. As described in a book that tackles this topic (“The Beast in the Garden”), these big cats gradually became habituated to humans.

I follow reports of mountain lion encounters closely, especially as there have been encounters reported near the area in which I live. Therefore, after having taken up archery last year, the news that former NFL player Derek Wolfe successfully brought down a big male with a bow and arrow caught my interest.

NFL players are widely regarded as tough, but former defensive lineman Derek Wolfe showed just how fearless he is after he received a call asking if he wanted to stalk a mountain lion that was “wreaking havoc” in a Colorado neighborhood. Wolfe grabbed his bow and arrow and agreed to go find and eventually kill it.

“Late Tuesday night I got a call from @huntnest to see if I wanted to stalk a giant Tom (male mountain lion) who has been wreaking havoc in a rural neighborhood,” Wolfe wrote on Instagram. “He had already killed two of her dogs and was living under her porch, nervous what he might do next.”

Wolfe, who played eight seasons with the Denver Broncos and helped the team win Super Bowl 50, said that during his search he found a fresh mule deer the mountain lion had just killed. Wolfe admitted the experience was an exhausting one.

Derek Wolfe shot (bow and arrow) a massive mountain lion that was eating local pet dogs.
He is a former DE for Denver.
32. 6ft5. 285.

Take a look at the size of this thing. pic.twitter.com/ihKUQAzSDi

The hunt was legal.

Colorado Parks and Wildlife told the Denver Post Friday that Wolfe is a licensed hunter and is in good standing. The legal kill was reported to CPW and falls within mountain lion hunting season, which runs from Nov. 28, 2022, to March 31, 2023.

The hunt was intense.

Wolfe said he hiked over 9,600 feet before finally finding the big cat. Once he found it, he took out his weapon and killed the lion.

“Exhausted, dehydrated, cramping I drew back my [bow] and sent an [arrow] through him,” Wolfe wrote. “Then I had to crawl backwards down the mountain with him to get him to the truck.”

There were the usual complaints from the environmental activists and PETA’s minions. However, many recognized the talent and skill in taking down this animal with a bow and arrow.

I want to focus on the positive comments, as it is quite possible this animal could have scaled up next to hunting small children.

https://t.co/ADil1OFsmR Here is the reason the community will be safer now.

For those who are complaining about Wolfe’s actions, perhaps a call to Colorado’s Parks and Wildlife would be in order…so the agency can explain why it ignored all the complaints about disappearing dogs and concerns expressed by the taxpayers in the impacted community. That’s the department that should have seen to relocating the cat.

Wolfe did the job the eco-activist bureaucrats chose not to do.

Thank you Derek Wolfe….what a great shot. I am going to double down on those archery lessons.

Up close and personal….. under 40 yards with nature’s “switch blade” killer to get the job done.

Most impressive that this guy was able to do that — or anything, really — with such a harmless implement.

I have been reliably informed that the only risk of harm we need attend to is from those full-semi-automatic, automated death machines with high-capacity clipazines and those folding things that go up.

Curiously, hunting arrows are surprisingly effective against Kevlar.
The More You Know.

…but how do they do against nukes from F-15s?

That is a MONSTER mountain lion. With a bow and without the use of dogs to tree it, is pretty amazing.

Holy cow that animal is huge!

I do wonder how Minuteman Joe’s double-barrel shotgun would do vs. one of those critters. I have been reliably informed that that’s all you would ever need.

Interesting how “hunting” blends into “self protection” on this one. It’s like personal ability has a spectrum of uses. (Can I say “spectrum?” Rainbow. Ok, “rainbow of uses.”) It’s like ability is a kind of agency, including the personal agency of deciding when and how to use it.

It ain’t about the weapon; it’s about the agency. Double-barrel Joe, there is Ok, barely, with you being able to scare folks off with a bang, bang. He’s not Ok with you having the ability to do something effective, or having the choice of what you do.

Who are you to decide? C’mon man.

Yeah, scary big. Look at the size of it’s head (and jaws)!

Here in the central Texas Hill Country we have bobcats which can be scary critters themselves. But this thing, it was a monster. It was preying on domesticated animals… probably just a matter of time before it came across little Billy and Suzy taking Snoopy for a walk through the woods….

We have cougars where I live. This one looks like a pretty typical full-grown adult male. They are very impressive animals.

The Usual Suspects are complaining for the usual reasons: casts a poor light their Gaia worship, and distant authoritah

The last thing they want is you able, and doing things on your own behalf, or friends n neighbors, double-plus-not when they’ve declared that Nothing Can Be Done. No agency for you!

We catch them on the security cameras 1-2x a year – usually following the scent of deer when they’re on the move. The neighbor videoed one that had wounded a racoon that briefly escaped to their front porch, where the cougar found it hiding behind a large potted plant.

None we’ve filmed are as big or grizzled as the one in the pic above. A few years ago one stalked a couple girls hiking along the Dungeness river. Asked by a local reporter one of the teens said it was “making cougar-y noises” …

Rifle hunts of deer and turkey are difficult, at times, but even a beginner can be rewarded with a good kill.

Bow hunting is a whole ‘nother animal because close proximity is essential. If the hunter is detected, deer and turkey simply run away. Big cats will turn and kill you.

That cat is a monster. Mountain lions are no joke and that cat appears way out of the ordinary. No bow hunting predators for me thanks.

Eating dogs. Wow, what a kitty!

Didja see the video of the zoo idiots celebrating the change of the Chinese New Year by bringing a tiger cub and a bunny out for the cameras, then putting them on the same table? (Yeah, I”m sure that’s the “same bunny” later.)

Mountain Lions are no joke and that one is a monster. A few months ago I stumbled across a series called “Something Bit Me”. (I think it is on National Geographic) One of the episodes I watched was about a mountain lion attacking people mountain biking on a trail just outside of LA. Crazy scary and that lion was not nearly as big.

Every time a cougar eats a bicyclist, an angel gets its wings. Just saying.

I live about 35 miles from there. Derrick used dogs to tree the animal before he shot. That’s standard procedure so the animal can be identified as a mature male – you can’t shoot females or juveniles.

was wondering about that–stalking one of those on foot (especially on your own), while no doubt a rush, would be foolhardy indeed–not without a rigby or a shotgun in my hands

Man and dogs…. thousands of years of partnership in the hunt. So it was… so it is.

Regardless, I find it very sad this beautiful creature wasn’t relocated by the damn agency we pay to do that exact thing

He was a magnificent specimen, and yes I feel for the dogs he has killed, maybe we shouldn’t be taking all their space so they can live like nature intended and maybe we don’t need 40 million illegals to take up more space.
We won’t have any wild spaces left. We will be a country of cement, insects, rats and pigeons as we will have killed off all the other wild life
I can taste the crickets right now!

Ridiculous down votes, really…
He was a magnificent animal that deserved better if we are going to take their spaces and leave them hunting squirrels
He could have been captured and relocated to further his species with his magnificent genes
Now he dead and probably being stuffed as I write.
I don’t bemoan people protecting their lives, but I’m
Not about to move into a lions stronghold and then complain because he wants to live too…

Only someone who doesn’t know much of anything about cougars would post what you did. If they “relocated” it, chances are very high that it’d come right back. Cougars have VERY big ranges. If they “relocated” it far enough away, it was already habituated to humans and would find a different inhabited place to haunt.

Past that, there is no cougar shortage. It’s not as if he killed the last one. Those things have multiplied like crazy in the last 20 or so years.