Charles McGonigal allegedly tried to help a Russian oligarch get off the sanctions list…an oligarch who came up quite a bit in the probe. WEIRD. 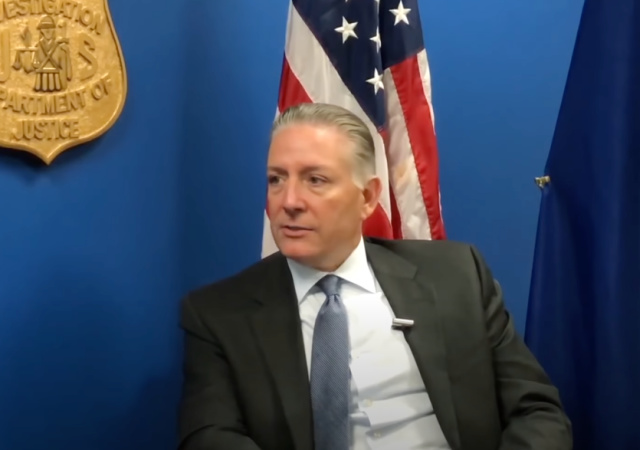 Charles McGonigal, the former FBI official in the counterintelligence division, faces charges of violating the U.S. sanctions on Russia by trying to help an oligarch get off the sanctions list.

The Washington Free Beacon mentioned, “McGonigal was one of the first individuals at the FBI to learn that a Trump campaign adviser had discussed Hillary Clinton’s emails with a foreign diplomat.” That conversation sparked the FBI investigation into possible collusion between the Trump campaign and Russia to win the 2016 campaign.

The oligarch McGonigal allegedly tried to help, Oleg Deripaska, came up in the Trump investigation due to his relationship with Paul Manafort since they shared “business dealings in Ukraine and maintained contact during the 2016 campaign.”

Deripaska told The Hill three years ago that he hired Christopher Steele to help him with a “research project.” Yes, the Steele who authored the infamous dossier.

During his time with the FBI, McGonigal knew of Deripaska due to the Trump investigation but also because he “supervised and participated in investigations of Russian oligarchs.”

The DOJ wrote in the press release:

In 2021, MCGONIGAL and SHESTAKOV conspired to provide services to Deripaska, in violation of U.S. sanctions imposed on Deripaska in 2018. Specifically, following their negotiations with an agent of Deripaska, MCGONIGAL and SHESTAKOV agreed to and did investigate a rival Russian oligarch in return for concealed payments from Deripaska. As part of their negotiations with Deripaska’s agent, MCGONIGAL, SHESTAKOV, and the agent attempted to conceal Deripaska’s involvement by, among other means, not directly naming Deripaska in electronic communications, using shell companies as counterparties in the contract that outlined the services to be performed, using a forged signature on that contract, and using the same shell companies to send and receive payments from Deripaska.

MCGONIGAL and SHESTAKOV were aware that their actions violated U.S. sanctions because, among other reasons, while serving as SAC, MCGONIGAL received then-classified information that Deripaska would be added to a list of oligarchs considered for sanctions as part of the process that led to the imposition of sanctions against Deripaska. In addition, in 2019, MCGONIGAL and SHESTAKOV worked on behalf of Deripaska in an unsuccessful effort to have the sanctions against Deripaska lifted. In November 2021, when FBI agents questioned SHESTAKOV about the nature of his and MCGONIGAL’s relationship with Deripaska’s agent, SHESTAKOV made false statements in a recorded interview.

There appear to be two separate sets of charges.

The one mentioned here was issued in NY and is related to his work for the Russian oligarch after retiring from the FBI.

The other issued simultaneously in DC relates to the $225,000 bribe he took in 2018 from a former foreign intelligence officer while still in the Bureau.

It looks a little like there is competition over who gets to nail him.

On second thought, it may be that they are trying to bury the bribery charge – at least in the initial reporting.

To me it looks much worse for the Bureau.

Actually, this looks more TYPICAL for the Bureau.

Rules for thee but not for the left.

The CIA is burning the op to the ground. Something came to light near last November’s election that makes this necessary. Biden won’t make it to summer. My 2 cents, it’s all about Hunter and the trail of money.

If you ever need a subject-matter expert, ask a Democrat official.

So one of the people behind the Trump investigations is dirty.

Am I supposed to be surprised?

Did he not stay bought?

The FBI corruption and scandals, just keep growing in leaps and bounds.

No MSNBC gig for McGonigal.

Little Charley, needs to spend some time at GITMO.

These Criminals aren’t are legitimate Government/ Law enforcement People. They are a group of deep state punks trying to take over our country , and their doing it from within. Biden is one of them and needs to be punished for treason