The DOJ actually went after people who attacked a pro-life pregnancy center. 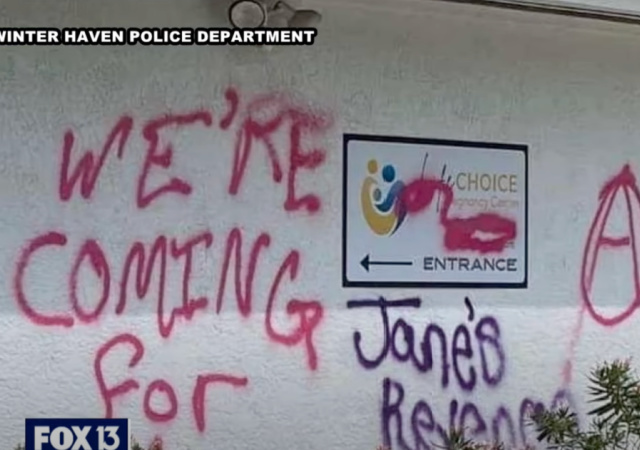 I had to read this twice. The Department of Justice finally charged people who attacked and defaced a pregnancy center!

From the DOJ press release:

The indictment, returned by a federal grand jury in the Middle District of Florida, alleges that Caleb Freestone, 27, and Amber Smith-Stewart, 23, engaged in a conspiracy to prevent employees of reproductive health services facilities from providing those services. According to the indictment, as part of the conspiracy, the defendants targeted pregnancy resource facilities and vandalized those facilities with spray-painted threats. According to the indictment, Freestone and Smith-Stewart, and other co-conspirators, are alleged to have spray painted threats, including “If abortions aren’t safe than niether [sic] are you,” “YOUR TIME IS UP!!,” “WE’RE COMING for U,” and “We are everywhere,” on a reproductive health services facility in Winter Haven, Florida. The indictment further alleges that facilities in Hollywood, Florida, and Hialeah, Florida, were also targeted.

The first attack occurred “on or about May 28, 2022,” in Hollywood, FL. Catholic News Agency reported the vandals hit the South Broward Pregnancy Help Center, which the Archdiocese of Miami runs.

The last one happened “on or about July 3, 2022” in Hialeah, FL. NBC Miami reported the thugs targeted the Pregnancy Help Medical Center.

Freestone and Smith-Stewart face “12 years in prison, three years of supervised release and fines up to $350,000.”

Both Freestone and Smith-Stewart were identified as members of Miami #antifa on our website in November of 2021.

Here's video of one of the Jane's revenge vandalism incidents. Freestone and Smith Stewart appear to be in the back. pic.twitter.com/wIjcMMWjNT

Unfortunately, these attacks are only a few that have happened since the Dobbs decision. Radicalists have attacked at least 78 pregnancy centers across the U.S. and hundreds of Catholic churches.

I want the vandals caught and punished as much as anyone.

You’re use of “pro-choice” and “anti-abortion” says a lot about your pro abortion sentiments. And none of it is good.

Thank you for your analysis.

Now look at the speed and man hours these jacka$$’es went at, and continue at, to capture and destroy J6 protesters who literally walked into OUR House!!!

Caleb and Amber look like a couple of winners, don’t they?

As Stacey McCain likes to say, “bad causes attract bad people.” I am going to go out on a limb and suggest that a forensic analysis of these two would find multiple past instances of bad behavior, multiple arrests for various misdemeanors and (perhaps) felonies, perhaps a few convictions, and some past history of drug abuse, mental instability, and poor upbringing.

ANTIFA is a bad cause. The rabid pro-abortion crowd is a bad crowd. The people who populate these bad causes look like Caleb and Amber: they’re losers. It’s time to call them, and their causes, out for that.

Those eyes say everything there is to say about the dangers of spray paint addiction.
And honey, not even yo mama wants that selfie.

To fuck or not to fuck is the first choice. To prevent conception is the second choice. To share responsibility is the third choice. To embrace compassion and mutual commitment is the fourth choice.

The wicked solution, the final solution, is neither a good nor exclusive choice to a had problem: keep women affordable, available, and taxable, and the “burden” of evidence aborted, cannibalized, sequestered in darkness.

That said, civilized society has a compelling cause to discourage human rites performed for social, redistributive, clinical, political, criminal, and fair weather progress.

The Pro-Choice ethical religion adopted by diverse Progressive sects deny women and men’s dignity and agency, and normalizes human life as negotiable commodities in the traditional convention of class-disordered religions.

Oh, and women and men have equal, not politically congruent (“=”), rights to self-defense through reconciliation.

Like Ms. Chastain I am boggled at the idea of the Federal government, under the control of the Left, taking any action to enforce the law against their own street thugs. Especially in a state that is NOT controlled by the Left. Something ain’t right.

I would expect our DOJ to award them commendations and maybe credit against any sentences imposed on them for later crimes.

I think the magic word here is Florida.
Garland can’t afford to be shown up as a hypocrite much more than he already has been, and if anyone is going to do it, it would be DeSantis.

One strongly suspects that the feds were forced into scrambling to get these two maggots into their legal process before the state of Florida got them into theirs.

Had the feds whiffed on them Florida’s DoJ most certainly would have done it themselves, with max publicity. It’s quite likely that the feds knew that and acted to avoid it.

Garland trying to build his credibility after letting Brandon get away with unsupervised searching for classified Docs and not going after Hunters laptop to both take heat off Brandon and go after Trump. Nice timing.

No domestic terrorism charges. The Democrat Reich Politboro doesn’t want to be too rough on its Blackshirts.