“freedom of religion means freedom from yours” 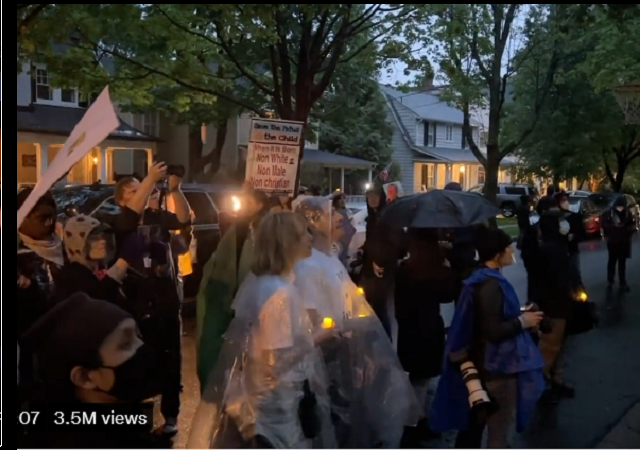 The media has pretty much given up on covering this, but the far left is still harassing Justice Kavanaugh at his home. You would think that the attempt on his life would have shut this down.

Icy rain drizzled down on the wealthy Maryland neighborhood as about 20 activists, organized by the protest group Our Rights DC, marched up and down the sidewalk in front of Kavanaugh’s home.

The protesters carried rainbow umbrellas decorated with pro-abortion slogans, singing and chanting as they marched, “cut his time short, a rapist should not rule the court,” “freedom of religion means freedom from yours,” and “no privacy for us, no peace for you.”

A number of U.S. Marshals, who protect the federal courts, were stationed just above the sidewalk on Kavanaugh’s property. The singing and chanting activists processed by the authorities using the sidewalk.

The Daily Signal asked the Marshals why they allowed the protesters to continue their demonstrations when 18 U.S. Code § 1507 forbids picketing or parading “in or near a building or residence occupied or used by such judge, juror, witness, or court officer” (both Maryland and Virginia law also prohibit picketing to disrupt or threaten to disrupt that individual’s “tranquility in his home”).

The religious tenet they wish to be free of is “thou shalt not murder.”
That being the case, a straightforward solution is obvious.

A better way to apply that principle would be to exclude a religion that was not present at the founding, unlike Quakerism, Unitarianism, Christianity, Catholicism, Judaism, etc. A religion Jefferson had to fight a war against because they were taking Americans as slaves.

Obama was wrong. This is not a Muslim country.

The founders, including Jefferson, explicitly said otherwise. They explicitly included Islam among the religions that would be on an equal footing in the USA, the government not being partial to any of them. There were a few Moslems in the USA at the time, though probably none of the founders were aware of them; but they did anticipate that Moslems might one day come, and declared that they’d be just as welcome as Christians or anyone else. And they signed a treaty with Morocco explicitly saying that the USA is no more a Christian country than it is a Moslem one.

The Daily Signal asked the Marshals why they allowed the protesters to continue their demonstrations when 18 U.S. Code § 1507 forbids picketing or parading “in or near a building or residence occupied or used by such judge, juror, witness, or court officer”

The reason is because the Signal deliberately or negligently omitted to quote the key part of that sentence. It’s only illegal if it is done “with the intent of interfering with, obstructing, or impeding the administration of justice, or with the intent of influencing any judge, juror, witness, or court officer, in the discharge of his duty”.

It’s clear that these protesters’ intent is not to prevent Kavanaugh from performing his job, or to influence his vote on any case. Even if that weren’t clear, in order for the marshals to interfere with them it would have to be clear that that was their intent, and that certainly isn’t the case. Therefore not only are they not violating the law, interfering with them would violate the first amendment.

That’s why the marshals are there to ensure none of them do anything more than protest, and that they don’t trespass on Kavanaugh’s property.

(both Maryland and Virginia law also prohibit picketing to disrupt or threaten to disrupt that individual’s “tranquility in his home”).

The VA law is plainly unconstitutional and thus not a law. The MD law appears on its face to be constitutional, but the Montgomery County DA is dubious about its constitutionality and has announced that he will not apply it to anyone, not just in this case but in any case. And he’s had that policy since long before these protests started. That is his privilege and the federal marshals can’t enforce it themselves.

The VA law is plainly unconstitutional and thus not a law.
I’m sure that…
1) That is not how this works.
2) Harassment is actually a crime in most places, and this constitutes harassment.
3) You can prove that “unconstitutional” bit.
4) The law would be equally enforced if it were a leftist being protested.

That actually is how it works. A purported law that is unconstitutional on its face is invalid, and any public employee who tries to enforce it has no qualified immunity.

Demonstrations on a public street outside someone’s home do not constitute harassment.

And yes, the Montgomery County DA is equally not enforcing the MD law no matter who is the protests’ target. He has announced this policy long ago and has stuck to it.

How dare the state AG not enforce state law? It’s for a judge to decide it’s unconstitutional, not a politician or a lawyer with an opinion.

The VA law, unlike the MD one, is not viewpoint-neutral. That makes it unconstitutional on its face.

The MD law is facially neutral, since it bans protests outside any private residence, but the DA has discretion on whether and how to enforce it, and he’s said that since enforcing it runs a serious risk of violating the right to protest, he won’t do so. That’s prosecutorial discretion.

The right to protest is important, and if you can’t do it on a public sidewalk where can you do it? There aren’t any areas that are far enough away from a private residence to satisfy the law.

Finally, no, they are not trespassing on Kavanaugh’s property. They are on a public street, which is a traditional public forum. They have the right to protest there, so long as they are not blocking traffic. And yes, they are pedestrian traffic; they are not standing and protesting, they are walking past, repeatedly.

That is not true. Harassment has a well-developed legal definition. This is not it.

Cf the cases establishing the Phelps cult’s right to demonstrate outside soldiers’ funerals.

Nope. Purported laws that are unconstitutional are not laws in the first place. And prosecutors routinely refrain from enforcing purported laws that appear to them to be unconstitutional. The VA law is plainly so, because it’s not viewpoint-neutral. The MD law is. And the federal law is not only netural, it treats the homes of judges, jurors, etc. exactly the same as it does courthouses.

They’re Schroedinger’s Laws. They may be not-laws, but they’re effectively not not-laws until some court has declared them not-laws. Until then, you can be fined and jailed under them, and you’ll get neither your money nor that portion of your life back no matter what some later court says.

Ask any gunnie who had his property confiscated under what turned out to be a not-law. “Sorry, it was melted long ago.” Exactly what’s happening to ex-owners of bump stocks as we speak.

That’s not true. A policeman who violates a well-established civil liberty loses qualified immunity, even if the legislature purported to make a law that the policeman is merely enforcing.

Prosecutors have absolute immunity, so they can’t lose it by enforcing a law they know to be invalid, but it’s still unethical.

Suppose a state legislature were to pass a law banning Islam; do you seriously imagine that it would be OK for a policeman or prosecutor to try enforcing that law and shut down a mosque?! The policeman would end up in prison and the prosecutor would be disbarred.

Can you cite a source for that “an unconstitutional law isn’t a law”, please?

“A Law repugnant to the Constitution is void.” — Marbury v Madison

trespass on his property?

If it’s like most developments, that sidewalk is his property, but there’s an easement allowing pedestrians on the sidewalk, utilities along the street, etc. I wonder if that easement actually includes noisy demonstrations that just stand there and harass.

As far as I know they’re not just standing there, they’;re walking past, repeatedly. And sidewalks are public streets, which are traditional public forums where regulations must not only be viewpoint-neutral but also content-neutral. Reasonable noise regulations can be and are being enforced. Protesters can’t block traffic, and that is being enforced. But you can’t stop them protesting, just as you can’t stop the Phelps cult from protesting outside soldiers’ funerals, or the Nazis from marching in Skokie.

What, nobody from Ruth Sent US?

Did they look up The Notorious RBG’s actual long-term public take on Roe v. Wade, n realize what clowns they were?

Naaah. That would require reading, thinking, and acting on their conclusions. What was I thinking.

What are you referring to? The fact that she didn’t think much of Roe’s reasoning? She still forcefully supported its outcome and repeatedly voted to uphold it. She would certainly support the protests, though not at her colleagues’ homes.

You make my point for me.

The Notorious RBG said often she’d have rather gotten outcomes that “flowed from” Roe a better way. She was in some writings even chary of sweeping sounding “rights” for what they might lead to. “Ruth Sent Us” advocates rather different things, and using rather different means; less informed and less nuanced.

“She would certainly support the protests, though not at her colleagues’ homes.”

“freedom of religion means freedom from yours”

Is that for everybody? Do we get to be free from your anti-human death cult? You know, along with Extinction Rebellion and the rest, maybe y’all should lay off imposing your doctrine on the rest of us.

The real problem in America right now is that the Progressive religion has captured society, in general. The vast majority of the electorate is progressive, even though they might think otherwise (because Progressivism lies about it not being a religion).

But Progressivism can’t maintain the society it has captured, as it throws out the primary elements of the religion that built it – Christianity.

What you said is worth parsing into two parts:

— There’s a general pattern of parasite people infesting n feeding off systems they didn’t build and don’t keep going. Can that be inoculated against? Better than for the ‘rona?

— Do the assumptions and arguments of Progressiveism lead to systems that work or can? Christianity? To resilient pest-proof systems?